"The talks must be resumed. If not, this conflict will drag on forever and will eventually cause utter destruction. No one will be spared. There will be no one left on Ukrainian soil. Everybody will have fled – leaving behind an endless battlefield. We will all bear the cost of this war, whose toll has already been extremely high.” This request was made by the Bishop of Chişinău, Monsignor Anton Cosa, in the aftermath of the explosions that occurred yesterday in Tiraspol, the capital of Transistria. "I am worried  about the provocations that may be launched from inside our country", the bishop added, which "risk creating yet more pretexts for the Russians to intervene" 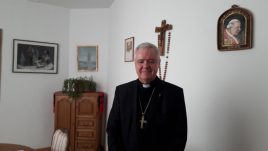 All of a sudden, yesterday afternoon, the clouds over Chişinău turned dark, and the city was overhung with ominous heavy rains. It felt like a sign of the high tensions on the border zone between Moldova and Ukraine. Then, the unexpected happened. Several explosions were heard yesterday near the Ministry of State Security building in Tiraspol, capital of Moldova’s breakaway pro-Russian region of Transistria, on the border with Ukraine, 30 kilometres from Chisinau. The blasts occurred two days after the missile attack in Odessa, while the Russian-led war is reportedly entering phase two – expanding into southern Ukraine and reaching Transnistria. This small breakaway enclave, unrecognised by any of the UN nations (not even by Moscow) is the result of an armed insurrection that took place after the fall of the Soviet Union in 1992. SIR interviewed Bishop Anton Cosa in Chişinău, whose territory also includes Transnistria with six parishes.

There was a missile attack on Odessa: are you worried that it may signal the possibility of the war moving closer to Moldova?

We are worried about it, yes. This strategy had been envisaged before the outbreak of the war, during the Beijing Olympic Games, as far as I remember. However, when we saw the massive resistance of the Ukrainian people, we felt that possibly the Russians would not succeed in gaining a foothold here. And even if they did, it would not be the same scenario that we saw in Ukraine because the Moldovans would not fight back. They would not resist. In fact, it would resemble the situation of Crimea.

Because half of the Moldovan population is pro-Russian. They were pro Russian before this conflict and are pro Russian today. This phenomenon is not easy to understand and to cope with. Half of the people support Russia. The other half side with the Ukrainians. Ours is a small and weak country, and we are divided.

For that reason I’m not afraid of a war or of possible external conflicts. What I am afraid of is that this crisis may spark off harsh confrontations between local pro-Russian and pro-Ukrainian communities.

Are you worried about a civil war?

I don’t think there will be a civil war, but rather unrest and clashes between the different groups.

Who are the pro-Russians?

Many people here in Moldova speak Russian. Many of them were born in Russia and moved here for work purposes, as used to be common practice in the former Soviet Republics. Many people used to work in Russia and they now receive their pensions from Russia, and perhaps other forms of welfare subsidies. So clearly there are still very deep ties. It is a very complex phenomenon. Then we have organised groups and parties that promote the ideology of full union with Russia, as it was under the USSR. Some people believe their future is with Russia and that only in that way can we survive as a country. Moreover, concerns about gas and oil shortages, the resulting price increases and Moldova’s dependence on Russia are all factors behind these decisions. This interdependence had been conceived and planned for all former Soviet countries. And then there is Transnistria, where the overwhelming majority of the population is drawn to Russia and where we have six parishes

Reports are emerging of Russian military activity in Transnistria. Are you worried about this military presence just a few kilometres from here?

It’s nothing new. Russian troops have always been stationed here.  We have always known it.

Yet reports suggest that the military presence has increased.

This was already happening. Ever since the 1990s, our politicians have been demanding that the Russians destroy those arsenals and that they commit to leaving the country. That did not happen, but we have lived in peace until now, without major worries.

In this delicate phase all provocations must be carefully avoided.

So what is the way forward?

Negotiations. That path was being pursued only a few weeks ago with the meetings of the Russian and Ukrainian delegations in Belarus and Turkey. I think negotiations are important, but I also think they should be supported by the presence of other countries at the negotiating table, acting as mediators. Negotiations between two parties lead to nothing. That’s the biggest challenge.

Negotiations must resume. If not, this conflict will drag on forever and will eventually cause total destruction. No one will be spared. There will be no one left on Ukrainian soil. Everybody will have fled – leaving behind an endless battlefield. We will all pay for this war, which is already having a very high cost.

After Ukraine and Georgia, also Moldova has formally applied for European Union membership. How do you interpret the people’s desire to join the EU?

Rather than a desire of the people, I think there was an invitation to take a step forward in the wake of Georgia and Ukraine. It should be remembered that the whole government – the President and a large majority of MPs – are pro-European. However, even within the ruling majority, not all are convinced that now is the right time to take this step.

We must be careful not to poke the bear too much, because it may retaliate if disturbed.  Caution is needed.

What worries you most at the moment?

I am concerned that this war could drag on, with the Russians claiming victory while the war will continue killing more people on the ground every day.

I am also worried  about the provocations that may be launched from inside our country, which risk creating yet more pretexts for the Russians to intervene.

Not in exactly the same manner. I think that provocations are dangerous for us, so we should be very careful. What do I expect? I think that we have grown as a country and I hope that we will be able to harness all the positive strengths that we have discovered, so that the country may remain faithful to its true vocation, which is to be a Christian country that hopes to learn from the European Union all that is good, regardless of whether or not it joins the EU, and at the same time pursue new relations with the Russians and the Ukrainians with a view to building not only peace but, through peace, to achieve prosperity, which the Moldovan people and the country are longing for.