Monsignor Kryvytskyi, bishop of Kyiv, speaks out for the first time, having seen the scenes of massacre and destruction in the cities of Bucha, Irpin, Gostomel, Vorzel. He lists them one by one because he knows them very well, along with all those who "were living there happily and peacefully.” “Everything has changed. These towns," he says, "have been scarred by wicked people, afflicted by acts of barbarism, targeted by hatred. There is no possible justification for these crimes committed by the Russians. I am aware and certain that all those responsible for these crimes will be punished in due time. For the moment, we are suffering and enduring the sorrow with the people. Our hearts are broken with grief. We mourn all the victims."

“I have visited the towns of Bucha, Irpin, Gostomel, Vorzel’, and all the towns around Kyiv. I know them well. They were very pleasant, beautiful, peaceful places. I also knew many of its residents. Happy people who lived there in peace. Everything has changed over the course of the past month and this conflict came as a shock to me.” Msgr. Vitalii Kryvytskyi, 49 year-old Salesian priest and Latin-rite Catholic bishop of Kyiv and Zhytomyr, shares his thoughts on the news and the images depicting the tragedy unfolding on the outskirts of the capital. An endless expanse of rubble, destruction, dead bodies and mass graves. “Today these cities have been scarred by wicked people, afflicted by acts of barbarism, targeted by hatred,” he says.

There is no possible justification for these crimes committed by the Russians. I am aware and certain that all those responsible for these crimes will be punished in due time. For the moment, we are suffering and enduring the sorrow with the people. Our hearts are broken with grief. We mourn all the victims.”

It has been described as a genocide. Is that true?

I have no doubt that it won’t be long before the right words are found to describe what has happened. For sure, all these crimes, all the atrocities that were committed in these cities have no possible justification. We feel that as Ukrainians we are victims of hatred. This sentiment has been building up over the past years in Russia. And today that hatred has inflicted deep wounds on the Ukrainian population. As a Church, we must ensure that this hatred does not enter our hearts, we must strive to ensure that this hatred does not find its way into our lives today.

My point is that hate is not the answer. It is only through forgiveness that this hate can be overcome and ultimately achieve justice. 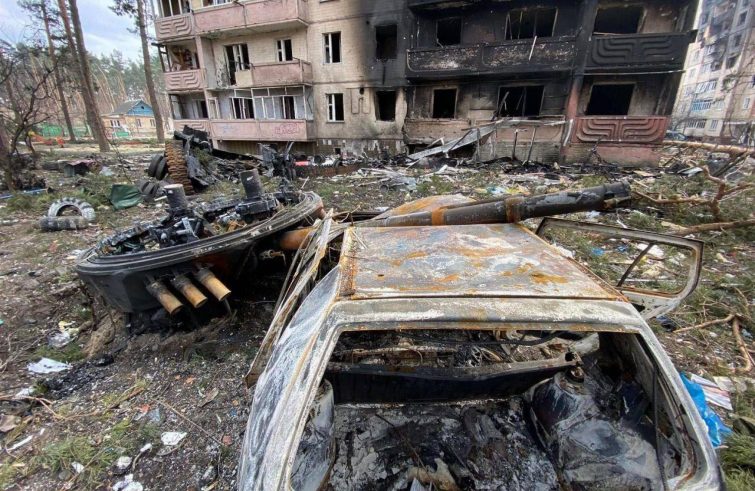 The Russians have wreaked utter devastation. How can cities be rebuilt and people’s hearts be healed?

We have been talking with the Ukrainian government about rebuilding our country when the war ends.

Looking at it at first glance, the amount of work that awaits us, along with the huge amount of money that reconstruction will certainly require, is a source of some concern. But when we see the unity of our country and our people, how they fought against the occupation, we realise that Ukrainians will also be united in restoring beauty to our country. And the show of solidarity that has come from all around the globe makes us certain that we will be helped. All this time we have felt the strong solidarity and support of the world.

I am convinced that we will not be alone in these reconstruction efforts in the future, including after the war. I also know that Russia will have to answer for all the destruction it has caused in Ukraine and for all the war crimes it has committed in our land.

Pope Francis has expressed his sorrow for what happened in Bucha. What would you like to say to the Pope today?

I thank Pope Francis for being so close to the people of Ukraine. I am grateful for every prayer for peace that he has raised up to God. I am grateful for every word he addressed to the world to stop the war. I give heartfelt thanks for the consecration of Russia and Ukraine to the Immaculate Heart of Mary. We have asked for Russia’s conversion and for Ukraine to have the strength to resist this invasion.

Pope Francis has said that a visit to Kyiv “is on the table”. How important is this visit for you and for peace? Do you believe it could be feasible? Are you working towards its accomplishment?

I want to thank the Pope for his wish to visit Kyiv. This journey to Ukraine had been envisaged already, before the war broke out. I have no doubt that the Pope’s visit would send a further sign of love and support for the Ukrainian people. Nevertheless, I realise that at this stage of the war, with the ongoing fighting, such a journey would be difficult, if not impossible for now. But the Pope’s visit to Ukraine will become possible when peace is restored, and it will bring great joy and hope to our people.