The words of Father Giovanni Guaita, an Orthodox priest based in Moscow, author and signatory of a letter wherein 300 Orthodox clerics (priests and deacons) call for peace and for the cessation of the conflict in Ukraine. He commented on the Moscow Patriarchate's “silence”: “We must remember that Patriarch Kirill is the head of a Church representing faithful of Ukraine, as well as of Russia and Belarus. His position is therefore extremely sensitive, difficult and uncomfortable. But the Church - he adds - is not only the Pope or the Patriarch. It is where two or more people stand united in the name of Jesus Christ. There is a public opinion also inside the Church, which, in my view, is maturing and growing”

“I am not afraid because I think that a priest, a Christian person must first of all respond to his conscience, to God and to history. According to a logical order Christians of course recognise the authority of the State, but they are aware that there are greater authorities they must respond to, such as human conscience and God”, says Giovanni Guaita, a priest and monk of the Russian Orthodox Church born in Iglesias, Italy. He carries out his ministry at the Saints Cosmas and Damian church in the centre of Moscow. He is among the drafters of an open letter, signed by 300 Russian Orthodox clerics, calling for peace and the cessation of the conflict in Ukraine. This is a bold stance, given the latest steps of the Russian government aimed at clamping down on and monitoring dissent. It has been established that disseminating fake news is a criminal offence punishable with up to 15 years in prison. For instance, even the use of the term “war” instead of “military operation” to refer to the events in Ukraine may be sufficient to be charged with spreading “fake news.” The Russian Federation also stipulates the confiscation of the assets of foreigners living in Russia should the latter be deemed detrimental to the interests of Russian citizens and the State. This decision has caused much apprehension among foreign journalists and correspondents. Giovanni Guaita promptly remarks: “Like many Russian citizens, I am extremely saddened and pained by the news from Ukraine.

These are extremely serious events. For a Christian believer the situation is all the more serious since Ukrainian people are our brothers and sisters in the faith, faithful of the Russian Orthodox Church of the Moscow Patriarchate.” 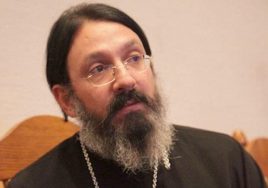 Seen from Italy, Patriarch Kirill’s silence is surprising. Why is he so hesitant about this war?

There is a major underlying historical aspect. The attitude of the Orthodox Churches and that of the Catholic Church with respect to the secular authority of any State are diametrically opposed to each other. This is due to the different historical heritage of the two Churches. In fact, when the Western Roman Empire fell after the sack of Rome, Rome was left without secular power for a very long time, and the Pope found himself in the position of having to take on political responsibility and reconcile, for better or worse, spiritual and temporal power. And even when secular authority was established, with the coronation of Charlemagne, the emperor was far away and the papacy continued to play a very strong political role. The opposite occurred in Constantinople, where for a thousand years after the sack of Rome the Patriarch was at one with the Emperor. There was no need for him to play a political role. In fact, he was totally subservient to the Christian emperor, who convened councils, battled heresies and dismissed the bishops. This is a very cumbersome historical legacy.

It should also be noted that the Orthodox churches are national churches, which means they are identified with a specific people, culture, territory, as well as with the rulers of the country concerned. This identification is still very difficult to be avoided today.

Faced with a martyred and massacred people, whose ties include a bond with the Orthodox Church and its traditions, why is it so hard for Patriarch Kirill to  express his horror, closeness and solidarity?

We must remember that Patriarch Kirill is the head of a Church representing faithful of Ukraine, as well as of Russia and Belarus. His position is therefore extremely sensitive, difficult and uncomfortable. I personally and many others in the Church – both lay persons and priests and probably also bishops – would appreciate a clearer and more explicit stance. It can be said that up to now it has been rather implicit. The Patriarch has asked to pray for peace and for an end to all violence. We would have expected something more. Metropolitan Onufriy of Kiev, head of the Ukrainian Orthodox Church belonging to the same Moscow Patriarchate, has been much more explicit, sending a heartfelt appeal to Putin, as well as to all the faithful. But the Church – he adds – is not only the Pope or the Patriarch. It is where two or more people stand united in the name of Jesus Christ. Therefore, the opinions and the wishes of the faithful are somehow also the opinions and wishes of the Church.

I think it is a matter of time. There is a public opinion also inside the Church, which, in my opinion, is maturing and growing. However, it is only a minority for now.

How long will it take?

The Church is part of history. She is the product of her own history and her own people, and she grows with them. It would be desirable for this journey of maturation to be much faster, but we must reckon with reality.

I firmly believe that the critical mass who consider justice, truth, peace, as established values, not subject to being questioned for political or strategic gains, is growing. In the Holy Scriptures, God needs only ten righteous men to save a city.

Are you worried that the hesitancy of the Moscow Patriarchate may in some way harm ecumenical dialogue?

I especially worry about living up to our calling, rather than to the ecumenical community.

I also worry about what our faithful are thinking and will think in the future. From a historical perspective, I wonder what will be written about us and these events in the future. This is a very serious question that we need to address. I am also concerned about the ability of the Russian Orthodox Church to form people’s consciences, helping them to distinguish good from evil. Indeed, a Church that is incapable of doing this is a very sick Church. I hope and pray that this is not the case.