Mobile phones ring non-stop at every border crossing with Ukraine. People calling are mostly friends or acquaintances, sometimes friends of the refugees' relatives. They call to make arrangements to meet up once the refugees have crossed the Polish side of the border. But mobile phones ring also when missiles fall in Ukraine, where an app has been especially developed to alert people of shelling, and to descend into basements and shelter in cellars, while waiting for the shelling to end

The Rivne nuclear power plant, one of four currently operational on Ukrainian territory, is the closest to Poland. It is located less than a hundred kilometres from the border. President Putin reportedly assured the EU on Sunday that he has no intention of bombing the nuclear plants, but Jarek is nevertheless worried. His parents, who feel they are “too old” to flee a country at war, have remained in Rivne, where he was born 38 years ago. They are being cared for by his brother and his sister. Jarek has twelve siblings. Some of them work with him at a small contractor’s near Warsaw. Last week, Jarek managed to bring to his home one of his sisters and her child who had fled Ukraine. “Now they are safe and sound, but my sister’s husband stayed behind to combat the war in Ukraine” he says. Just like many other husbands – whose wives and children are crossing the Polish border by the hundreds of thousands.

Jarek travels back and forth from his home to one of six border crossings between Poland and Ukraine, bringing exhausted women with their frightened children to the Polish capital. To this day, there are over 150,000 refugees in Warsaw alone, more than a million throughout Poland.

“I am bringing a mother and her three children from the border. Will you be able to host us?” an Ukrainian youth whom she hardly knows asks Janka – one of the many volunteer workers who have offered their help in Warsaw over the past days. He phones her Sunday morning, while she is driving from the Korczowa border crossing to the capital city. Since Janka has not enough room to host a family with three children, she makes a few phone calls and solves the problem within an hour. She will accommodate a woman with one child in her home, while the mother with three children will be hosted by another family with a larger flat. 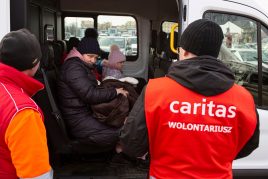 “To be honest, none of these mothers are planning to stay in Poland for a long time. They are hoping to return as soon as possible to their homes, even if their homes have been devastated by bombs,” says Giovanna, who works at a refugee centre hastily set up in the Torwar ice stadium in Warsaw. She says that most women have brought with them all the necessary items for their children. Blouses, pyjamas, shorts and rompers – all spotlessly clean, starched and ironed to perfection – were placed in backpacks and small suitcases along with their children’s favourite teddy bears or dolls. But in many cases the mothers had no time to collect their own personal items, which makes it even harder for them to spend many hours waiting to cross the border. Before the heavy shelling destroyed the airport in Vinnycja, in central Ukraine, Siergiej and Maria, both in their eighties, left their home headed for Poland, to eventually meet up with their son who lives in the United States. When they left, they could have foreseen that they would never return. They left their grandson behind in Ukraine. “The boy has joined the army,” they say. At the Medyka border crossing, a Polish girl hurriedly arranges chairs for them to rest before resuming their journey. Beside them, lying on the ground, lie two small bags with their lifelong memories.

Mobile phones ring non-stop at every border crossing with Ukraine. People calling are mostly friends or acquaintances, sometimes friends of the refugees’ relatives. They call to make arrangements to meet up once the refugees have crossed the Polish side of the border. But mobile phones ring also when missiles fall in Ukraine, where an app has been especially developed to alert people of shelling, and to descend into basements and shelter in cellars, while waiting for the shelling to end. 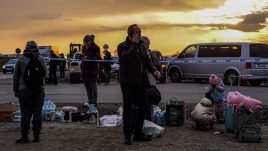 It would appear that the border crossings on the Polish are in a state of utter chaos. Border guards, police, firefighters, are all prepared to transport with their vehicles the refugees to relief centres set up by local authorities, by Caritas, NGOs and Polish civilians, providing food, accommodation and other necessary items to support to those in need. Many of them hold signs that indicate the city they are headed to. Thus, in spite of the confusion, amidst the crowds of disorientated people, amidst people distributing food and beverages, clothing items, blankets, personal hygiene products – and some good advice – every few minutes a car, a van or a bus loaded with passengers leaves for a Polish city, sometimes as far as 700 kilometres away, at the opposite end of the country.

US Secretary of State Anthony Blinken, on an official visit to Poland, has also travelled to the border areas over the past few days to assess the situation in person.

“Now the most important thing is to ensure that these people fleeing from the war can support themselves. Jobs have to be found for them, the children have to go to school, the youngest to nursery school”, says Olga Burova, an Ukrainian woman who moved to Poland ten years ago. She works as a teacher in a school for disabled children. She is now helping refugees. She appreciates the warm welcome of the Polish people: “Even families with disabled children offer to take in mothers with children with disabilities since their homes are already specially equipped to accommodate a disabled person. However, she points out, the most important form of support now is to be given inside Ukraine to those who are fighting. Carts full of basic necessities are pushed through the border crossing with Ukraine for people waiting for days in endless queues at the border.  But also trucks and buses loaded with foodstuffs and miscellaneous products pass through the border crossings to the war-torn internal areas of the country. These vehicles then return to Poland, are replenished, and depart again. “The Polish-Ukrainian border has de facto disappeared”, said President Zelensky a few days ago, thanking the Polish authorities for their help and support, including on the international stage.

In fact, over the past few days Poland has gone to great lengths to help the population of its neighbouring country. According to the latest news, the Polish authorities have decided to grant Ukrainian citizens full social security benefits for families with children, and to coordinate nationwide assistance so that all refugees may find accommodation and possibly employment. No one plans to build walls along the border with Ukraine any more, while reports of difficulties for some non-Ukrainian refugees at border crossings have proved groundless or even “fake news.” “All persons fleeing war are welcomed into Poland”, the Polish Interior Minister emphasised on Sunday, thereby rejecting the assumption that Ukrainian border guards are causing difficulties for refugees entering Poland, especially those from African countries.

Renowned Ukrainian writer Oksana Zabuzhko arrived to Poland on February 23rd, the day before the Russian invasion of her country, hoping that she could return to Kiev a few days later. Now she too is in need of protection and assistance. She vehemently rejects a stereotypical view of Ukraine as divided into a Catholic western region that is EU-friendly and speaks Ukrainian, and an eastern region that is pro-Russian because of its Russian-speaking population. She dismisses the notion of “a legendary great Russian people with a fascinating and exotic soul” mentioned by both Putin and Patriarch Kirill last Sunday. Instead, Oksana Zabuzhko highlights the diversity of languages, cultures, faiths, customs and traditions that have always characterised the peoples living on the eastern-western border zones.