Interview with Msgr. Paolo Pezzi, Archbishop of Moscow, at these critical moments of tension for peace on the Ukraine-Russia border. “As the Holy Father said last Sunday, how sad it is, when hatred, violence and misunderstanding occur among Christian peoples," the archbishop said. "We need to truly believe in the power of forgiveness. It is necessary to restart from forgiveness. Forgiveness requires a conversion of the heart because it involves transforming the way we view the other person. Admittedly, it is a miracle. But we must not overlook the overwhelming power of prayer”

“We have been monitoring this situation for several weeks now in an atmosphere of prayer. Prayers for peace in Ukraine are offered at every Mass. During these days we also recalled an expression of John Paul II: when the powerful of the world meet, the Church prays.” News of mounting tensions of war and fighting in Donbass, on the border with Ukraine, are being followed with apprehension also from Moscow.

SIR contacted by telephone Msgr. Paolo Pezzi, Archbishop of Moscow and President of the Russian Bishops. “It has been our attitude in these last few days”, said the archbishop as news of bombings, artillery exchanges, casualties and military drills arrive from the battlefront along the border. He added: “Together we strive to share the suffering, the anguish, the uncertainty that the local peoples must be facing.” 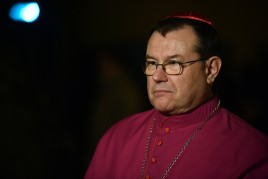 Is there a danger of attacks also in Moscow? Is the population worried?

This I cannot say based on what I see, but my vantage point is relative and limited. Indeed, what I have noticed in our community is a shared spirit of prayer as well as of anguish and suffering. We are experiencing this situation together in a spirit of communion.

Great efforts are being made at a political and diplomatic level to avert a military escalation and work towards a de-escalation of the hostilities, in order to ease the tensions.

What is the alternative? What is at stake?

I am neither a strategist nor a politician. What I do know is that, as the Pope said on Sunday, how sad it is, when hatred, violence and misunderstanding occur among Christian peoples.

In the light of this paradox, what is the role of Christians in Europe?

On Sunday, I told our community that we must genuinely believe in the power of forgiveness. It is necessary to restart from forgiveness. Forgiveness requires a conversion of the heart because it involves transforming the way we view the other person. Admittedly, it is a miracle. But we must not overlook the overwhelming power of prayer. Naturally, it is a miracle. However, we must not forget the great power of prayer. And it is not the kind of thing one does when there is no other option.

Prayer touches not only the human heart, but also the heart of God, as we learn from St Theresa. We must have faith in this. We must not be afraid. Let us wholeheartedly and truthfully pray to God to bestow upon us the miracle of forgiveness.

It seems an impossible task. This is a war, a wound that has been bleeding for eight years. Hearts have grown hard. Is forgiveness possible?

Forgiveness is not only possible, it is necessary. There is no other way. This is what Our Lord has entrusted to us. There are no magic solutions to problems. Whenever human freedom is at stake, an initiative is possible. And positive initiative is forgiveness, offering and desiring mercy.

A few days ago, the Russian ambassador to the Holy See Aleksandr Avdeev said that preparations are under way to schedule the second meeting between Pope Francis and the Patriarch of the Russian Orthodox Church, Kirill, in June or July. In the light of these challenging peace talks, how important is it for the leaders of the Christian Churches, in Moscow and Rome, to meet?

I think it can be of great help. Suffice it to recall the historic meeting between Pope Paul VI and Patriarch Athenagoras in Jerusalem at the close of the Second Vatican Council, and the declaration of mutual forgiveness that they signed.

We saw what happened afterwards, in the years to come, with a steady increase in meetings and significant dialogue initiatives. Naturally, we should not expect for things to happen as if by magic, but forgiveness definitely gives an impetus to peace, justice, and social and economic recovery. The power of forgiveness works in all directions.