"We instil hope when we don’t turn a blind eye to those in need, when we don't raise walls at our borders, when we fight every form of injustice" - the President of the EU Parliament said in his Christmas message to European citizens. Sassoli leaves behind a legacy of words and deeds that help us understand Europe today and - perhaps - envisage the Europe of tomorrow

“See you again after the holidays. Best wishes!”: these are the last words I heard from David Sassoli. With that generous smile he had accustomed us to. It was 15 December last. We were queuing for a PCR test at the European Parliament. During the morning we had conversed about a common project: he addressed the matter again in the afternoon. Then the test, and off to Brussels, where the European Council was to take place the following day. He opened his last summit, as always, with a passionate, demanding, programmatic speech. With a vision of the future.

David Sassoli, 65, passed away during the night at Aviano’s Oncology Referral Centre (CRO), where he was admitted on 26 December. His friend and spokesman Roberto Cuillo had announced yesterday that he had been hospitalised “owing to the onset of a serious complication caused by an immune system disorder.”

David Sassoli was born in Florence but grew up in Rome. Married with two children, a former journalist and popular anchorman on RAI’s national TV news service Tg1, he was first elected to the European Parliament in 2009, re-elected in 2014 and 2019. He was elected President of the European Parliament on 3 July of that same year. Sassoli died while still in office: the election of his successor is scheduled for next week’s plenary session in Strasbourg.

He contributed his analytical and communication skills and, above all, a passion for the common good to his political commitment, which was reflected in his reputation as a credible leader.

I heard him recall the founding values of the European Union on numerous occasions. He made explicit reference to the “founding fathers” and to Pope Francis’ countless speeches on European integration. Sassoli believed in a Europe of peace and solidarity, “united in diversity.” Freedom and social justice were two pillars of his commitment. He highlighted the central role of citizens in European political and democratic processes.

It can be said today, in all conscience, that more than one friend and some analysts had mentioned his name as a possible successor to Mattarella as President of the Italian Republic. 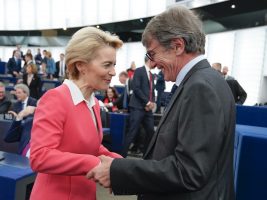 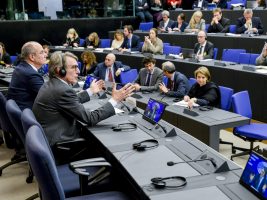 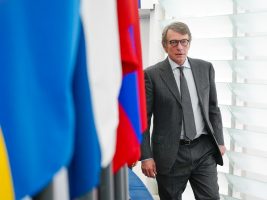 Throughout his institutional duties, in his official speeches, press conferences and informal meetings in Strasbourg and Brussels, he repeatedly drew attention to a number of challenges facing Europe and the world, namely upholding human rights, prioritising fragile and marginalised members of society, responding to the migration crisis and the obligation to welcome immigrants, ensuring sustainable economic development, supporting employment, providing opportunities for young people, combating climate change, the digital horizon, international cooperation and promoting peace in all parts of the world.

He had sent his Christmas greetings with a touching video message: “This year we have listened to the silence of the planet, we have been afraid but we reacted, building a renewed solidarity, because no one is safe alone.” “We witnessed the creation of new walls and at times our borders became boundaries separating the moral from the immoral, humanity from inhumanity. Walls erected to reject people seeking shelter from the cold, from hunger, from war, from poverty.” Sassoli added: “We have fought alongside those demanding more democracy, more freedom, alongside women demanding rights and protection. Alongside those who ask for their thoughts to be protected. Alongside those who continue calling for free and independent information.”

“We have finally realised, after years of harsh rigour, that inequality is neither acceptable nor tolerable, that living in precariousness is inhuman, that poverty should not be concealed: it must be confronted and defeated”.

Sassoli pointed out: “European institutions have a duty to protect the weakest and not demand more sacrifices, adding pain to the suffering. With the Recovery Plan, Europe is providing us with a great opportunity to break away from indifference. Our challenge is to create a new world that respects people and nature, one that believes in an economy based not only on the profit of the few but on the wellbeing of all.” He concluded: “for this reason I wish you happy holidays, Merry Christmas, Happy New Year. Christmas is the time when hope is born. And we are that hope when we don’t turn a blind eye to those in need, when we don’t raise walls at our borders, when we fight every form of injustice. Best wishes to us, best wishes to our hope”.

Commitment and hope: the legacy of the man David Sassoli.