The Assembly was held in Frankfurt from Thursday 30 January to Saturday 1 February, marking the “preliminary phase” of the process. "I am feeling confident" commented Card. Reinhard Marx, President of the German Bishops. "My expectations have been fulfilled", remarked Thomas Sternberg, President of the Central Committee of German Catholics (ZDK), who is conducting the process of dialogue between the laity and the bishops based on the same principles; 230 delegates from the German Catholic Bishops' Conference - half of them lay people - priests, men and women religious attended the meeting

The synodal journey of the German Catholic Church has begun. The Assembly held in Frankfurt from Thursday 30 January to Saturday 1 February marked the “preliminary phase” of this journey. “I am feeling confident” commented Card. Reinhard Marx, President of the German Bishops. “My expectations have been fulfilled”, remarked Thomas Sternberg, President of the Central Committee of German Catholics (ZDK), who is conducting the process of dialogue between the laity and the bishops based on the same principles; 230 delegates from the German Catholic Bishops’ Conference – half of them lay people – priests, men and women religious attended the meeting. The rules of this process were defined in Frankfurt, prayers were recited, the issues at stake for each of the chosen themes were outlined, and participants selected to prepare the texts to be discussed by the assembly. But it was not an easy start.

Power and division of powers inside the Church; priestly life today; women in Church services and ministries; love and sexuality are the subjects that will be addressed in four workshops highlighted as problematic in the “MHG study”,

the overwhelming paper published in 2018 on the subject of sexual abuse in the Church in Germany. According to the study, these issues furthered the onset of a fertile ground where abuse became possible. The assembly approved all 35 members selected for the workshops – although causing some discontent as they represent only a fraction of all delegates. In Frankfurt some of the issues at stake were put on the table.

Power: “Veritable reforms in the area of power and separation of powers are necessary and feasible for the good of Church mission,” said the Bishop of Speyer Karl-Heinz Wiesemann. The key words reiterated during the meeting were “clericalism”, “co-responsibility”, “participation.” “We have witnessed the emergence of a theology of the Church, a spirituality of obedience and a ministerial practice that unilaterally link this power to ordination and sanctify it in a way that shields it from criticism, control, and prevents it from being shared”, explained Claudia Lücking-Michel, who introduced the theme together with the bishop. “Much can be done at the local level in this regard”, the Bishop of Passau Stefan Oster, a member of the small group of bishops who are most critical of the synodal path, commented to SIR.

Priesthood: It is necessary to start by asking ourselves how to live “our mission as People of God in an increasingly secularized society,” said Bishop Felix Genn, and subsequently reflect on “the role of the priest in his service to the People of God,” on the meaning of “sacramentality,” but also on the paths of preparation for the priesthood, selection of candidates, styles and forms of priestly life. Strong stimuli and testimonies emerged from the debate: “We were a group of thirty during our studies, nine of us were ordained priests, and now we are only four”, said one delegate. “Loneliness”, the perception of “distance, bureaucratization, spiritual fragility”; the “work overload” and the dramatic decline in the number of priests, were among the issues discussed. Including, of course, the question of celibacy: the bishop of Osnabrück Franz-Josef Bode suggested the possibility of there being “two distinct forms, celibacy and non-celibacy”; the expression “married priesthood as a prophetic figure” was also brought up. 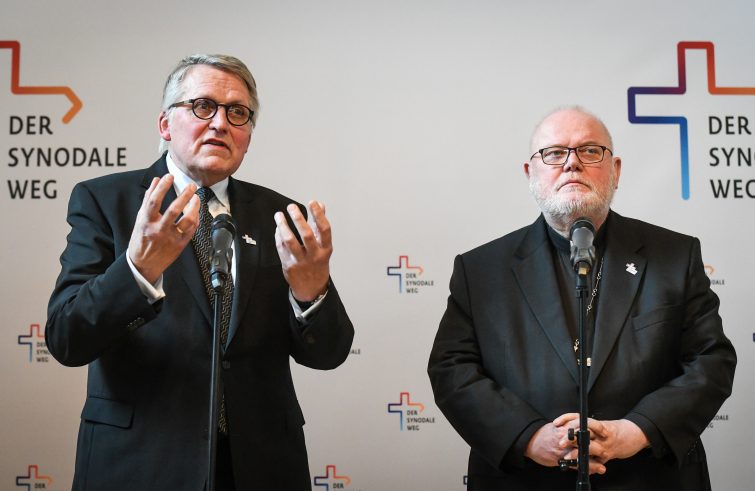 Women: a cross-cutting theme. For Bishop Bode, the role model of the relationship between women and men in the Church, “is Mary and John under the cross”; “Jesus was made flesh, not male”, he stressed. “The question of women touches on important dimensions such as evangelization, credibility and justice.” Tackling this issue today is of vital importance for the future of the Catholic Church, according to theologian Dorothea Sattler. “Controversies are to be expected on this point,” she added, encouraging reflection “not only on sacramental life, but on what can already be done today,” such as putting women in leadership roles. A heated debate took place in the plenary hall: women associations collected 153,000 signatures calling for ordination of women to priestly office; young women are no longer willing to “accept and obey”; “reality transcends the Magisterium”; the exclusion of women from ministry casts “a shadow over the advocacy efforts of the Church in the area of human rights.”

Sexual morals: also this subject was introduced by a bishop and a lay woman (Bishop Michael Gerbere Birgit Mock): “in this area Church Magisterium is not perceived as orientation but as a moral prohibition”; it is necessary “not to break away from doctrine but to be open, to change, so that it may give orientation and be of service to the people.” Also this issue was received with evident polarization. Janosch Roggel, one of the 15 under-30 delegates of the assembly, thus took the floor: “I am a transsexual. And abuse by a priest was the worst thing I have ever experienced.” The audience was speechless. At the end of his speech a round of applause broke out in the assembly hall, including standing ovations.

This path will lead to “decisions and clear vows”, that is, indications, that will be of three types, President Thomas Sternberg explained: “vows” attainable in Germany; others submitted to the Pope while others “may be addressed to a council that a Pope may one day convene.”

Card. Marx defined the Frankfurt days as an “attempt to accomplish something new”, albeit “difficult”, on a ” spiritual journey” that involves persons seeking to “progress in evangelization.” For the Cardinal it is clear that “caution” is needed, that there are “great expectations as well as concerns.” However, with the passing of the hours and days, it became clear that the possibility of a dialogue “at eye level”, as a German expression goes, is enriching, and that confidence is a leading factor.  Yet the grave declarations of the Cardinal of Cologne Rainer Woelki in an interview with the radio station domradio.de put a damper on the meeting prior to its conclusion. In fact, according to the Cardinal, the assembly was “manipulated” with the working modality resembling that of the “parliament of a Protestant Church”, while the “hierarchical dimension of the Church” was “being questioned” by some practical decisions. Cardinal Marx rejected the accusations: “In a few days I will meet the Pope and report to him about the Assembly” he told journalists. The Episcopal Conference will meet again in Fulda coming March. A new assembly will be held in September.