Today, November 5, Rome will see huge mobilisation for peace. Local and national associations, movements, trade unions will all take to the streets. Almost 600 unions will be calling for an 'immediate ceasefire' and for ‘peace talks.’ “All nuclear weapons must be banned, solidarity with the Ukrainian people and with the victims of all wars”, is the slogan of the demonstration. For Francesco Vignarca, coordinator of the Italian Peace and Disarmament Network campaigns, “a huge crowd of people” will be present, because “peace requires everyone's support” 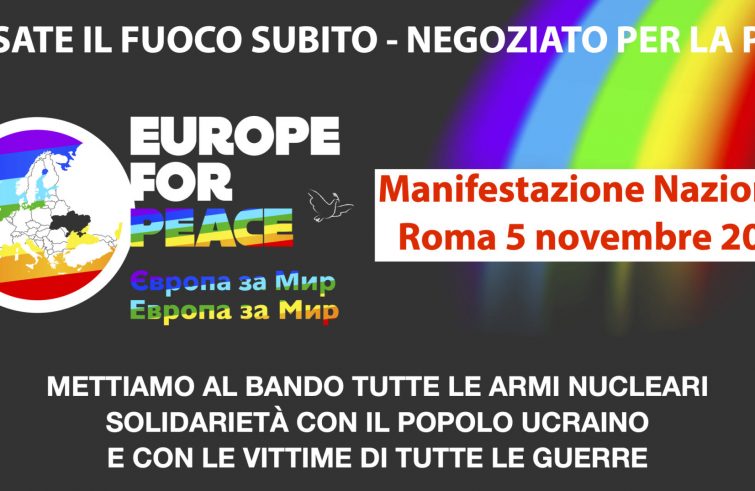 “This is a decisive moment that on the one hand is marked by the escalation of conventional warfare causing increasing deaths and on the other by the possibility of a nuclear attack. Today more than ever is the right time to announce a ceasefire and to start negotiations.” Interviewed by SIR, Francesco Vignarca, coordinator of the Italian Peace and Disarmament Network campaigns, thus describes the motivating elements that are driving a growing number of associations, organisations and movements to take to the streets today calling on Italy, the European Union, the Member States and the United Nations – the “platform”‘s statement is available here – to “take charge of the peace negotiations in order to stop the escalation and secure an immediate ceasefire”. Europe for Peace organised a national demonstration, supported by almost 600 different groups. A procession will depart from Piazza della Repubblica at 1 p.m. directed towards Piazza San Giovanni, Vignarca told SIR.

Hundreds of local and national associations, movements, trade unions have adhered. More continue coming in. We were informed that participants have already organised train and bus services to attend the march.

Representatives of associations and organisations are scheduled to speak at 3pm, but there will also be testimonies, including eyewitnesses of the conflict in Ukraine.”

This commitment for peace and nuclear disarmament in fact dates back a long way. 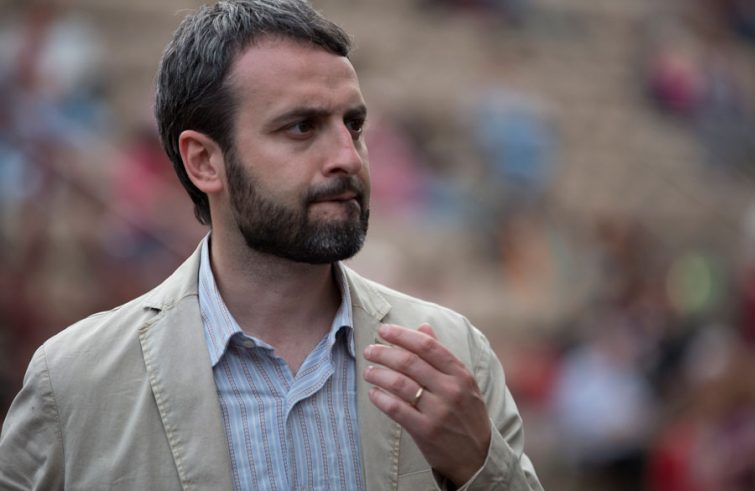 We have consistently focused on armed conflicts, expressing the aspiration to create pathways for peace. It is the request coming from civil society, from cities, from communities, from households. With regard to the conflict in Ukraine in particular, we promoted a number of initiatives since the start of the war. The first demonstration took place on February 26, two days after the invasion, followed by the peace caravans of the Stop The War Now network on April 2, and peace rallies throughout Italy.

Our actions are nothing more and nothing less than what Pope Francis calls for. Indeed, we feel that the Pope is the only international leader who has repeatedly stated that, in addition to acknowledging the responsibilities, peace – and all possible avenues for a ceasefire and negotiation – must always be given a chance.

But in fact – until now – negotiations have not even started. The doors are not closed but armoured. So what makes you believe that peace – understood as openness to negotiation – is even possible under these conditions? 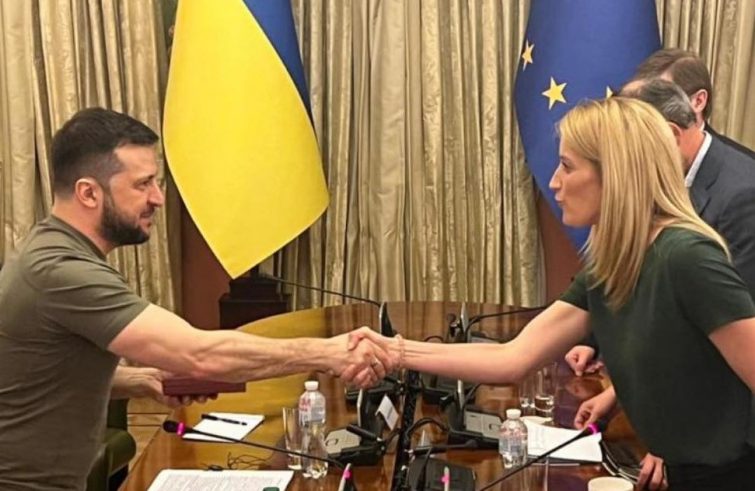 As long as we keep assuming that negotiations are a two-party process, no progress will be made. When conflicts are raging, if the warring parties are left alone, a mutually acceptable mediation will never be found. Whoever has the upper hand will reject any agreement and whoever is losing will refuse to acknowledge the backward steps they made. The only option is to establish multilateral talks that include, in this particular case, not only representatives of the Kyiv and Moscow governments, but all the relevant players that are necessary to reach a just peace. The underlying causes of the war in Ukraine – in addition to Putin’s and his regime’s responsibilities for sparking it off – date back a long way to the malaise of a world that no longer has a common security and stability. The underlying problem is the need for a new, more inclusive and open global order.

Which specific proposals would you like to bring to the negotiating table?

It’s not up to us to say and above all to make preemptive proposals because otherwise there will be no negotiations. What needs to be done, by Italy, by Europe, by the international community, is to exert pressure to stop the armed conflict and bring all the political actors involved around a multilateral and enlarged negotiating table. 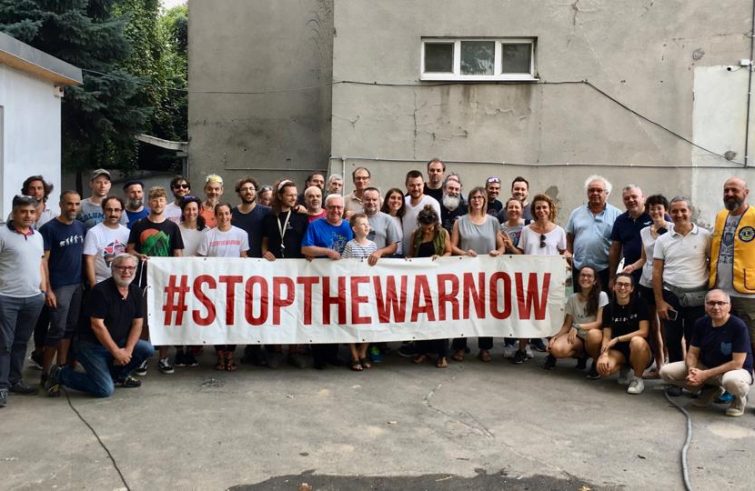 Which part of civil society will take to the streets?

A large part of civil society. Participants will include organisations that have sometimes seen things differently in recent months. One such example concerns sending arms to Ukraine. The civil society that will take to the streets has operated in different ways and on various fronts. Some have worked to support the Ukrainian civilian population and others to support and help Russian protesters and dissidents. Despite these differences in terms of approach and role, we are all coming together in large numbers to say that today it is essential to stop speaking of war and armed solutions and to start talking about peace instead. Peace is not about winning wars, but about finding a solution together. We are well aware that it is a difficult path, yet it is a path to which we have not hitherto devoted much effort.

Do you have any hope of being heard?

The symbol of peace comes from the from the biblical story of Noah who released the dove to find dry land after a flood. When it finally returns, a rainbow appears in the sky, symbolising a New Covenant between God and humankind. But Noah did not just send one dove. He sent several other doves first, and only after a while did one of them return. This is a lesson to us that, in asking for peace, we must be persevering. Hope is perseverance. It’s hard, it’s complicated, we don’t have a solution at hand. Nevertheless, we must strive to pave paths that have not been trodden so far. 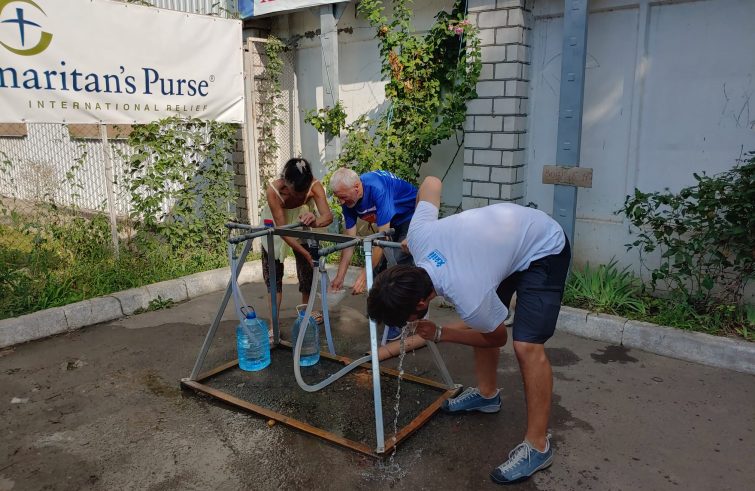 Peace is granting rights to all. Peace is not the absence of war. Nor is it merely armistice and truce. Stopping war is not enough for establishing peace. A society without warfare but one where few are rich and many are poor is not a society at peace. We must therefore do our best to remove inequalities, to help the weakest, to guarantee rights to all, to ensure access to democracy. That is why the peace gathering on November 5 will see a large crowd of people, because peace requires everyone’s support.