On his second day in the Arab country, the Holy Father addressed the Forum for Dialogue, the members of the Muslim Council of Elders and, lastly, the ecumenical meeting and prayer for peace. A theme Francis referred to on several occasions: "Serious negotiations" to stop the war in Ukraine

A hymn for peace, divided into three moments. This was the format of the second day of Pope Francis’ apostolic visit to Bahrain. The strong condemnation of arms trade and the appeal to put an end to armed conflicts was the common thread of his speeches: starting with the Forum for Dialogue, to the members of the Muslim Council of Elders, and finally at the ecumenical meeting. Special emphasis was placed on the war in Ukraine, which the Pope referred to in his opening address this morning. Upon his arrival at Al-Fida’ Square, at the Sakhir Royal Palace, the Pope was received by the King of Bahrain, Hamad bin Isa bin Salman Al Khalifa, and by the Grand Imam of Al-Azhar, Ahmad Al Tayyeb. Together they proceeded to the garden for the Tree of Peace ceremony. “While the majority of the world’s population is united in facing the same difficulties, suffering from grave food, ecological and pandemic crises, as well as an increasingly scandalous global injustice, a few potentates are caught up in a resolute struggle for partisan interests – Francis said – reviving obsolete rhetoric, redesigning spheres of influence and opposing blocs. We appear to be witnessing a dramatic and childlike scenario.”

“Bahrain Forum for Dialogue East and West for Human Coexistence”. In his address the Holy Father remarked: “Nowadays, we find ourselves overlooking two seas with very different waters: the calm, freshwater sea of a serene life together, and the salty sea of indifference, marred by clashes and swept by the winds of war, its destructive billows growing ever more tumultuous, threatening to overwhelm us all.” His words express the awareness that “East and West increasingly resemble two opposing seas.” “We, on the other hand, are here together because we all intend to set sail on the same waters, choosing the route of encounter rather than that of confrontation, the path of dialogue indicated by the title of this Forum.” The Pope’s concerns are clear: “in the garden of humanity, instead of cultivating our surroundings, we are playing instead with fire, missiles and bombs, weapons that bring sorrow and death, covering our common home with ashes and hatred.” Francis thus expressed the desire that “the divergences between East and West be settled for the good of all, without distracting attention from another divergence that is constantly and dramatically increasing: the gap between the North and the South of the world.”

Francis thus pointed out that “the emergence of conflicts should not cause us to lose sight of the less evident tragedies in our human family, such as the catastrophic inequality whereby the majority of people on our planet experience unprecedented injustice, the shameful scourge of hunger and the calamity of climate change.”

The Holy Father highlighted three “challenges” that have to do with prayer, education and action. Prayer because “the imbalances under which the modern world labours are linked with a more basic imbalance which is rooted in the heart of man”, Francis said quoting from Gaudium et Spes. Prayer is therefore essential “for purifying ourselves of selfishness, closed-mindedness, self-referentiality, falseness and injustice.” “Those who pray receive peace of heart and cannot fail to bear witness to this and to invite others.” The focus was thus on education. “Where opportunities for education are lacking, extremism increases and forms of fundamentalism take root. Yet if ignorance is the enemy of peace – Francis pointed out – education is the friend of development, provided that it is an education truly befitting men and women.” Finally, those who are religious “forcefully reject the blasphemy of war and the use of violence. And they consistently put this rejection into practice.” 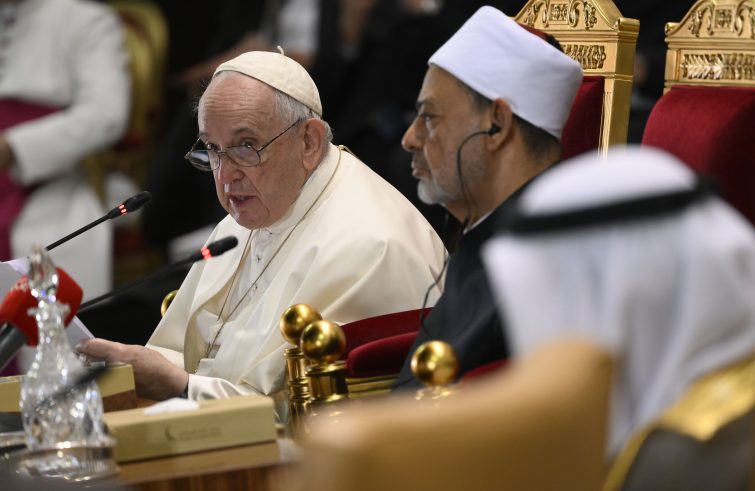 Peace in Ukraine. The Pope’s words are marked by the awareness that “force, arms and money will never paint a future of peace.” Thus the invitation is to promote “concrete initiatives to ensure that the journey of the great religions will be ever more effective and ongoing, a conscience of peace for our world.” Speaking off text, the Holy Father made a “heartfelt appeal for an end to the war in Ukraine and the start of serious negotiations for peace.”

God’s many creatures “do not yet find a sufficient place on the agenda of the powerful: the poor, the unborn, the elderly, the infirm, migrants…- the Pope said – If we who believe in the God of mercy, do not give a hearing to the poor and a voice to the voiceless, who will do it? Let us take their side.”

Address to the members of the Muslim Council of Elders. The second event was the meeting with members of the Muslims Council of Elders in the mosque of the Sakhir Royal Palace, following a private meeting with the Grand Imam of Al-Azhar, Ahmad Al-Tayyeb, its President. “We are called to promote peace with tools of peace, such as encounter, patient negotiations and dialogue, which is the oxygen of peaceful coexistence”, the Pontiff said. “Among your objectives is to spread a culture of peace based on justice. I want to tell you that this is indeed the path, or rather the only path, because peace ‘is the effect of righteousness.” In his speech, Pope Francis remarked that “peace cannot simply be proclaimed, it must be uprooted. And this is possible by eliminating the forms of inequality and discrimination that give rise to instability and hostility.” He thanked the Council of Elders “for your commitment, for the welcome you have offered me and for the world you have spoken.” 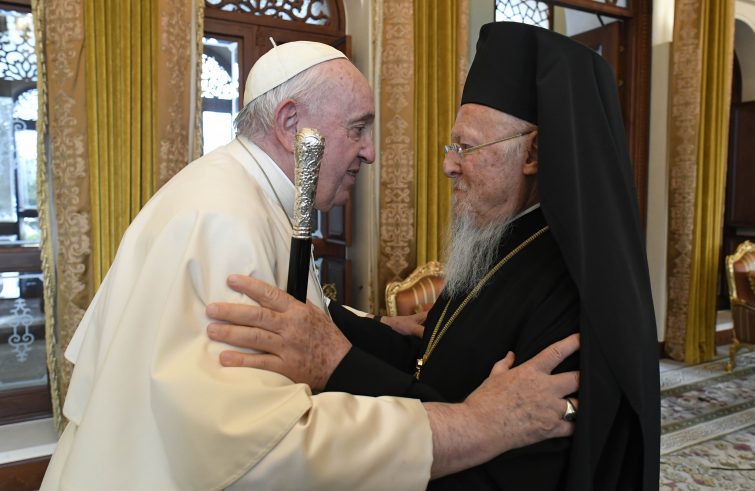 The role model indicated by the Pope is the Saint from Assisi. “I have come among you as a believer in God, as a brother and pilgrim of peace. I have come among you so that we can journey together in the spirit of Francis of Assisi.” Extending his gaze to current events, Francis explained that “social and international ills, economic and personal ills, as well as the dramatic environmental crisis that characterises our present times and on which we have reflected here today, ultimately derive from estrangement from God and from neighbour.”

“We must not allow ourselves to be tempted by other means and shortcuts – the Pope warned – unworthy of the Most high whose name of Peace is dishonoured by those who put their trust in power and nurture violence, war and the arms trade, the ‘commerce of death’ that, through ever increasing outlays, is turning our common home into one great arsenal.”

Ecumenical meeting and prayer for peace. The Pope was welcomed at the entrance to Our Lady of Arabia Cathedral for the ecumenical meeting and prayer for peace, by Msgr. Paul Hinder, Apostolic Administrator of the Apostolic Vicariate of Northern Arabia. Here, in the presence of representatives of other Christian denominations, the Holy Father expressed his awareness that “what unites us is much greater than what divides us and the more we proceed according to the Spirit, the more we will be inclined to desire and, with God’s help, re-establish full unity between us.” The invitation to bear witness: “Ours is in fact not something to be said in words, but a witness to be shown in deeds. Faith is not a privilege to be claimed, but a gift to be shared.” Finally, “the distinctive characteristic of Christianity, the essence of bearing witness”: to love everyone.