“I thank God who has allowed me to make this journey as a pilgrim of peace and hope”. Pope Francis said this during his general audience today, as he remembered the highlights of his 31st international apostolic journey and gave “thanks” for having been able to visit the African continent for the fourth time since the beginning of his Pontificate. “Christ is the hope of the world, and His Gospel is the most powerful leaven of brotherhood, freedom, justice and peace for all peoples”, Pope Francis said about the motto of his trip. “With my visit, in the footsteps of the holy evangelisers, I tried to bring this leaven to the people of Mozambique, Madagascar and Mauritius”. “I went to sow seeds of hope, peace and reconciliation in Mozambique, a land that has suffered so much in the recent past because of a long armed conflict and that was hit by two devastating cyclones last spring which caused very serious damage”, the Pope said, reflecting on the first leg of his journey. “The Church continues to accompany the peace process, which has taken a step forward on 1 August with a new Agreement between the parties”. “And here I would like to thank the Community of Sant’Egidio, who has worked so hard in this peace process”, he added off the cuff. “In this regard, I encouraged the authorities of the country, urging them to work together for the common good. And I encouraged the young people, who have gathered from different religious backgrounds, to build the country, overcoming resignation and anxiety, spreading social friendship and building on the traditions of the elderly. To the bishops, priests and consecrated persons I met in the Cathedral of the Immaculate Conception in Maputo, I proposed the way of Nazareth, the way of the generous ‘yes’ to God, in the grateful memory of her call and origins”. “A strong sign of this evangelical presence is the Hospital of Zimpeto, on the outskirts of the capital, which was built thanks to the commitment of the Community of Sant’Egidio. “In this hospital – he continued off the cuff -, I saw that the sick are the most important thing, and everyone works for the sick. Not everyone belongs to the same religious faith. The director is a Muslim woman specialised in AIDS, a good woman. And this hospital is done by the Community of Sant’Egidio, but all, all work together for the people united as brothers”. “My visit to Mozambique culminated with the Mass celebrated in the stadium, in the rain”. “But everyone was happy”, the Holy Father continued off the cuff: “The songs, the religious dances, so much happiness… The rain did not matter”. “There resounded the appeal of the Lord Jesus: ‘Love your enemies’, the seed of true revolution, that of love, which extinguishes violence and generates fraternity”, Pope Francis remarked. 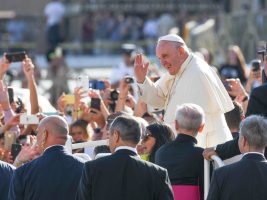 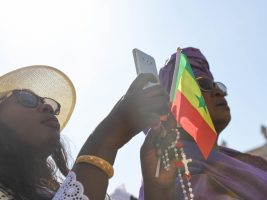 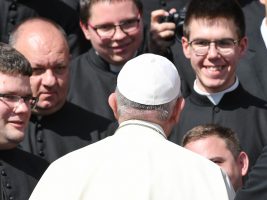 Russia: fund-raising campaign starting today to restore a church destroyed by a fire in St Petersburg

Pope Francis: audience, in Madagascar to combine “respect for the environment and social justice”

Pope Francis: audience, “I went to sow seeds of hope, peace and reconciliation in Mozambique”. “Thanks” to Sant’Egidio