The Church “is not a fortress, but a tent capable of making room for everyone so that everyone can enter and access it”. This is according to Pope Francis, who stressed in today’s general audience catechesis: “The Church is either ‘outgoing’ or it is not a Church; it is either on the move” and always expanding to accommodate everyone “or it is not a Church. It is a Church with open doors”. “When I see a little church, in this or that diocese, with closed doors, this is a bad sign”, Pope Francis continued off the cuff: “Churches must always leave their doors open, because that is the symbol of what a Church is – always open. The Church is called to be the open house of the Father, always. So that anyone who wants to follow a motion of the Spirit and approaches it seeking God does not meet with the coldness of a closed door”. “Now here come the problems”, the Pope remarked off the cuff: “The newness of the doors open to the pagans – since the Apostles would preach to the Jews, while also leaving the door open to the pagans – gives rise to a very controversial dispute. Some Jews uphold the need to become Jews first, that is, the need to be circumcised in order to be saved, and then baptised. They say: ‘If you are not circumcised after the custom of Moses, you cannot be saved’, that is to say, you cannot receive Baptism after. So the Jewish rite comes first and then Baptism – that was their stance”. “To settle the dispute, Paul and Barnabas consult the council of the Apostles and Elders in Jerusalem, and what is considered to be the first council in the history of the Church takes place. It is the same the council or assembly of Jerusalem referred to by Paul in his Letter to the Galatians”, Pope Francis recalled. 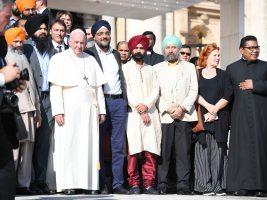 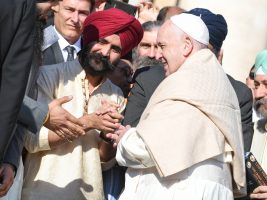 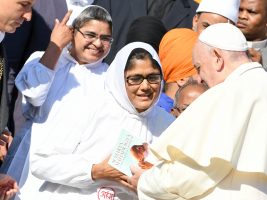