“Together with the Pope, we prayed for peace in Syria; we prayed together the Hail Mary”, said 30-year-old Dubicki Maciej from Caritas Poland in an interview with SIR news agency. The young man was received in audience in the Vatican by the Pope this morning, alongside three other workers from Caritas Poland and three Syrian exiles who had found refuge and work in Poland. “The Young Caritas Bus entered the Vatican from the Perugino gate”, the young man, extremely moved by Pope Francis’ warm welcome, recalled. “The Pontiff – he continued – spoke with the Syrians and inquired about their situation when they were in Damascus and Aleppo, and now in Poland; then he invited us to jump on the Popemobile, and we took some pictures together”. The bus of Caritas Poland left Warsaw on Friday, 27 April, with a view to asking for Pope Francis’ blessing in Rome before returning to Poland and continuing the journey across the country to raise awareness among the inhabitants of the need to help people in the Middle East. The initiative, sponsored by Caritas Poland to mark the 100th anniversary of Poland’s independence this year, has found a wide echo on all the national media, public and private alike. Thanks to the programme “From family to family”, under which Polish families provide support to families in Syria, about 10,000 Syrian households regularly receive assistance which helps them to survive despite the war. 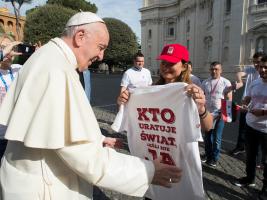 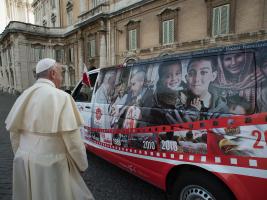 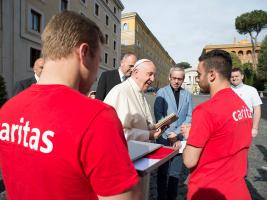 Pope Francis: Caritas Poland received in audience. Mr Dubicki, “we prayed together for peace in Syria”. Support for families

15:21
From the blog “Valerie and the Priest” Germany

EU: Juncker submitting the multiannual financial framework to the EU Parliament. “A budget for a protective, growing European Union”. Solidarity as a standard

Freedom of the press: Mogherini (EU), “information, the foundation of democracy, is threatened all over the world”

Pope Francis: audience, “pray for peace in the world, particularly in the Middle East”

Pope Francis: audience, “you are either with God or with the devil”. “The devil divides, God always unites”