The “two-state solution” and the “status” of Jerusalem were among the issues discussed during the audience Pope Francis granted to the President of the State of Palestine, Mahmoud Abbas, today. The president subsequently met with Mgr. Paul Richard Gallagher, Secretary for Relations with States. “During the cordial discussions – a statement from the Holy See Press Office announced -, the good relations between the Holy See and Palestine were noted, as were the positive role of Christians and the activity of the Church in Palestinian society, enshrined in the Global Agreement of 2015”. Attention then turned to the “path of reconciliation among the Palestinian people, as well as the efforts to reactivate the peace process between Israelis and Palestinians, and to reach a two-state solution, hoping for a renewed commitment on the part of the international community to meet the legitimate aspirations of both peoples”. Then “particular attention was reserved for the ‘status’ of Jerusalem, underlining the importance of recognizing and preserving its identity and the universal value of the holy City for the three Abrahamic religions”. Finally, “mention was made of the other conflicts afflicting the Middle East and the urgency of promoting paths of peace and dialogue, with the contribution of the religious communities, to combat every form of extremism and fundamentalism”. 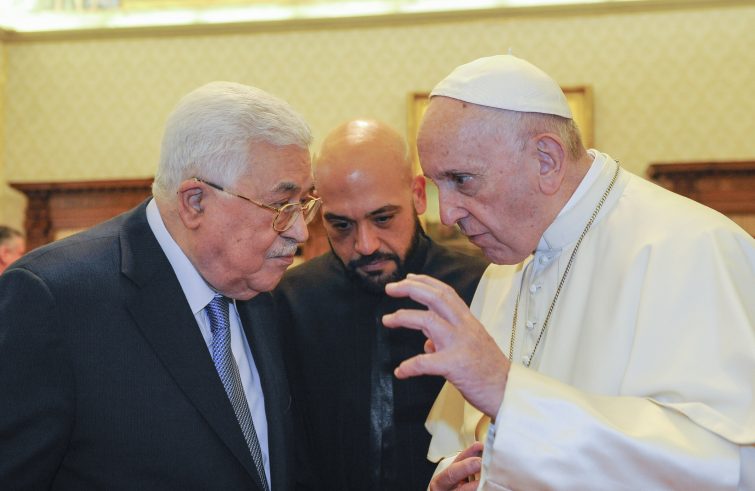 The pool of journalists present at the meeting reported that the private meeting between the Pope and the Palestinian president lasted for approximately 20 minutes, from 10.37 to 10.57. The Palestinian delegation was composed of 16 people, including the Minister for Foreign Affairs; the Advisor for Religious Affairs; the Diplomatic Advisor; the Ambassador to Italy; and the Ambassador to the Vatican. Abu Mazen presented the Pope with three gifts: an under glass oil painting, depicting Jerusalem’s Old City – “This painting represents the spirit of the Old City of Jerusalem”, the president told the Holy Father -; a book on the history of relations between the Vatican and the Holy Land; and a small handmade inlaid wooden box. The Pope gave to Mr Abbas a bronze medal depicting Saint Peter’s Basilica: “This is the 17th-century Basilica, with the square and the colonnade”, Pope Francis explained, who also presented the president with a copy of his Encyclical “Laudato si’” and of the message for the World Day of Peace. “I wanted to sign it with today’s date”, Pope Francis told Abu Mazen. “Let us pray for peace in this Christmas season”, he told Mr Abbas. “Thank you so much for your visit”, the Pope bid farewell to the president, speaking in Italian. “I am happy we had this meeting, we are counting on you”, the Palestinian president told the Pope.

Migration: Mgr. Hollerich (COMECE), support from the Catholic Church to the Global Compact. “Security and protection to migrants and hosting societies”

16:50
LETTER TO THE FAITHFUL Lithuania

Lithuania: Bishops’ Message for Advent, “resist that individualism which isolates us from others”

Council of Europe: report on European prisons to be published tomorrow

Brexit: deadlock in London, PM May on the brink. Headlines in the papers. The Sun: “UK needs new PM”

Pope Francis: Angelus, lighting of a candle for peace in “beloved Syria”