“Advent is a time for hope. At this time, I would like to make my own the hope for peace of the children of Syria, of beloved Syria, martyred by a war that has lasted for eight years now”. The Pope said this as he adhered to the initiative of Aid to the Church in Need (ACN) for peace in Syria. “I will now light a candle together with many children and many faithful across the world who will do the same today”, he said at the end of yesterday’s Angelus in St Peter’s Square which was attended by 20,000 people, according to the Vatican Gendarmerie. “May this and many other flames of hope dispel the darkness of war!”, he exclaimed. “Let us pray and help Christians to remain in Syria and the Middle East as witnesses of mercy, forgiveness, and reconciliation”. “May the flame of hope also reach all those who are suffering in these days from conflicts and tensions in various other parts of the world, near and far”, Pope Francis continued. “May the prayer of the Church help them to feel the closeness of the faithful God and touch every conscience for a sincere commitment to peace. And may God our Lord forgive those who make war, those who make weapons to destroy one another, and convert their hearts. Let us pray for peace in beloved Syria”. 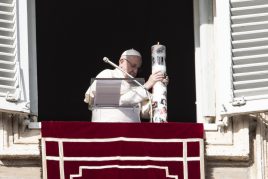 Migration: Mgr. Hollerich (COMECE), support from the Catholic Church to the Global Compact. “Security and protection to migrants and hosting societies”

16:50
LETTER TO THE FAITHFUL Lithuania

Lithuania: Bishops’ Message for Advent, “resist that individualism which isolates us from others”

Council of Europe: report on European prisons to be published tomorrow

Brexit: deadlock in London, PM May on the brink. Headlines in the papers. The Sun: “UK needs new PM”

Pope Francis: Angelus, lighting of a candle for peace in “beloved Syria”