In the Christian stronghold of Maaloula people still speak Aramaic – the language of Jesus Christ. The village was captured by Al Nusra terrorists in September 2013. They profaned and plundered churches, ancient sanctuaries and set fire to houses. Most of its inhabitants were forced to flee. Today, after 5 years, the villagers are trying to start anew. The accounts of the Melkite priest and of the Orthodox Archimandrite 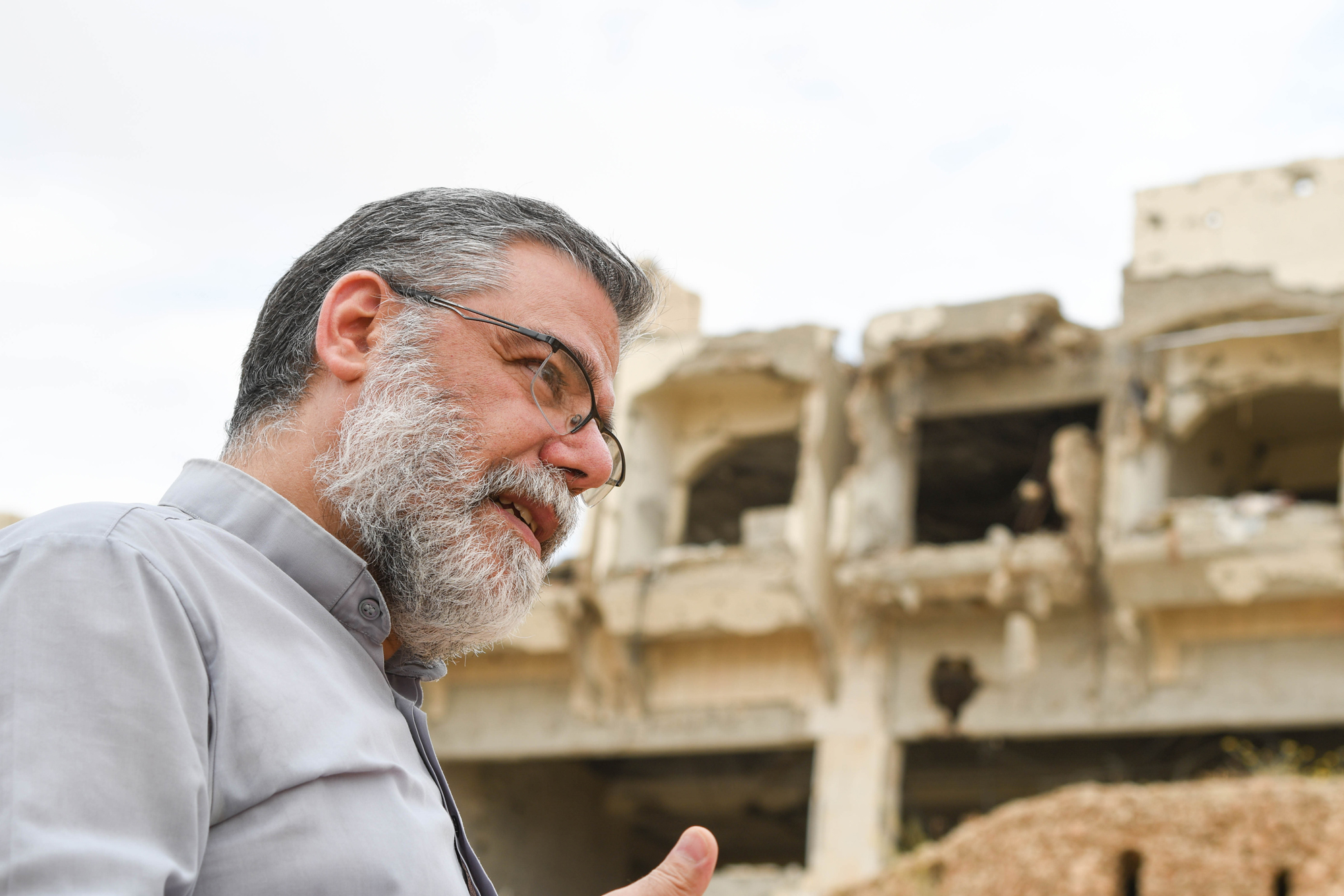 A twin town, with its red hued rocks, those of the Qalamun Mountains, camouflaged amidst its colours. The landscape unfolds slowly on the uphill road at 1500 Mt altitude. Holes and craters oblige us to proceed in a sort of gymkhana raising clouds of dust at every driving manoeuvre. The town is located 60 km from Damascus and not far from the Lebanese border. Maaloula is a Christian stronghold in Syria where Aramaic, the language of Jesus Christ, is still spoken today. It was proclaimed a UNESCO World Heritage Sites, inhabited by a few thousand Christians who watch over its churches and monasteries, like the Greek Orthodox church devoted to St Thecla, a disciple of St. Paul, and the 6th century Mar Sarkis Melkite church of Saints Sergius and Bacchus. A narrow pass created throughout the centuries by the wind and the rain connects the two shrines. According to the legend this is where Saint Thecla was sheltered from her persecutors. Before the war Maaloula was a pilgrimage destination for many pilgrims arriving from all over the world. Every year they would travel to these mountains to pray in one of the birthplaces of Syrian Christianity. 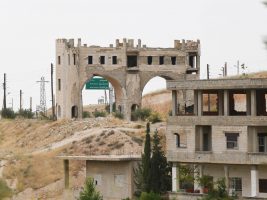 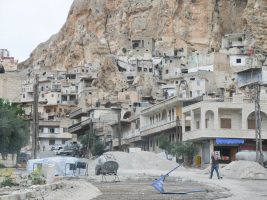 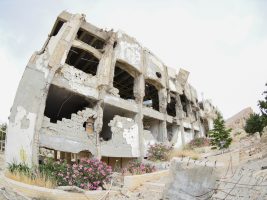 Open wounds. Today Maaloula is a village that still bears the scars of the war, deep wounds inflicted on the local community, disfigured like its churches, its icons, its paintings, its statues. This was where a nine-month battle was fought, from September 2013 to May 2014.

Father Toufic Eid, Melkite priest of St.George’s church, shared his recollections of those tragic days from the height of the mount overlooking the village, adjacent to the monastery of Saints Sergius and Bacchus, where he recites Our Father prayer in Aramaic:

“Maaloula reflected Syrian coexistence – the priest recalls indicating the village and its ruins -. They wanted to destroy it to send out a strong signal. Militarily and strategically Maaloula was of no particular importance. They attacked a symbol of Christianity, a place whose inhabitants still speak Aramaic, the language of Jesus.”

When Maaloula fell into jihadists’s hands the news hit the headlines worldwide. The militiamen of Al-Qaeda linked to the Jabhat al Nusra front (now Hay’at Tahrir al-Sham, ed.’s note), conquered the town and used it as a military base. At the beginning Free Syrian Army opposition members battled on their side, having been credited as defenders of the local Christian population. “They controlled the town from above – the priest said – the terrorists had captured the Safir Hotel and used it as their headquarters. They went so far as to destroy a statue of the Holy Virgin, Lady of Peace, erected by local Christians to protect their village.” The hotel no longer exists, all that remains is a rusting carousel damaged by the bombs. 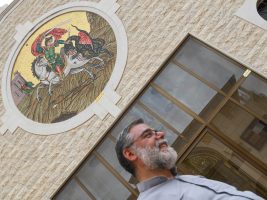 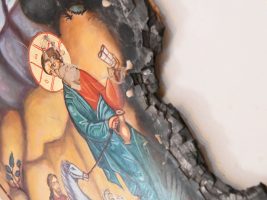 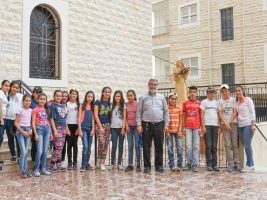 It was the beginning of devastation. “Since then – added the parish priest – everything was devastated: houses, churches, along with desecrations, fires, pillaging, summary executions. The nuns of St. Thecla were held hostage for about four months. The same fate was suffered by six young Christians, five of whom were later found dead, while we have no more news of the sixth. They were not the only martyrs of Maaloula.” The priest’s recollections don’t stop there as he recalls “the terrorists’ fury lashed against the sacred images.”

They damaged all the sacred icons, they were afraid of looking at them.

They damaged the depictions of the saints, the image of Christ, they destroyed the statues. They wrecked the altars, the iconostasis, the baptismal font.” “But what most impressed me was the burning of the baptism records. It’s as if they wanted to erase our faith. But they failed, for we are still here”, Father Toufic proudly affirmed. Not far away lie the remains of a statue of St. George situated in the courtyard of the homonymous church where a statue of St. Rita da Cascia, “restored by one of our youths who sadly died in the war,” was recently reinstalled. A group of children arrive despite the unexpected rainfall and start playing in the courtyard. The priest looks at them with a smile: “they are a sign of life we must preserve. They are the future of Maaloula.” His laborious efforts to recover from the devastation of the war are also motivated by their presence. 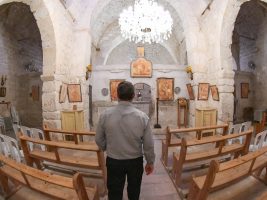 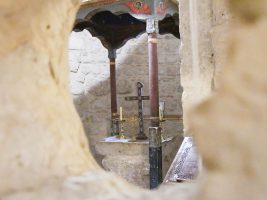 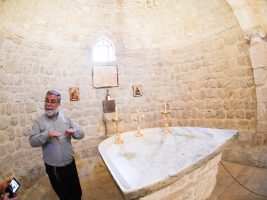 Today, five years after its reconquest by the Syrian army, Maaloula is an almost empty town: “its inhabitants have fled and have not yet returned. The houses must rapidly be rebuilt.

Today the Christian community counts some 800 people – the priest said –, a very small number compared to over 3000 faithful a few years ago.. We have restored the church and 190 houses were rebuilt thanks to the Italian Catholic Church. 130 buildings are yet to be reconstructed, amounting to a total expenditure of one million dollars. We are making a new start thanks to the help of so many benefactors around the world. 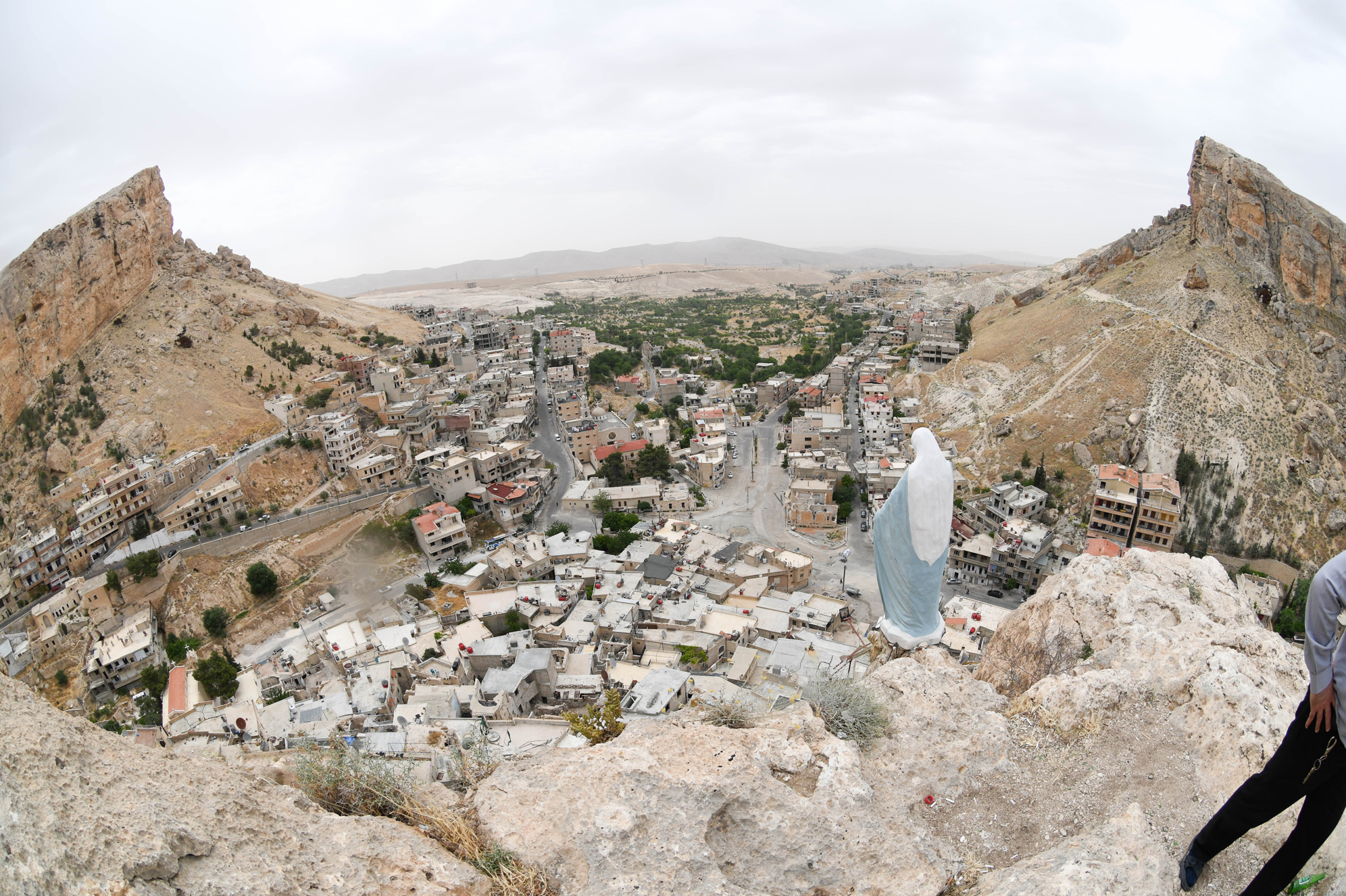 Our priority is to give a home to those left without their own and enable them to move forward in their lives. This year I celebrated only one marriage, none in 2018. Baptisms can be counted on the fingers of one hand. Life here is a big challenge, hope is a challenge. The rebuilding of houses is encouraging the resumption of work.” One such example “is a small restaurant that has recently reopened.” It’s good viaticum for some pilgrims “who are slowly returning to these now pacified areas. Last March – Father Toufic said – six visitors from Western Countries arrived. They were welcomed by some families who offered them a bed and food for a few dollars. It had also happened in the past, but the outbreak of the war prevented the continuation of this reception service. We hope to resume it.”

The same hope is shared by Archimandrite Matta Reza, prior of St Thecla Orthodox Christian convent. The months during which they were held hostage of the Jihadis did not erase the smile from the 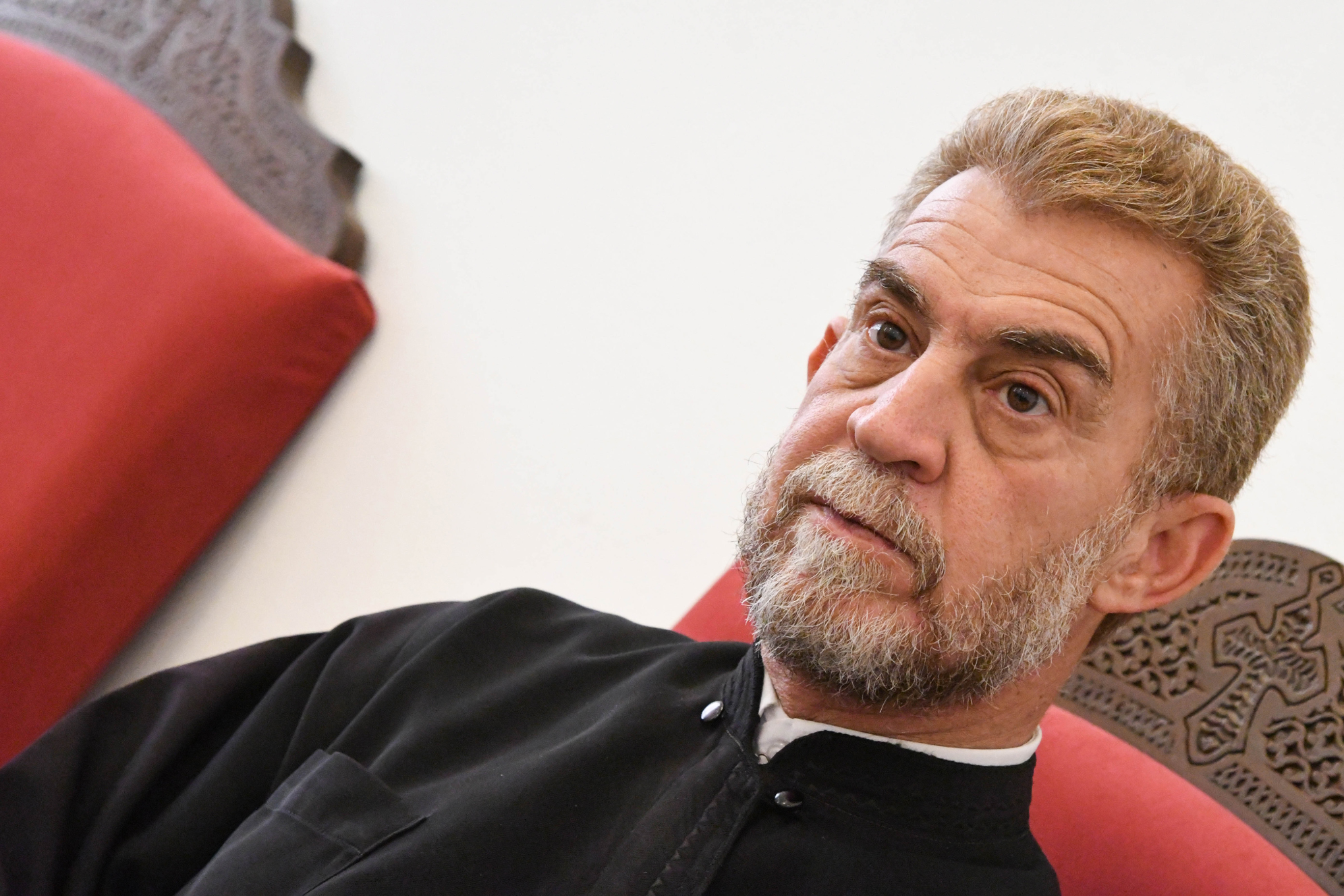 faces of these nuns, who continue their mission in the monastery “cleaned of the bloodstains from the battle, restored and finally accessible.” “They left the past behind to cultivate peace in their hearts and help people overcome. They look ahead in spite of everything”, said the priest, quoting from the Gospel of Luke, “No man, having put his hand to the plough, and looking back, is fit for the kingdom of God.” In Maaloula there is no time to look back. “Despite all the devastation

the Holy Light showed us the way. The gates of hell remained closed.

We encourage the families, the living stones of this land, to remain steadfast in the faith” reiterated Archimandrite Reza. He takes a pause before saying what you wouldn’t expect:

“there are good people even among the Jihadi fighters. Goodness is everywhere.” 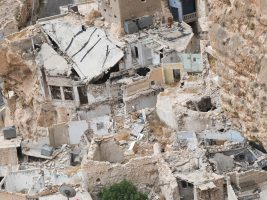 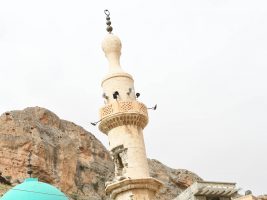 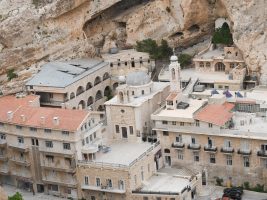 “Our Christians fleeing Maaloula were saved by Muslims living in bordering towns. Rebuilding is possible, we have already begun. We are sons and daughters of life and whoever believes in life can make it. Every good word, every gesture of peace contains a germ of God.” It’s almost sunset when, as we leave Maaloula headed towards Hams, we feel the need to extend a last gaze to the highest peak, to the mount where the Statue of Mary , Lady of peace, was returned to its place. It was brought back by Muslims and Christians together. Maaloula is now in good hands.