In two years she covered a distance of approximately 2000 km on foot to meet and dialogue with women in Morocco and Tunisia and raise awareness on women’s rights. Loubna Bensalah, 26, Moroccan activist, is young, beautiful and determined. She is attending meetings in northern Italy promoted by CIPMO (Italian Centre for the Middle East). Covering long distances on foot is part of the project “I Walk With Her”, which has a strong symbolical value. Her communication activity on social networks is equally powerful and effective, to the extent that the Mohamed V University in Rabat awarded her a professorship in Communication. This year Loubna’s marches have become a public initiative titled “Kayna – conquering public spaces through the march for women”, namely to walking together with women from Moroccan villages to enjoy rights and access public spaces (work, school, politics) on a par with men. Loubna recently brought her experience to Paris at UNESCO Conference  for the launch of the project for “Prevention of Violent Extremism through Youth Empowerment in Jordan, Libya, Morocco, Tunisia.” 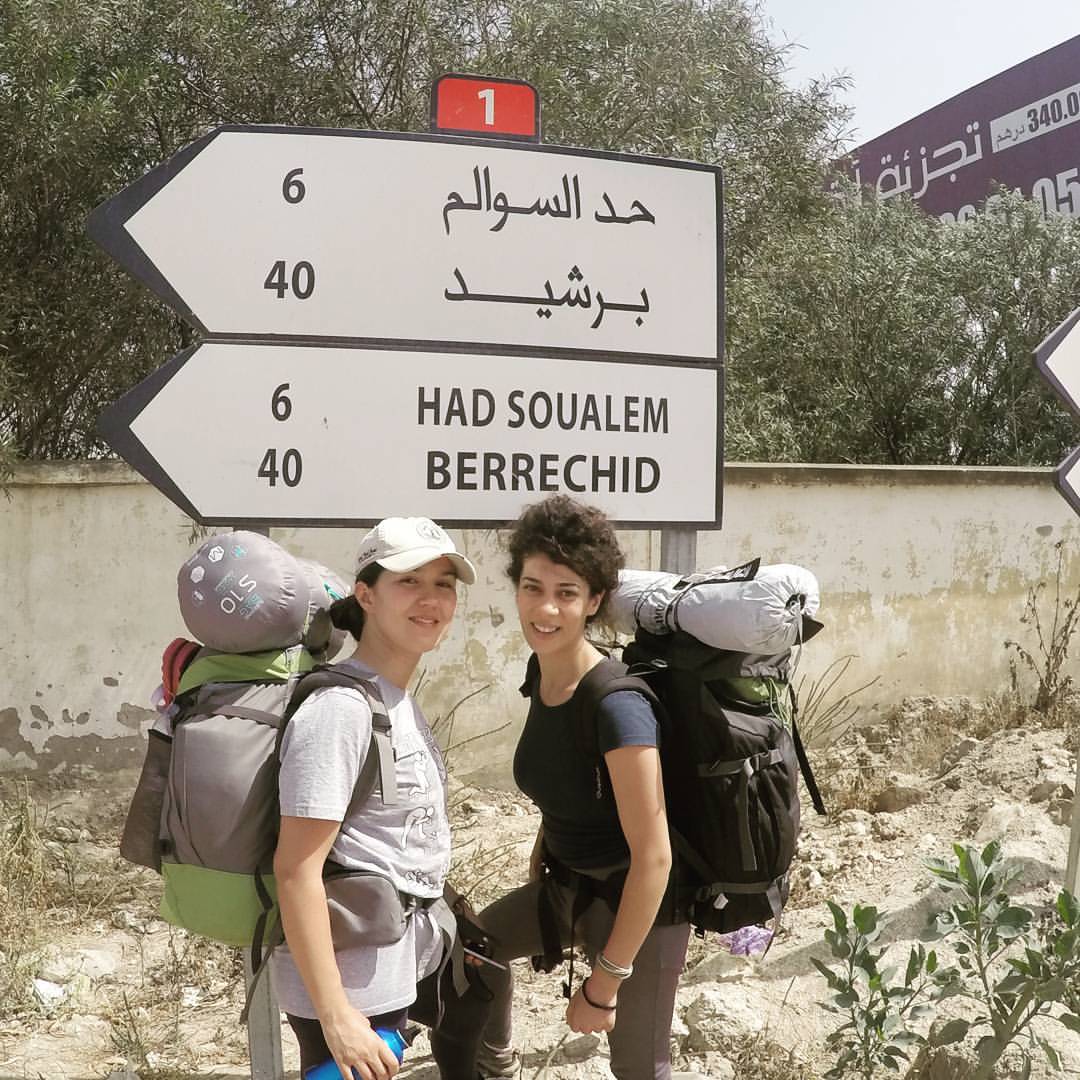 What have you discovered during your journey on foot , in your meetings with so many women from your Country? Are there many rights yet to be conquered?
I am a Moroccan woman who has accessed higher education, employment; I was raised in a free family that allowed me to travel abroad and inside Morocco. I wasn’t fully aware of the sorrowful condition of women in my Country at the time. As regards human rights, during my travels I realized that

women are not conditioned by the law but by the dominant mentality.

Laws don’t prevent women from wearing a miniskirt, working, voting, going to school or smoking in public. Mentalities are stronger than laws in Morocco. This happens both in small towns and in large urban centres. Although in cities like Marrakech or Rabat you can see a greater degree of female emancipation, the situation differs from one neighbourhood – or district – to the next. In order to be free women must live in beautiful neighbourhoods, go to cafes. In other words,

you need money to be a free woman.

Is the situation different in Tunisia?
The situation in Tunisia is slightly different. After the revolution women became more aware of the need to enjoy their rights. In Morocco, in the 1940s,  women started fighting every day to see their basic rights recognized. In Tunisia President Habib Bourguiba granted full rights to women in 1956. There was no need for social society to battle for rights. When successive governments came to power the situation reached a critical point, and the Feminist movement in Tunisia battled to defend their acquired rights. The laws have been enforced but in my meetings with Tunisian women I realized that

many of them don’t enjoy their freedoms and don’t live their rights in full because they are influenced by the dominant mentality.

Is it a patriarchal mentality?
It is. According to this mentality men are better than women, women need to be protected and their reputation must be preserved until they get married and have children. The role model is a woman who rarely goes out of the house, who takes care of household chores and of her children, otherwise she is despised.

But power is in men’s hands.

Italy experienced the feminist revolution in the 1960s-70s. Which direction will the emancipation of women in the Maghreb follow?
There can be only one direction: equal rights to men and women. We must stop addressing men or women as separate entities and start thinking in terms of citizens. The change in mentality is bound to be different from that of Western societies that has completed a process, battled and obtained what was demanded, and that is still fighting to reaffirm a set of rights.

Now it’s our turn as Middle Eastern women to follow our course based on our feelings and perceptions.

Our cultures are completely different, with different religions. We don’t necessarily need to follow a European model. We need to follow our own models and make our small steps, little by little. Our identity is at stake.

Does religion exert strong social pressure?
In this case religion is used to prevent women from doing something, but there are no arguments to motivate it. Religion has nothing to do with the advancement of the people.

We are subjected to the pressure of traditions, customs, to the fear of what people could say. Changes must be small and take place a little at a time.

That’s the situation in Morocco. It’s not like in Saudi Arabia where women are forbidden to drive a car. North Africa is much different.

Thus the invitation is to be precise and not to speak of Middle-Eastern or Arab women as a whole… In fact it would be a big mistake. Even in Morocco it would be imprecise to speak of Moroccan women per se since the country is marked by great diversity, by different mentalities. There is no such thing as a single mode of thought. It’s already difficult amongst ourselves, thus to generalize in terms of “Middle Eastern women” is completely wrong.

Morocco is among the Countries at the forefront of human rights: could it pave the way for the rest the Arab world?
Indeed, Maghreb women share the same religion and the same language, and they can open a door to the emancipation of women in the Middle East and in Northern Africa. Tunisia is a leading country in the respect of women’s rights, Lebanon is a role model, given the high degree of emancipation. It is necessary to change the dominant mentality through programs that illustrate the changes needed and to not present them as fait accompli. Let’s take as an example what happened recently in Tunisia: a draft bill submitted to Parliament past May proposed to grant women and men equal inheritance rights. Civil society battled to pass the bill, but the population at large need to know what it consists in. When I travelled by foot across Tunisia I asked women if they agreed with this Law: 89 of them said they were against. So while we need to acknowledge UN recommendations and we welcome the projects under way, it is necessary that the people agree with what they are being proposed.

On December 10 recurs the 70th anniversary of the Human Rights Declaration. What are the auspices for Maghreb women?
We hope they will be true to themselves, to stop viewing themselves just as women and take action as human beings.

Future projects?
I will continue walking across Morocco and Tunisia to promote women’s rights. I am now working on a public initiative titled “Kaina – conquering the public arena through the march for women.” To empower women in every village, make them go out of their homes and work their way in the public domain, in the areas of education, labour, etc.  Every month I visit a village with one of my teams and we march together with some twenty women. Approximately two-hundred people are involved. It’s a way to reconcile women with the public realm, it’s the transformation of male public domain into a place that brings together all citizens with equal dignity and respect.

What is your message to Italy?
I want Italy to know that we have woken up too: we have become emancipated and we are moving forward. We look forward to a universal march that brings together women worldwide. There is need for female solidarity and commitment. I have come to Italy to say to women: you have gained access to all your rights, don’t knuckle under!

Remember how your grandmothers used to live. We need to revive that struggle, for if we stop we risk backtracking.