The official announcement is due today, December 6, but the news feared by the Palestinians and the international community is already of public knowledge: President Donald Trump will move the US embassy from Tel Aviv to Jerusalem. The reaction of Palestinians, the first comments of the Christian community and the concerns of the international community. The appeal of Pope Francis at the end of the general audience

(from Tel Aviv) The official announcement is due today, December 6, but the news feared by the Palestinians and by the international community is already of public knowledge: President Donald Trump will move the US embassy from Tel Aviv to Jerusalem. The six-month waiver to delay the embassy move from Tel Aviv will serve little purpose.

As known, the status of Jerusalem is one of a contented city, and its relevance for the three great monotheistic religions, Christianity, Judaism and Islam, makes the resolution of the Israeli-Palestinian conflict even more complicated. The Eastern part, that includes the Wailing Wall and the Esplanade of the Mosques, where the Dome of the Rock and the Al Aqsa Mosque are located, holy sites for the Muslims, was conquered by Israel during the Six Day War, in June 1967. Since then, most UN member countries don’t recognize Israel’s annexation of East Jerusalem, nor do they recognize Jerusalem as capital of Israel. For that reason most foreign embassies in Israel are located in Tel Aviv.

According to Wafa Palestinian news agency, President Abu Mazen (Mahmoud Abbas) was directly informed by Trump. Reportedly, the former warned his US colleague of the “dangerous consequences of his decision on the peace, security and stability process in the region and in the world.” Abu Mazen then had a phone conversation with Pope Francis – as confirmed by the spokesperson of the Holy See Greg Burke, who pointed out that the phone call was “an initiative of Mahmoud Abbas” – and with Russian President Vladimir Putin, informing him of the “threats to the city of Jerusalem.” 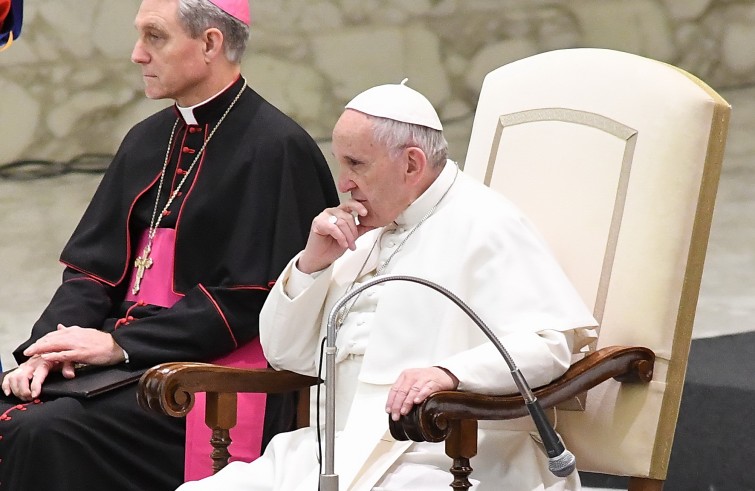 Today, at the end of the general audience, the Holy Father made an appeal for Jerusalem:

“I am deeply concerned about the recent developments. My heartfelt appeal is that that everyone respects the status quo of the city, in compliance with the relevant U.N. resolutions. Jerusalem is a unique and sacred place for Christians, Jews and Muslims who worship the Holy Sites of their respective religions therein. It has a special vocation for peace. I pray to the Lord that this identity be preserved and strengthened for the benefit of the Holy Land, the Middle East and the entire world, and that wisdom and prudence prevail to avoid adding new elements of tension in a global scenario already convulsed and marked by so many cruel conflicts.”

The news of the move was reported by Israeli media outlets with different emphases. But there is great anticipation over Trump’s declaration. The website of Haaretz daily newspaper published several articles on the issue with significant headlines: “President Trump, don’t do us any favours on Jerusalem; The Biggest Loser in Trump’s High-stakes Jerusalem Embassy Decision: Netanyahu. It was a trap all along, and Netanyahu could not help but fall in; In the end, the blood that will surely be spilled will not be on Trump’s hands. It will be on Netanyahu’s”; “Trump Is Bringing Bloodshed, Not Peace, to Jerusalem.” “Israeli right hails ‘historic’ Trump decision, left predicts regional chaos”, read an online report of the Jerusalem Post posted yesterday evening.

Palestinian reactions. The US recognition of Jerusalem as capital of Israel was condemned by all Palestinian factions that announced

“three days of rage” in protest:

“We call on all our people in Israel and around the world to gather in city centres and Israeli embassies and consulates, with the aim of bringing about general popular anger.” Hamas threatened to carry out a new intifada. The decision “would constitute a US attack against the city.” And while Israeli security forces are preparing to face the “possibly violent” Palestinian revolts, the US Consulate warned US citizens present in Jerusalem to avoid travelling to the Holy City and to the West Bank in view of the protests.

Reaction of the Christian community.  Archbishop Teodosio (Hanna Atallah) from the Greek-Orthodox Patriarchate of Jerusalem, in a radio interview with “Voice of Palestine” radio station, declared that Trump’s decision “is

that will not stand idle. All those who love Palestine and Jerusalem, those who intend to defend its Muslim and Christian holy sites, have to close ranks and be united in the same entrenchment.” For Reverend Mitri Raheb, Chair of the Dar al-Khalima Christian University in Bethlehem

Trump’s turnaround “is the kiss of death to the so-called peace process. It ushers in a new chapter with an unpredictable outcomes – he told SIR -. Dangerous developments could involve the entire region.”

The international community. Concerns were voiced by the international community. “The European Union supports the resumption of a meaningful peace process towards a two-state solution”, stated the EU High Representative/Vice-President Federica Mogherini at the end of the bilateral meeting with US Secretary of State Rex Tillerson. “We believe that any action that would undermine these efforts must absolutely be avoided – Mogherini added-. way must be found, through negotiations, to resolve the status of Jerusalem as the future capital of both states, so that the aspiration of both parties can be fulfilled.” In a release French President Emmanuel Macron pointed out that the question of “Jerusalem’s status will have to be dealt with in the framework of the peace negotiations between Israelis and Palestinians.” His position is shared also by Italy’s Foreign ministry: “There is no going back from the two-State solution.” Turkish president Recep Tayyip Erdogan warned the head of the White House that recognizing

Jerusalem as Israel’s capital is “a red line for Muslims”

And that Turkey could go as far as breaking off diplomatic ties with Israel. For Saudi Arabia the US decision is a move that would “irritate the feelings of Muslims throughout the world. The rights of Palestinians over Jerusalem cannot be changed.” The Secretary General of the Arab League Ahmed Aboul Gheit, said the US administration “should not take any measures that would alter Jerusalem’s legal and political status,” stressing the “risk of such a step for the stability in the region.”