"Share the journey" is the name of the two-year Campaign promoted by Caritas Internationalis across 160 world countries to build relationships and promote the “culture of the encounter” between migrants, refugees and local communities. Pope Francis officially launched the initiative in Saint Peter’s Square

With open arms to share the journey of migrants and refugees; to listen to their stories and understand the reasons that force them to leave. It’s the gesture and emblem of the Campaign “Share the journey” promoted by the Caritas network, launched September 27 by Pope Francis during the general audience. Over 20 000 thousand people gathered in Saint Peter’s Square, including one thousand members of diocesan Caritas in Italy and many refugees hosted in ecclesial structures.

The two-year initiative will be carried out in 160 world Countries in cooperation with the ecumenical network Act Alliance and with the support of UN bodies such as FAO, IOM, UNHCR, and WFP. It will be circulated on social networks – with pictures of open arms – at local, national and global level. The Campaign envisages meetings in schools, parishes and local communities to listen to the life stories of people who were forced to leave their countries. It’s a way to strengthen relationships and promote the “culture of the encounter” between migrants, refugees and local communities. 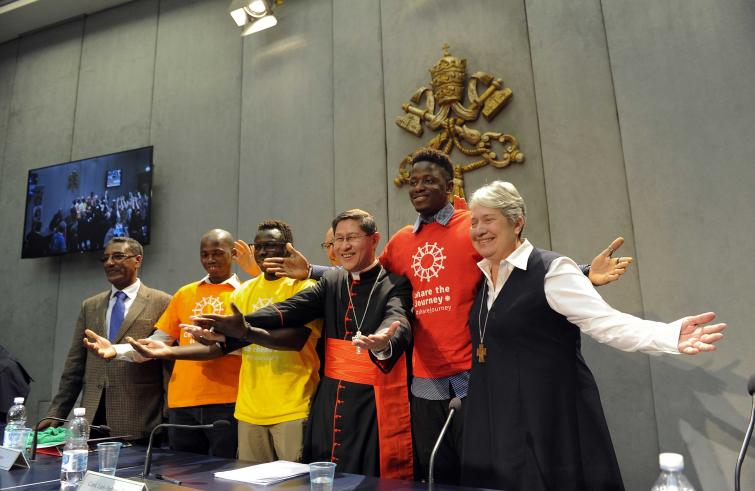 “The hope is to share the journey, because the journey is done together: by those who arrive and by us, as we go towards them to understand them”, Pope Francis said in impromptu remarks. “The journey cannot be done without hope!”, Francis said, since hope “drives the hearts of those who leave their homes, their lands, in some cases their relatives and family, to seek a better life, a more dignified life for themselves and for their dear ones.” “When our arms are wide open – he added referring to the logo of the Campaign – we are ready for a sincere embrace, a loving, caring embrace. And our embrace should mimic this beautiful colonnade that encircles St. Peter’s Square, which represents mother Church who embraces everyone by sharing in our common journey”.

“Don’t close your doors to migrants.” “I wish to say to politicians driven by the yearning to pursue the common good: don’t close your doors to migrant persons if you want your societies to be enriched by their presence”, said Cardinal Luis Antonio Tagle, archbishop of Manila, President of Caritas Internationalis, during the presentation of the Campaign at the Vatican’s press office. “Perhaps not everyone is open to meet a migrant or a refugee in person – he remarked -. That’s the reason why we want people to understand the reasons that force them to migrate. We should beware of stereotyping, because what is thought to be true not always corresponds to the truth.” 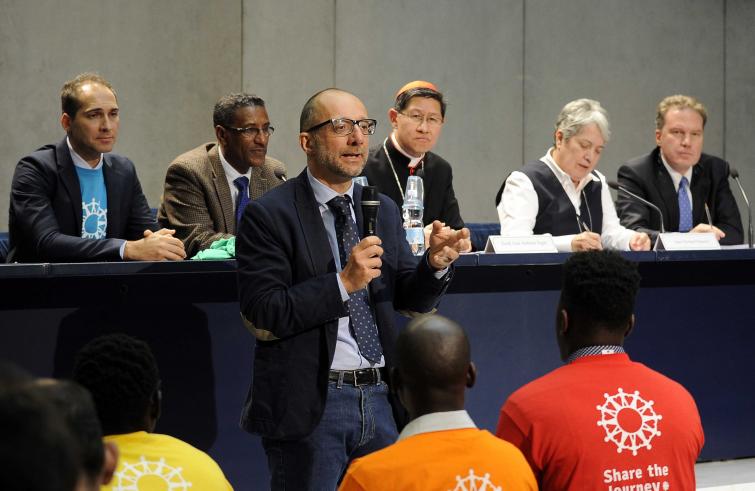 “A step backwards” on the jus soli. Speaking just before the presentation, Oliviero Forti, head of the migration office of Caritas Italy, commented on the adjournment of the Act on the application of jus soli, which “has been largely manipulated for years: Italy is mature enough to take a step of civilization, but today we are suffocated by interests of a political nature” that have brought us “a step backwards.” “To date nobody has been able to highlight the crucial importance of this issue for the Country – he said -. The bill was completed, but the courage to finalize its implementation and adoption is lacking.” By the end of  November, in the framework of the humanitarian corridors financed by the Italian Bishops’ Conference (CEI), Caritas Italy, with the support of the Sant’ Egidio Community, will bring to Italy the first groups of refugees from north Ethiopia. Most of them are Eritreans from the Tigrai region.