At the end of today’s audience Pope Francis condemned in clear terms yesterday’s chemical attack on Idlib for which the regime and the rebels blame each other. The Apostolic Nuncio in Damascus, Cardinal Mario Zenari, told SIR: “Enough is enough. The international community has the duty to intervene. It has the means to identify the culprits and learn the true facts. Those means have to be put into place to stop the violence while culprits ought to be identified and be held accountable for their actions”

“We watch horrified as the latest events in Syria unfold. “I completely deplore the unacceptable massacre that took place in Idlib province yesterday, where dozens of defenceless people, including many children, were killed. I pray for the victims and their families, and I appeal he consciences of those who have political responsibilities, on a local and international level, to halt this tragedy and bring relief to the population that has been sorely tried by war for far too long. In addition, I encourage the efforts of those who, despite insecurity and distress, strive to get help to the inhabitants of that region .” With these words Pope Francis condemned the chemical attack against Khan Sheikhun, a city in the north-western province of Idlib, under the control of the rebels, which, according to the latest reports, left at least 72 people dead, including 20 children, and hundreds wounded. As usual, the buck is passed from one to the other. London Washington and Brussels accuse Damascus’ regime, which denies all responsibility and accepts Russia’s support, according to which the target was a chemical munitions depot of the rebels.

“There are no words… before such deplorable actions – Cardinal Mario Zenari, Apostolic Nuncio in Damascus, told SIR – which sadly occur from time to time. It isn’t the first time that people are hit by toxic gases. Events of this magnitude have occurred at least seven or eight times already. It’s time to say that enough is enough. The international community must intervene.”

Your Eminence, how is it possible that a crisis such as the one in Syria, addressed by the greatest world powers, cannot reach a diplomatic solution negotiated with the warring factions?  I lived this crisis from the very first day it broke out. The conflict escalated and grew increasingly complex with the passing of time. It’s also hard to understand.

At the beginning it seemed a civil war, but more than that it’s a proxy war fomented by REGIONAL interests (the nuncio emphasized this term, Ed.’s note) … and disagreements, that extended to involve the international realm. A political solution? In my statements I repeatedly expressed my hope that 2017 would be a decisive year marking a turning point. A solution is hard to conceive. But I do hope a solution will be found in the course of 2017, or even in the coming weeks.

We all hope and pray that there be at least a change of course. The direction followed to date spiralled downward, reaching the depths of hell.

An uphill trend is urgently needed, but sadly, events such as those occurred yesterday don’t help us envision a substantial change of course.

In the meeting the humanitarian situation in Syria, the first of the kind in the framework of the International Conference for Support to Syria, organized in Brussels by the EU, the U.N., Germany, Kuwait, Norway, Qatar and United Kingdom, the European Commissioner for Humanitarian Aid Christos Stytlianide, reiterated that the EU “will continue providing humanitarian support for as long as it is necessary.” Nonetheless diplomatic dialogue it at a standstill… The key to a solution – also to the humanitarian crisis – is political. Before reaching the stage of attaining a political key the first step is a cessation of all armed conflicts, at least a ceasefire. As I speak I hear the deafening sound of the fighter-bombers and mortar shells that also fall here in Damascus: 24 mortar bombs were dropped two days ago. Yesterday I was supposed to chair a meeting, but I couldn’t go because mortar shells were being launched all around the place where I was staying. Although I live in Damascus, which is not under the bombs like other areas, I hear the sound of the fighter-bombers and of the mortar shells.

The first step is a ceasefire in order to focus on the political solution. It will take a long time, but at least the violence needs to stop. It would help in the distribution of humanitarian aids throughout the Country. 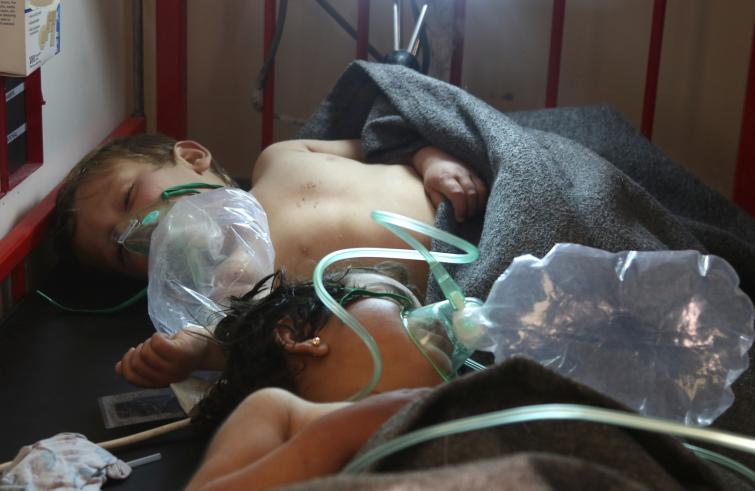 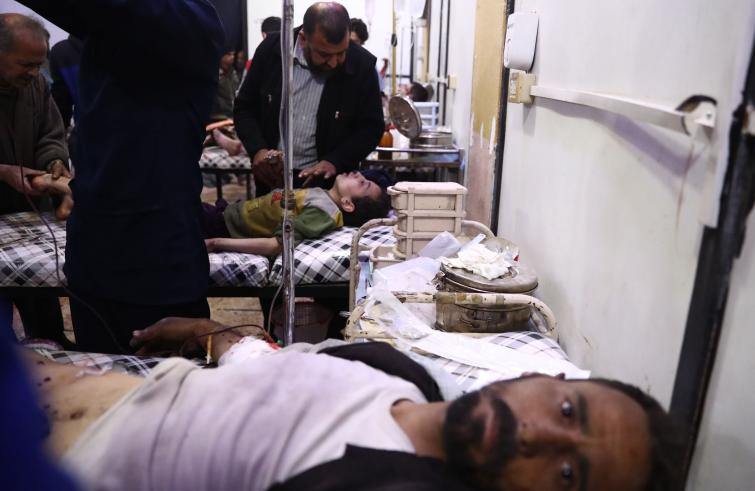 If the responsibilities of war crimes such as the one perpetrated yesterday in Idlib were ascertained, would it facilitate or complicate a diplomatic solution to the Syrian crisis?

The international community has the means to establish who is responsible and to learn the true facts.

Those means need to be adopted to stop the ongoing violence. The culprits must be identified and be held accountable.

Such events inflict a blow even on the hopes of the strongest hearts. How will Easter be celebrated by Christians in Syria? It will be the seventh Easter, and Easter is preceded by the Passion Week. In Syria there have been seven years of Passion. But we must always cultivate hope, and our Christians, from what I see here, fill the Churches at every celebration. It will be the same also during Easter.

Pope Francis will return to the Middle East at the end of the month, in that strip of land that is Egypt. Can this visit have positive effects also on the Syrian crisis? Indeed, the Pope’s visit to the Middle East will have a positive impact. The continuation of interreligious dialogue will be a great contribution. If the three great monotheistic religions work together they will benefit peace, thereby bringing positive effects on these Countries. Certainly this will occur with the visit to the Christian and Muslim communities. The dialogue between faiths is the key to reconciliation and peace.