The only Holy Door of Jordan is located in Anjara, a small town near the border with Syria. It will remain open even after the end of the Jubilee, celebrated yesterday at the Vatican. Father Hugo, the parish priest, clearly said: "Here we need mercy." The faith witness of 1200 Christians is concretized in a number of initiatives - some funded by CEI with 8x1000 tax deduction allocations - that give priority to the local population, the most vulnerable, such as disabled children, orphans, along with Syrian and Iraqi refugees. AVSI's commitment in education initiatives. Respect and coexistence develop at school

On Sunday November 20 Pope Francis celebrated the conclusion of the Jubilee of Mercy and closed the Holy Door of St. Peter’s Basilica. But a Holy Door will remain open: it’s the Door of the National Shrine of Our Lady of the Mount, in Anjara, a small town of 20 thousand inhabitants, in large part Muslims – Christians are only 1200 – located in the northern area of Jordan, near the border with Syria, which is witnessing one of the most severe human tragedies since the end of World war II. Since 2011, hundreds of thousands of deaths, millions of refugees, internally displaced persons and refugees and a cancer, the Islamic State, devouring from inside. In recent days, the parish was visited by a group of journalists from FISC – the Italian Federation which brings together diocesan weeklies, participating in the FISC 8 × 1000 journey “Without Borders.”

The only holy door in Jordan is located in this outpost of mercy. In the shrine is worshipped a statue of Our Lady that on May 6 2010, according to several eye-witnesses, wept tears of blood. For the local faithful the tears were caused by the suffering and violence of the armed conflicts that broke out after the Arab spring, which eventually extended throughout the Middle East.

Many Syrians arrived this far to escape the war. In this shrine, and in the adjoining parish of Our Lady of the Visitation, they found shelter and assistance. 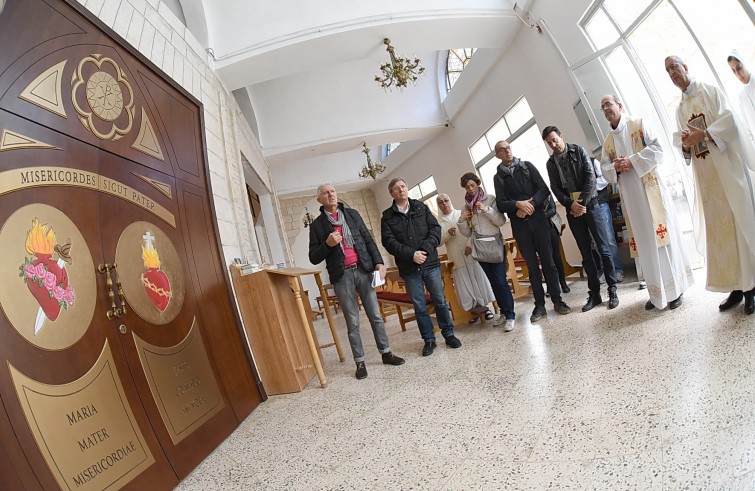 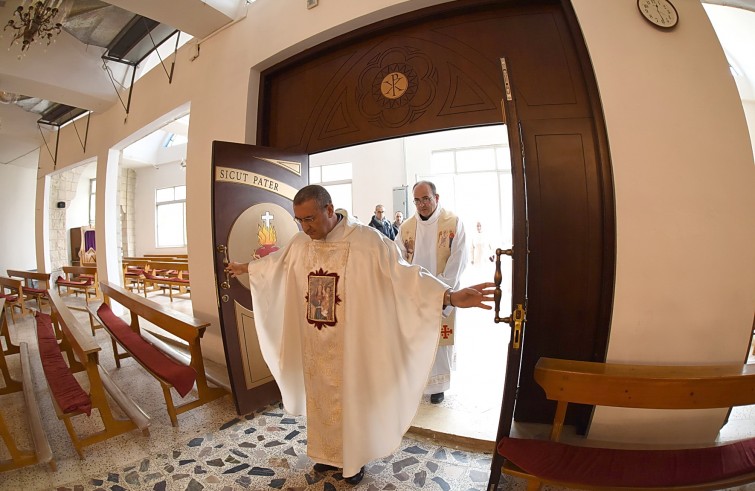 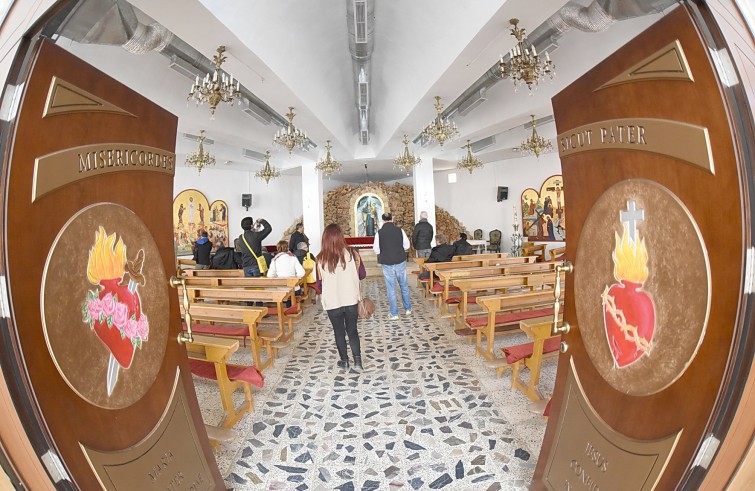 A small of door of mercy open to the big and generous heart of Jordan, a country of about 7 million inhabitants, which today has over one million and a half more people, counting Syrian refugees and displaced Iraqis. “Here the community – said Father Hugo Alvaniz, Argentinean, religious of the Religious Family of the Incarnate Word – is very active and tries to respond concretely to the needs of the local population, not just those of the refugees. We run a school with over 200 pupils – Muslims and Christians – a healthcare centre, which also provides psychological counsel, for the disabled and their families, along with an orphanage that hosts 38 children, some of whom were abandoned by their families owing to severe poverty.” The area offers no job opportunities and most inhabitants are farmers. Many families live on extremely low incomes. A large poster is still visible on the wall of the school, depicting the handshake between Pope Francis and King Abdullah II of Jordan, a memento of the historical visit of May 2014. Students meet in the courtyard before entering school, amidst subdued shouts and the silence of the mothers who accompany their young ones in the hall dedicated to the disabled, set up with the support of the “Our Lady of Peace” Centre in Amman. Doctors come and go, seeking to provide medical support also to the families living in surrounding villages and cities. Primary needs are linked to hearing and vision aids.

“Welcome, sharing and dialogue” represent a winning strategy as well as an example of coexistence between Muslims and Christians. “Our efforts don’t stop at this – the parish priest went on – we also work in prisons. A few years ago we set up also a small cultural centre for youths of all faiths and ethnicities.”

“Mutual coexistence and understanding are taught in the classroom at a very young age – said the headmistress of the school, Basemah Farah Rabadi – young people are the future of our nation. That’s why they have to learn to respect others, regardless of their faith and ethnicity.”

“The parish has promoted various projects for oil and wine production and trade dedicated to the young, with the hope – said the Argentine priest – that they may eventually find a job.” 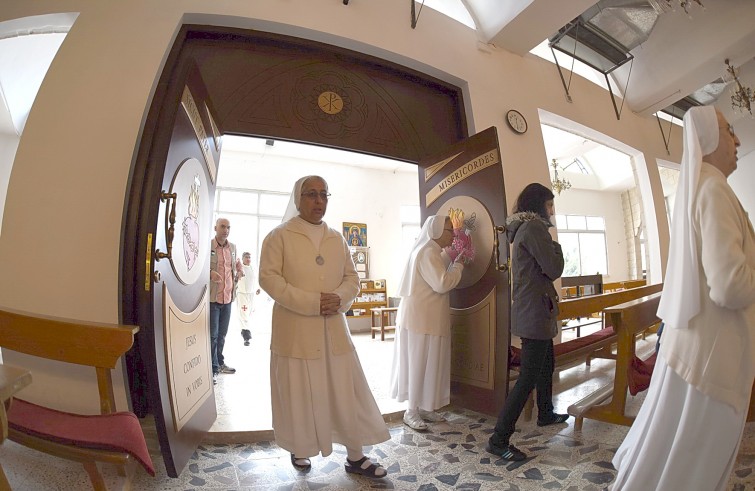 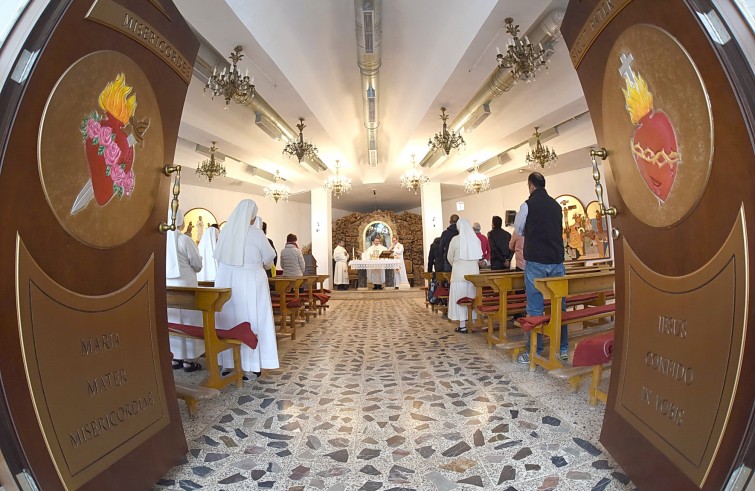 Local Christians are not alone in this effort. They are supported by AVSI Foundation and by the Italian Bishops’ Conference – CEI – that through 8×1000 tax-deduction allocations finances various solidarity projects, such as the program for the education and protection of minors from local communities and Syrian refugees. The project provides for 200 scholarships to primary schools and 100 to secondary school students. From 2014 to 2017 CEI has allocated 300 thousand Euros. The project is also addressed to teachers, said the two AVSI representatives, country manager Simon Suweis and his deputy, Nicola Orsini. “Quality teacher training courses are part of the program, with the aim of improving the relationships with students and their families, the majority of whom are of Islamic faith.”

“We don’t work miracles; those belong to the Lord – Fr Hugo said with a smile-. That’s why we always keep the holy door open.”

In Anjara, in this corner of Jordan, mercy goes hand in hand with reception. In the style of Pope Francis: “to love those who are excluded and rejected by the throwaway culture.” The holy door in Anjara’s shrine is open to everyone. “The revolution of tenderness” leaves nobody out. That’s how the just war against “heart-sclerosis” is fought in Anjara.