After the 6.5 magnitude earthquake of Sunday, October 30, the town of Norcia, now a “red zone”, is looking forward to rebuilding. The tears shed over destroyed homes and churches are mitigated by the fact that the seism caused no victims. We have been protected by Saint Benedict and saved by God. It’s a miracle”, said the vice-prior of the Benedictine Community of Norcia, Father Benedetto Nivakoff, who exhorted to rediscover the Benedictine motto "Ora et Labora" and its heritage, to instil new thrust and energy into these lands hit by the tragedy.

“This monastery that I built and all the things I prepared for the confreres, by will of God, are destined to become the easy prey of barbarians. With great difficulty I managed to obtain that of all that is still left in this land, human lives be spared.” Father Benedetto Nivakoff, vice-prior of the Benedictine community of Norcia, started his account of the earthquake of past October 30 with an a known episode of the life of Saint Benedict – narrated by Pope Gregory the Great in his “Dialogues.” The seism destroyed the church of the Saint and made unusable almost the entire city inside the old walls, but without causing deaths.

The prophecy of Saint Benedict. “The prophecy of the destructions of the Montecassino monastery (by the Longobards in 577, Saracens in 883, the earthquake in 1349, ed.’s note) reminds me of today’s earthquake in Norcia – the religious said – the tears of the Saint before the destruction of the monastic walls are our tears. Suffering and crying for the destruction of a building is understandable – we celebrate the dedication of churches, namely their consecration – but what’s most important is the life inside it. It’s surprising and consoling, when looking at the walls surrounding the city, that while all churches were damaged and houses were destroyed, there was no loss of human life.

We have been protected by Saint Benedict and saved by God. It’s a miracle.” 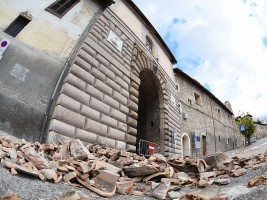 We still have a clear recollection of the images – broadcast on Sunday morning – of Norcia’s monks and local population running into the streets immediately after the first seism of 7.41 a.m., kneeling down to pray in front of the collapsed church of Saint Benedict. The memory of those instants in the words of the religious of US origins: “At the moment of the seism we were gathered in prayer. Our first thought was to save our life. We tried to shelter – even forcing them – many old people who refused to leave their homes. We also administered the sacraments, like the anointing of the Sick. We are priests, and it’s our mission to save human lives.” Now the focus is on the future, on the moral and material reconstruction of this battered land.” The heritage of Saint Benedict, for Father Nivakoff, is a significant foundation for recovery. “When Paul VI proclaimed St Benedict as Patron of Europe in 1964, he highlighted the value of the “ora et labora” – ennobled and elevated human work – of prayer and work, adding the symbol of the plough.

A time of prayer and work lies ahead – said the Benedictine father – as well as a time of ploughing. The plough is a working tool that makes us think of the future. We plough and sow the land in order to reap the fruits. After the tears, after the fatigue, will come the time of harvest. 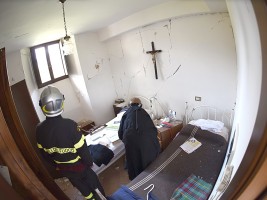 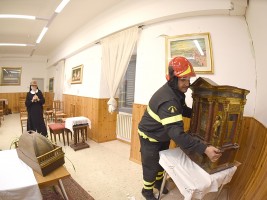 I think of the pregnant mother who waits nine months during which she is anxious, nervous, preparing to give birth. I would like to consider the time that lies ahead as a time of anticipation – without waiting months or years – and as a time of preparation that encompasses spiritual preparation.

When Norcia will come to new life there will be also a renewal in the faith.”

The Benedictine community of the city of Saint Benedict is well aware of this, and continues a life made of prayer and work that begins at 3.30 a.m. every morning. From the peaks of the mountains overlooking Norcia the monks watch over the city, imploring God’s protection.

They are not alone in this mission. The monks are accompanied by Benedictine nuns from the local monastery of Saint Anthony Abbot, as confirmed by Sister Caterina Corona, abbess of the community: “this earthquake could be an opportunity of rebirth. Saint Benedict shows us the way. He knew how to live the Gospel concretely; his spiritual and human heritage teaches us that even this tragic human event incarnates God’s salvation. On this we base our hope that this land will recover, stronger than before.” While the nun speaks she is carrying outside the damaged monastery, with the help of the firefighers, a wooden tabernacle with the Blessed Sacrament undamaged in the fall, along with a small marble statue of the Holy Virgin, that was put back on the terrace. She only stops to recite the Hail Mary and returns in the shattered building to take some personal objects, books, computers and a change of clothes for the nuns. Then she goes to the orchard where the nuns still keep the beehives. “Unfortunately many bees have died – the abbess said -. But the beehives can wait. Now we have to think of our community and of the people of Norcia left without a home.” Some of them are patiently waiting for the firefighters to shelter them safely to their damaged homes to take what is left of their belongings.” The atmosphere is motionless and unreal. Time stopped on Sunday, at the moment of the seism. Mother Catherine is aware of it and she repeats her prayer: “May we rest our gaze and energy on what is valuable and never wanes. May this tragedy be an opportunity for a renewed life, and for the believers, a renewal in the faith. An opportunity also for Europe: may it focus on human values, Christian and non-Christian values alike, concentrating its efforts on human dignity, following the example of Benedict of Norcia and his monks, from the VI century to today.”