Vatican mission to the island of Lesbos three years after the visit of Pope Francis. Msgr. Jean-Claude Hollerich, COMECE President, is a member of the delegation led by Cardinal Konrad Krajewski. “We can no longer speak of a Christian Europe unless we are willing to welcome the migrants and the poor. The forthcoming elections will need to show whether or not we are Christian. If Europe still preserves a remnant of Christianity”

A Vatican delegation is presently visiting the camps of Moria and Kara Tepe in Lesbos, marking three years since Pope Francis’ visit to the Island in April 2016, together with the Ecumenical Patriarch of Constantinople Bartholomew and the archbishop of Athens and all Greece Hieronymus II. The Vatican delegation is led by card. Konrad Krajewski, Apostolic Almoner, who gave a donation of 100 thousand Euro to the island as the Holy Father’s contribution to the service of Caritas Hellas, along with rosaries to be distributed to the local population. His Eminence is accompanied by Mons. Sevastianos Rossolatos, archbishop of Athens, and Msgr. Jean-Claude Hollerich, Archbishop of Luxembourg, President of the Commission of Bishops’ Conference of the European Union (COMECE). Contacted by phone by SIR, Msgr. Hollerich explained the purpose of the visit: “The Pope visited the island three years ago. The purpose of our mission is to reassure the people in refugee camps that the Pope is always thinking of them, that the Pope and the Church care for them. They have not forgotten them.” 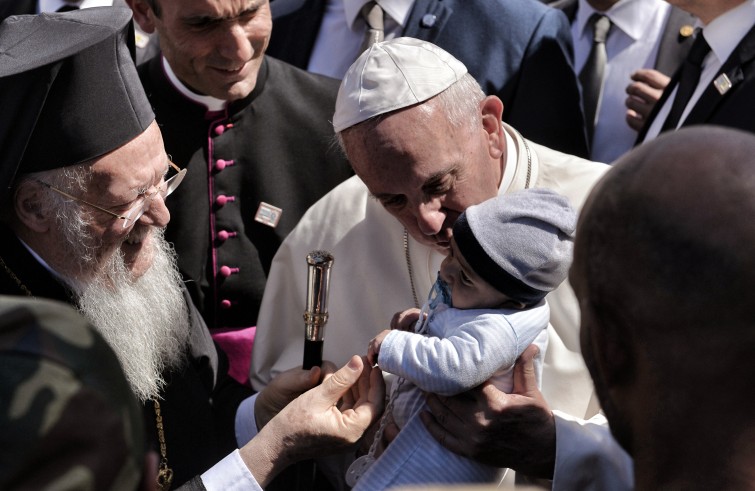 Why now?
This mission intends to give a sign to Europe ahead of the European elections. I believe this is the reason why the Pope has asked me to participate in this mission together with Cardinal Krajewski, to show that refugees are real people, men, women and children in pain. If we want there to be a Christian Europe, we are called to help them.

Could you tell us what you have seen in the past days?
I am very saddened about what I have seen. Many people came up to me to talk to me and share their problems. Sick people. Clearly, the Greek government is present and its members do everything possible for them. But it’s impossible to take care of everything, for example to guarantee appropriate medical treatment. These are suffering people. They also suffer for lack of hope. A few days ago we were invited into a tent set up by seven youths. They offered us tea. A young man told us that he studies English at night in order to be prepared to live in Europe one day. I saw a child with a serious skin disease. I saw people affected by eye diseases. This is obviously a result of the fact that these people arrived by here by boat, and at sea they went through many ordeals. I must repeat: the Greek government does a lot but it’s left alone to handle everything. We must not ask the Greek government to do more. What is needed is our solidarity.

From here the impression is that Europe has forgotten these people, and it hurts.

People arrive into Lesbos by sea. What did the refugees tell you about their Mediterranean crossings on boats?
In this respect I wish to say that it would be useful to create humanitarian corridors. It would be important for the various dioceses, the Churches in Europe, Catholic associations, parishes, to organize – with the help of the Community of Sant’Egidio that already supports them- humanitarian corridors to give these people a new opportunity, to offer the happiness and wellbeing we enjoy here in Europe. And to show that the Church in Europe enters into solidarity with the poor, that we care for them, that they are important to us.

What is your message to Europe from the island of Lesbos?
We celebrated the Feast of Europe on May 9. I am glad to have been in the periphery of Europe, with poor people, on that special day.

We can no longer speak of a Christian Europe if we are not willing to welcome the migrants and the poor.

The forthcoming election will need to show whether or not we are Christian, if Europe still preserves a remnant of Christianity. There can be no talk of Christian culture, of a Christian Europe, unless we are willing to embrace people in need.

Did Pope Francis give you a message before your departure?
He told us to assure the people that the Pope is with them. The Pope is still in Lesbos. His heart is with the people.