“We need Church leaders to come to our Country, we need them witness the life of the Churches in Syria, to speak with ordinary people in order to understand the situation on the ground.” It’s the appeal to the Churches of Europe launched by His Holiness Mor Ingatius Aphrem II, Patriarch of the Syrian Orthodox Church, during a meeting with Italian journalists in Novi Sad. Commenting on the Day for reflection and prayer on the tragic situation in the Middle East in Bari on July 7, called for by Pope Francis, he remarked: “It isn’t only an spiritually inspired initiative, it’s also a powerful sign for Christians in the Middle East that will make them perceive the closeness of world Churches. We feel abandoned by the international community, for various reasons. I welcome this initiative that I am planning to attend.”

Sorrow for the exodus of Christians from Syria. The appeal of European Churches to help Christians in the Middle East remain in their homeland and to the their leaders to visit Syria, to speak with the people, to learn the truth. Finally, words of appreciation to Pope Francis for having called for a special day of reflection and prayer for peace in the Middle East in Bari on July 7. “It’s a powerful sign for Christians in the Middle East that will make them feel the closeness of world Churches. We feel abandoned by the international community, for various reasons.” Mor Ignatius Aphrem II, Patriarch of the Syrian Orthodox Church, accepted to be interviewed on a wide range of themes. His Holiness was a panel speaker at CEC General Assembly in Novi Sad, Serbia, on the day that European Churches dedicated to the theme of “hospitality in Europe.”

Your Holiness, what’s the situation of Christians in Syria and what worries you the most?
It’s very painful to see that Christians are being forced to leave Syria and in such high numbers. It’s an alarming situation not only for us but for the whole world. Syria is not good place for Muslims, and thus for Christians… Our presence in Syria dates back to early Christianity. Today we face the serious risk that Syria, Iraq, Turkey, will be left with no Christians. The flight of the Christian population is a phenomenon that needs to be countered by helping them to stay. Fortunately, for many years we have had a government that was friendly to Christians, a government that always supported religious freedom and freedom of worship. A government that made Christians feel accepted. Without that government it is feared that Christians may become the victims of persecution. The alternative that lies ahead and that we are concerned about is an Islamic government, as happened in other Middle-Eastern Countries. Clearly, the Muslim Brotherhood is preparing to conquer Syria. We are praying that this situation may end and that Christians may live peacefully in Syria.

What is the role of the Churches?
The Church, in all its denominations, Orthodox, Catholic, Protestant, has a leading role in responding to people’s needs. In terms of aids and development, with projects aimed at creating job opportunities for the population. Simply telling people to remain is not enough. It is necessary to create the necessary conditions that will allow them to stay in the Country. For example, this summer the Churches will inaugurate a new University a few kilometres north of Damascus. The University will be open to everyone- Christians and Muslims alike. We hope that this initiative may create new jobs, promoting the vocational training of youths at local level. There are very few business activities that offer employment. If we want to help the people we must also create new jobs. Preserving the Christian presence in Syria also means supporting the Christian population, helping them to stay with their families. This is one thing that the Churches are trying to do, in addition to providing humanitarian support, reception to those forced to leave villages and cities, giving them food, water, basic necessities, clothing items. essential goods, clothes: everything they need. Now, after more than seven years of war, the situation has improved. Christians are still leaving Syria but not as many as in the past. Some Christians who have left the Country would like to return, but unfortunately most of them will not, especially those who emigrated to distant countries such as Europe, America, Australia, Canada. 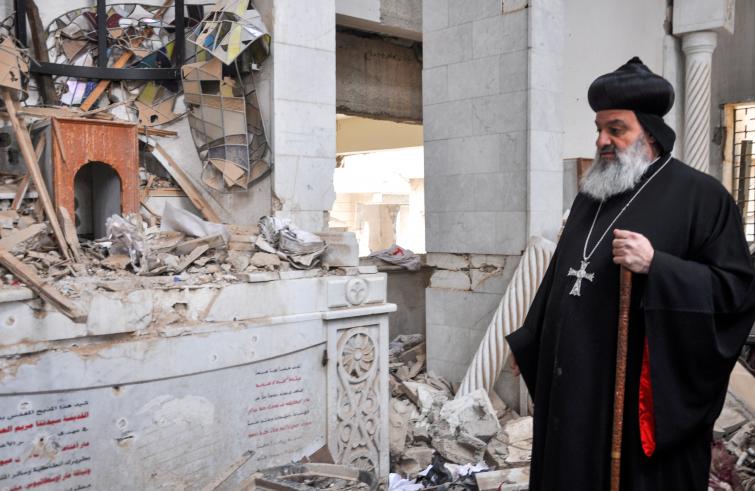 continue hoping that they are alive, since we have no evidence to the contrary.

We must be open to hope. Until now, we received no negative news about their condition. We are doing everything we can to collect information. But sadly to date we haven’t received any reliable news. Neither from the US, Russia, nor from governments and Churches in the Middle East, and nor from Turkey: no certain and reliable information has been provided to us. But we continue praying for them, we continue doing our utmost to find out all we can about their fate.

What is your request to European Churches? A message, an appeal…?
We call upon the Churches of Europe to pray for us and to help us. What we need is to know that the Churches in Europe are near us. But most of all we would like them to visit us. Then can come to get to know us, we don’t expect them to be political mediators. They can come to visit our churches, go out on the streets and speak with our people, listen to what they have to say and what they think. Only few delegations have come to visit us. There were many political delegations from different parts of Europe and some Churches did come, from England, Sweden, USA. But

“We need Church leaders to visit our Country, we need them to see the life of the Churches in Syria, to speak with ordinary people in order to understand the situation on the ground.”

Media reports don’t reflect the truth, they don’t tell the whole story. We warn against the partial, partisan perspective of news coverage, which gives a certain amount of information but conceals the rest. The truth must be told, but only by coming here, only by talking to people is it possible to have an idea of what is truly happening in Syria.

Pope Francis is planning a Day of Reflection on Prayer on the situation in the Middle East, to be held next July 7 in the city of Bari. He will be inviting Church and Christian Communities leaders from that region. What do you think about this initiative? Will you attend the event?
Pope Francis is one of the people who live for us. As I have said on many occasions, His Holiness prays for Syria and for the Middle East. Syria and the Middle East are in his heart. The fact that he summoned all Christian leaders for a Day of reflection and prayer is not only a spiritually inspired initiative,

it’s also a powerful sign for Christians in the Middle East that will make them perceive the closeness of world Churches. We feel abandoned by the international community, for various reasons. I welcome this initiative that I am planning to attend.