On Sunday January 28 Pope Francis will be visiting the Minor Basilica of St. Sophia in Rome (via di Boccea, 478). "A consolation” for the whole Ukrainian people, afflicted by the “worst humanitarian crisis since world War II", ongoing for more than 4 years. "The Holy Father’s presence among us – said His Beatitude Sviatoslav Shevchuk – is an answer to these questions. He is saying ‘you are not alone. God has not forgotten you’”

A consolation. This is how His Beatitude Sviatoslav Shevchuk, Leader and Father of Greek-Catholic Church, defined, with some emotion, the visit of Pope Francis to the Basilica Minor of Saint Sophia and to the Ukrainian community in Rome. The visit “touches the human fabric of all Ukraine” and the “heart” of a Country that for four long years has been suffering the aggression of an external force that caused millions of displaced persons, deaths and injured civilians. A conflict that the Secretary of State Cardinal Pietro Parolin defined a ‘forgotten war’. Nobody is speaking about it anymore. The Ukrainian conflict no longer hits the news while

“it’s the most serious humanitarian crisis since the Second World War.”

“The fact that people are experiencing so much suffering – said Sviatoslav Shevchuk – raises a set of questions: why? Why did God abandon us? Are we alone and forgotten by everyone? The presence of the Holy Father among us on Sunday is an answer to those questions. He is saying, ‘ you are not alone. God has not forgotten you.” 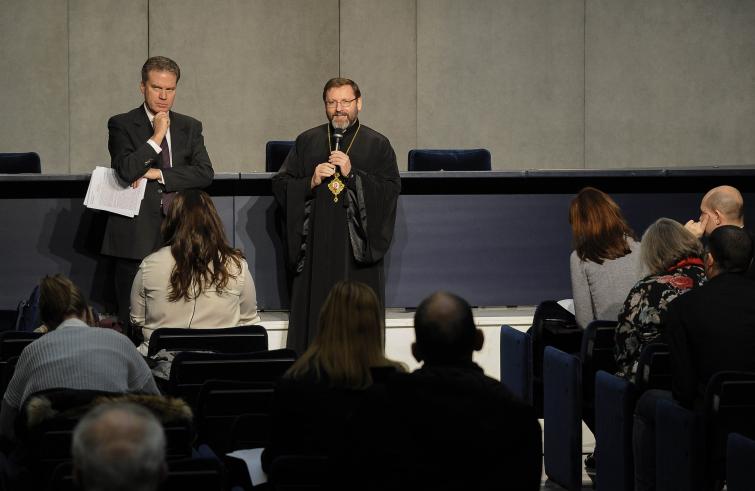 The numbers of the conflict. For the past four years 7% of the territory of Ukraine, extending for 600 thousand square kilometres with 42.5 million inhabitants, has been under occupation.  Before the war 5 million inhabitants lived in the eastern Donbass region. Today, as a result of the conflict, figures dropped to 2 million. According to international estimates, Ukraine counts two million internally displaced people, people fleeing war who found shelter inside the Country. “Military clashes are ongoing every day”, remarked the leader of the Ukrainian Greek-Catholic community in his tragic account. “Schools have been destroyed and

The city of Lugansk is deserted.

In some building compounds there are only 2/3 people left. The war not only continues, it escalates day after day.” His Beatitude Shevchuk denounced the “ecological disaster” caused by the many coal mines in the region which were closed as a result of the armed conflict and are now filled with rainwater: underground explosions risk contaminating drinking water sources. Pope Francis has been following the situation, and two years ago was launched the initiative “Pope for Ukraine” in support of the local population. Francis personally donated 5 million Euros to which were added 15 million Euros from an “extraordinary” collection” with the active involvement of all  European Churches.

Invitation and “hope.” The Pope accepted with joy the invitation to visit St. Sophia’s Minor Basilica in Rome, thereby scheduling it as his first visit to a parish in Rome in the year 2018. “We hope – His Beatitude added – that it may be a prophetic visit, acting as a gateway to peace in Ukrainian land.” The Pope has been invited to visit Ukraine on several occasions, by the government and by Latin and Byzantine bishops. His Beatitude noted that while at grassroots level people fail to understand the division between Christian Churches, after the Donbass conflict “the tensions between institutional Churches of Ukraine have grown worse.” But “people expect a ray of light from the Church to overcome the crisis and build roads of peace and future based on Christian values.” 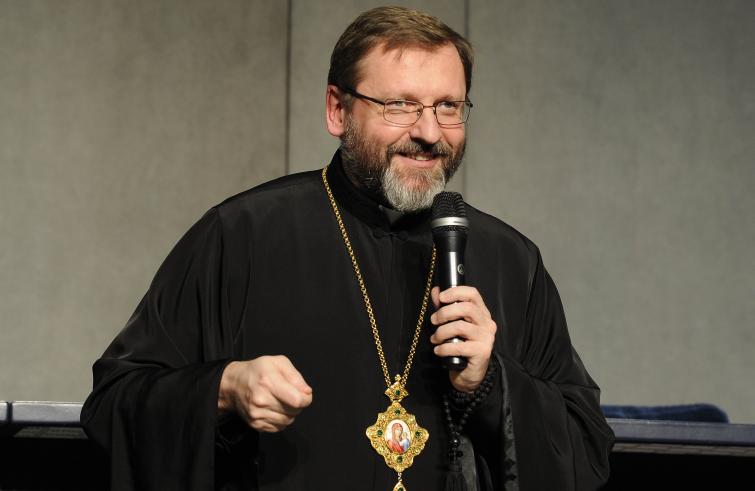 Ukrainians in Italy, how many they are and what they do. At least 3000 people will convene to welcome Pope Francis. Most of them are immigrants and women “forced to leave their homeland to earn a living and send money to support their families in Ukraine.” The St. Sophia Basilica is a point of reference for the large Ukrainian community in Rome. There are 200 thousand Ukrainians in Italy according to official estimates, but in reality they amount to twice as many, constituting the fifth largest foreign community in the Country. In Rome live 14 thousand Ukrainians. Figures increase every year, thus 145 Ukrainian Greek-Catholic communities with 42 priests provide pastoral care nationwide. It’s a population with deep-rooted faith: some 17 thousand Greek-Catholic faithful attend services every Sunday, as many as 70 thousand during the religious holidays. It will be the third visit by a Pope to the Minor Basilica of Saint Sophia: the first visit was by Pope Paul VI who consecrated it in 1969 and then by Pope John Paul II in 1984. The visit will begin at 16:00. Francis will be welcomed by His Beatitude Sviatoslav Shevhuck, who will accompany him inside the Basilica where will be recited a short prayer and a Christmas chant. In fact the faithful of Oriental Churches are still celebrating the Christmas period that will end on February 18 with the feast of the Presentation of Jesus in the Temple. His Beatitude will then deliver a welcoming address and introduce the Ukrainian community. Pope Francis will also deliver a speech in which he will extend his greetings to the members of the community. While there the Holy Father will gather in prayer in the crypt of the Basilica where are buried the mortal remains of bishop Stephan Czmil, especially dear to Pope Francis. In fact Father Czmil taught him the Eucharistic celebration according to the Ukrainian rite, introducing him to a “different liturgy.” Three thousand Ukrainian faithful are expected to welcome the Pope on Sunday. The Pope will then be introduced to all the recipients of “recognitions” of the Blessed martyr Emiliano Kovc, died in Majdanek concentration camp, who gave his own life to save Jews during the Shoah. “When we are asked who are the Ukrainians living in Italy and which mission they intend to carry out in the Country – said His Beatitude Sviatoslav Shevchuk – we reply that Blessed Kovc is our answer: we are here in Italy to build bridges.”