Delusion among separatist fringes, especially among CUP youths, the confusion and uncertainty of political analysts. Expectations over Madrid’s response. Spain and Catalonia woke up with these feelings after yesterday’s Parlament de Catalunya  speech by Catalan President Carles Puigdemont.

Tuesday October 10. At 19.11, over one hour later than scheduled, the Parlament de Catalunya session raised extraordinary interest. More than one thousand journalists (including 300 foreign correspondents) arrived to witness the anticipated declaration of independence of Catalonia. Outside the building, surrounded by the policemen’s security cordon, pro-independence supporters nervously looked forward to when the Catalan President, Carles Puigdemont, would deliver the long-awaited words: Independent Catalan Republic. The delay – as was later made known – had been caused by some disagreements on the part of the CUP – a minority parliamentary group, yet very influential with regard to the issue of independence.

Three minutes later Puigdemont started delivering his speech broadcast by major TV networks. Also President Mariano Rajoy and Vice-President Soraya Sáenz de Santamaría followed from Madrid, along with many worried Spanish citizens. In slightly more than half-an-hour Puigdemont retraced the events of September 6, when the “disconnection law” was adopted, a landmark reached after years of “humiliation” caused by the central Government, since Spain’s Constitutional Tribunal rejected parts of a new statute of autonomy of Catalonia. With elegant wording Puigdemont managed to be convincing about the evilness of a Spanish State unable to meet the Catalan people’s request to “be free to decide”, accusing the central governments of having caused the yearning of so many Catalans to leave Spain. 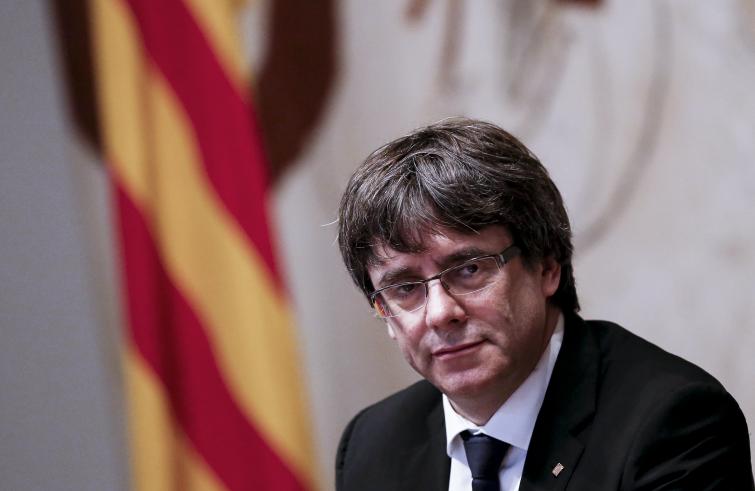 At 19.33 Puigdemont addressed all Spanish citizens in Spanish: “We are not delinquents, we are not crazy.” “The people cannot be forced”, he underlined. Then, referring to the outcome of the referendum of October 1st, he went on in Catalan: “I accept the mandate from the people for Catalonia to become an independent state.”Expressions of passionate enthusiasm broke out outside the Parlament, but they only lasted a few seconds.Puigdemont, seen the situation of instability, proposed to “suspend” the effect of the declaration of independence so dialogue could start. Hearing those words, probably everyone in Spain, exception made for pro-independence activists, breathed a sigh of relief, maybe even the President of the European Council Donald Tusk, who only a few hours earlier had addressed the following words to Puigdemont: “I ask you to respect, in your intentions, the constitutional order and not to announce a decision that would make such dialogue impossible.”

How can Puidgemont’s speech be defined? Some commentators noted his “great ability to be ambiguous”, others mentioned his “inconsistency.” However, the most accurate criticism is probably the one made by Socialist MP Miquel Iceta, during the interventions of parliament groups spokespersons: how can you suspend something that was never approved? In fact, two hours later, upon the conclusion of the Parlament session, all 72 MPs belonging to the pro-independence bloc signed a document which is yet to be transmitted to the Chamber.

The delusion of separatists, especially of the CUP youths. Confusion and uncertainty ensued among political analysts who fail to understand the meaning of Puigdemont’s speech, voiced also by Soraya Sáenz de Santamaría, who around 23:00 told journalists: “President Puigdemont “doesn’t know where he is, where he is going and with whom he wants to go.”