Also French President Emmanuel Macron will attend today’s service of homage to Fr Hamel in the church of Saint-Etienne-du-Rouvray, south of Rouen, in Normandy, exactly a year after and at the same time in which the priest was brutally slain by two youths affiliated to the self-declared Islamic State. “He was a humble, reserved priest. He seldom spoke, but he occupied a special place in the hearts and lives of the people”, the vicar general of the diocese of Rouen, Father Philippe Maheut, told SIR. "It’s the holiness of daily life, which means remaining faithful to one’s daily deeds, seeking to do them well”

Today is dedicated to Father Jacques Hamel. A few minutes after 9 o’clock, on July 26 of 2016, two youths armed with knives broke into the church of Saint-Etienne-du-Rouvray, south of Rouen, Normandy. The priest was celebrating Mass for the marriage anniversary of an elderly couple. For 50 minutes the youths kept hostage the few faithful gathered in the church, they filmed themselves with their mobile phones as they severely wounded a man and slaughtered the priest. When the special forces barged into the church, the two assailants were killed. They were later confirmed to be affiliated militants of the Islamic State, and their identities were revealed: Adel Kermiche and Abdel Malik Petitjean. Over the past year the holy reputation of Father Hamel became known throughout France. His grave has become a veritable pilgrimage destination. Past April bishop Mons. Dominique Lebrun, announced the opening of the cause for this beatification. Bishop Lebrun will celebrate Mass, attended also by the President of the French Republic Emmanuel Macron, commemorating the first anniversary of the priest’s death in his own church. “Today is a day of remembrance and reflection for us”, the vicar general of the diocese of Rouen, Father Philippe Maheut, told SIR. “We shall commemorate what happened a year ago in a special way. In fact we decided to celebrate Mass at 9.00 a.m., which is the time when Father Hamel was celebrating Mass on the day he was murdered.”

Father Maheut, could you describe the first year since the death of Father Hamel? How did the city of Rouen manage to cope with such a tragic event?  It has unquestionably been a very intense year. As our bishop often says, it was a year of lights and shadows. The shadows are those of suffering, of misunderstanding, of injustice. The lights are all those people – men and women – who have gathered around us, who drew near their neighbours and promoted initiatives of dialogue and peace.

The anniversary of Father Hamel’s death will thus be a time for mourning as well as an occasion to reinterpret those tragic events and focus on what is luminous, the fruits of his martyrdom

It came as an utter shock. Two youths filled with hatred broke into a church and slaughtered an elderly priest, while the faithful lay as hostages and a man was seriously wounded. Sadly, hatred brings hatred. How did the Church of Rouen react?

Nobody has called for revenge. The appeals were all to the courage of love and forgiveness. It’s the Christian answer to hatred.

Among the most powerful statements delivered in the past year figure those of the leader of the Muslim community of the city. He said: “We were afraid that Christians would no longer love us, instead we have found that not only do they continue to love us, in fact the murder of Father Hamel has brought Christians and Muslims closer to each other.”

Who was Father Hamel?

He was a very simple priest. He was very humble and very reserved. Undoubtedly, of all the priests in the diocese, he was the one who spoke the least.

In my opinion this highlights the daily ministry of the priest. We were all deeply moved by the many tokens of closeness we received by the people over the past year; by those who had been married by Father Hamel or whose children he had baptized, or whose dear ones’ funerals he had celebrated. Father Hamel had an important place in the lives of all of these people. These simple gestures show the nature of the priests, along with the important place they have in people’s hearts. The murder of Father Hamel shed light on all of this. 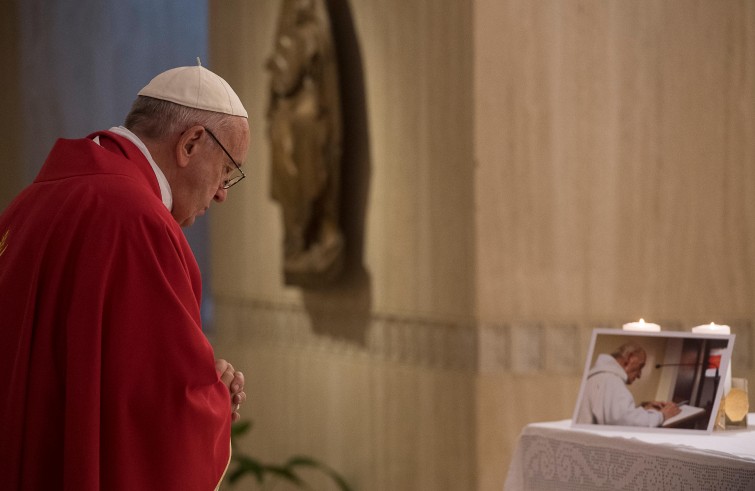 The cause for his beatification was recently opened. Speaking of Father Hamel, Pope Francis was the first to say: “We should pray to him, he is a martyr! And martyrs are blessed.” Which form of holiness did Father Hamel shed light upon? He was a very simple priest, a priest who led the simple life of a priest …  In my opinion it’s the holiness of everyday life, which means being faithful to one’s actions day after day, seeking to do them well. Holiness is a destination and a calling for us all. It cannot be confined to people who perform extraordinary gestures. There are saints who did extraordinary things. But there are also figures like Father Hamel, who represent the holiness of everyday life today, lived out in what is ordinary.

The ordinary life of a priest that accompanied him until his very last breath, when, just as the two killers were about to slay him, he said: “Go away, Satan.” These words make us understand that until the end Father Hamel was able to have clarity of mind, identifying the workings of Evil in the two youths, and thus, perhaps, even forgiveness.  Indeed, or at least, that’s how we understand and interpret that tragic moment.

It reminds us of the words spoken by Jesus on the Cross when he said: “Father, forgive them, for they do not know what they are doing.”.

In fact the two youths didn’t know what they were doing for Satan was at work within them and those were not human actions. Unfortunately the forces of Evil are present in our world, and they are at work in the hearts of some people.

Today many people will gather to pay homage to Father Hamel. Many people go on pilgrimage to pray on his grave. His beatification cause has been opened and already 69 people have said they will share their personal witness. What is it in the life of this priest that attracts and draws so many people near him?   I think it’s the people’s need for closeness, that Father Hamel embraced. Father Hamel was a priest known for his closeness: he was a simple man who understood, or sought to understand, people’s lives. I think this simplicity is the source of attraction. Today many people pray on his grave because they see in Father Hamel a simple person that is capable of understanding. He was a priest. And priests are there to offer others their ability to listen and to understand. I think that this is one of the reasons.