AEE2 was the first Ecumenical Assembly held after the fall of the Berlin Wall. For the first time the representatives of all Christian Churches convened in Europe free of political pressure, spies and constraints. Graz was an important part of the ecumenism of encounter that holds great value in the process for increased unity among us Christians

Twenty years ago, 700 delegates and 10 000 participants convened in Graz to attend the Second Ecumenical Assembly (AEE2). The meeting, held June 23-29 1997, was a fruit of the First Ecumenical Assembly in Basel (1989), followed by the third, to date the last, Assembly in Sibiu of 2007. It was organized by the Council of European Bishops’ Conferences (CCEE) together with the Council of European Churches (CEC). It was themed: “Reconciliation, a Gift of God and a Source of New Life.” What is the legacy of the Assembly twenty years later? I shall attempt give a threefold answer, more personal than theological or political, and focus on

The preparation process that lasted several years has meant, for me and for many others – Catholics, various Protestant denominations, Orthodox in their full diversity, members of free Churches and many others – learning to get to know one another, even at personal level.

This ecumenism of friendship prompted the development of deep human relations, many of which continue still today at close, personal level.

In Ecumenism, as in many other areas, this involves first of all mutual trust, understanding, and the respect of mutual difference. Through Graz I had the opportunity to understand a lot of the life of Christian Churches in Europe, as never before in my life. What is it like to be a Catholic in Norway? How does an Orthodox feel living in Holland? How do Evangelicals lead their life in Bulgaria? One could go on for hours talking about the difficulties connected to the quest for common grounds, about the surprise experienced before diversity, of the joy over what is shared, about the richness of ecumenism. Many delegates and participants spoke about those experiences. It is a precious token of AEE2.

Various documents were adopted in Graz .

This ecumenism of agreements should not be underestimated.

In re-reading those documents through today’s lenses one is immediately impressed by the deepness of the reflections and the spirituality they convey, despite the fact that many aspects are marked by the passing of time. Ecumenism is a spiritual process, it does not entail bargaining over terminology and expressions. Nonetheless, even when the theme was “reconciliation”, it became necessary to adopt a concrete approach and speak out together publically about the defence of weak brackets, of an economy set under the banner of mercy, of the politics of peace, of family and life and of the distribution of responsibilities at global level, thereby bearing witness to our faith. 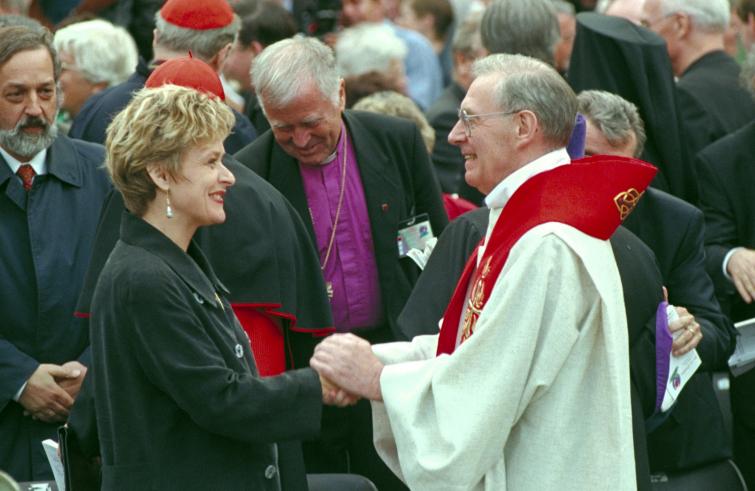 AEE2 was the first major Ecumenical Assembly held after the fall of the Berlin Wall. For the first time the representatives of all Christian Churches had the opportunity to meet in Europe free of political pressure, spies, and constraints.

Graz played an important role in the ecumenism of encounter which holds deep value in the process for increased unity among us Christians: Pope Francis’ journey to Lund, the European meetings of Taize, or the two Ecumenical Days of Churches in Germany are further examples of this.

I cherish unforgettable memories of the national meetings envisaged in the programme of the week in Graz with two dedicated events, notably the fact that Christian Churches of a given Country gathered in prayer: dialogue and agreements were already a common practice before Graz in many Countries, but to others AEE2 acted as a thrust to meet, to spur mutual trust and practice mutual respect to take concrete steps along the path of reconciliation. It was necessary to travel to Graz to meet one another, for it did not happen “at home.”

Twenty years after Graz it’s time to plan a fourth Ecumenical Assembly. Christians’ contribution is needed especially now, against the backdrop of the European crisis. Surging populism and nationalisms, Brexit, the threats to democracy and freedom, in addition to the many ethical issues, constitute an appeal to us Christians to bear common witness. CCEE and CEC should convene, and along with the many lay Christian movements in Europe, move forth towards a new Assembly to be held in the next ten years.

Reconciliation is an ever-renewed commitment.

As stated in the final message of Graz (A34): “Our Christian faith demands that we strive for the freedom and dignity of all peoples. The Spirit fills us with confidence and courage and with the recognition that we have been entrusted with the message and ministry of reconciliation.”