Ten speeches, three cities, one common denominator: "unarmed peace.” It's a snapshot of the Pope's journey to Japan, the second leg of the 23rd apostolic visit that began with a three-day visit to Thailand. The meeting with the victims of the triple disaster. The resilience of the missionaries, like St. Paul Miki. Overcoming the challenges of bullying, loneliness, isolation and indifference to which young people are exposed

Hiroshima, Nagasaki, Tokyo. Three cities, one overarching appeal for disarmament and peace. The second leg of the Pope’s 32nd Apostolic journey that began with a three-day visit to Thailand, the meeting with the small Japanese flock, where Catholics make up 0.42% of the overall population, was a pressing call to abolish nuclear weapons to avoid jeopardizing the future of our planet forever. “The use of atomic energy for purposes of war is today, more than ever, a crime not only against the dignity of human beings but against any possible future for our common home”, the Holy Father said in Hiroshima, where  the atomic bomb was dropped 74 years ago. His words echoed the message read yesterday in Nagasaki.

“The use of atomic energy for purposes of war is immoral, just as the possessing of nuclear weapons is immoral”,

Francis cried out in the meeting for peace at the Memorial having the same name, where he stood in silent prayer for ten minutes, surrounded by the graceful composure typical of the Japanese people. 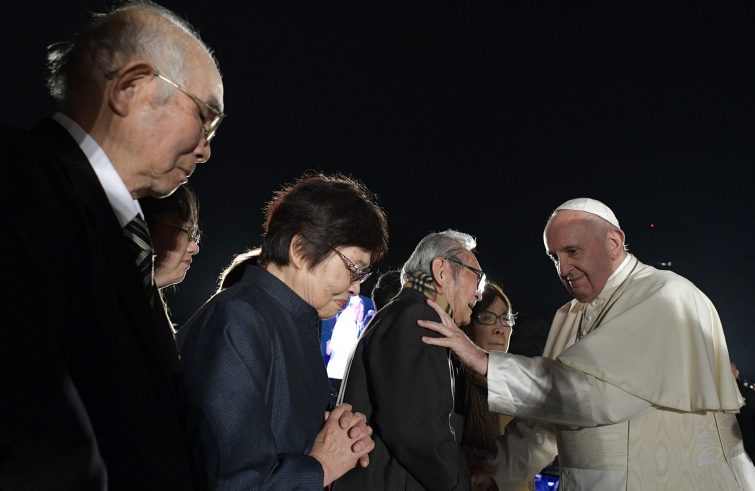 “A true peace can only be an unarmed peace”,

was his final appeal. “In today’s world, where millions of children and families live in inhuman conditions, the money spent and profits made to manufacture, modernise, maintain and sell increasingly destructive weapons is a never-ending attack that cries out to heaven”, Francis cried out in his message read at the Atomic Bomb Hypocenter Park of Nagasaki.

“I will visit Nagasaki and Hiroshima, where I will offer prayers for the victims of the catastrophic bombing of these two cities, and echo your own prophetic calls for nuclear disarmament.”

The Pope referred to the highlight of his visit already in his first address to the bishops of Japan. In his meeting in Tokyo with the victims of the 2011 triple disaster, besides the earthquake and the tsunami Bergoglio recalled the Fukushima Daiichi nuclear accident and its impact, expressing once again his “concern about the continuing use of nuclear power.” In his meeting with authorities in Tokyo the Pope renewed his plea for disarmament and peace: “the destruction generated by atomic bombs in Hiroshima and Nagasaki will never take place again in human history.”
The Pope evoked the tragedy of the atomic bomb in the Mass celebrated in Baseball Stadium in Nagasaki, cradle of Christianity in Japan, disfigured by the bomb dropped by Enola Gay bomber on August 9 1945, yet enlightened by a model of resilience until the martyrdom of Saint Paul Miki – the first Japanese Catholic religious, whom the Pope mentions in almost all of his speeches – and the many “hidden Christians” who steadfastly resisted persecution for more than two centuries. 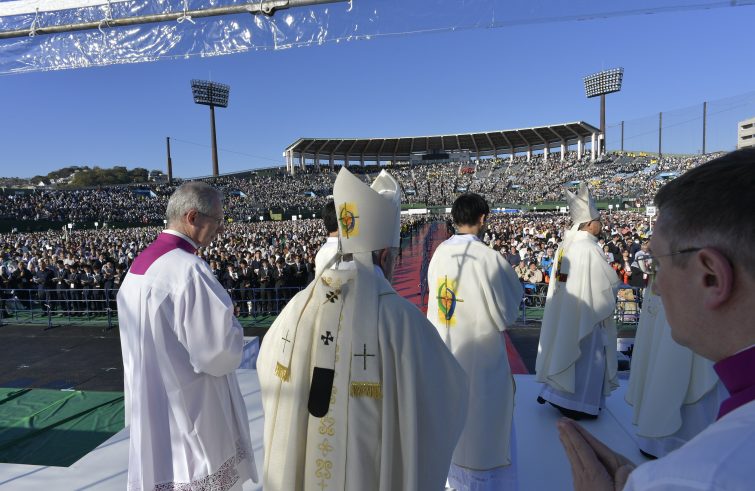 “Let us spend a moment in silence, so that our first word will be one of prayer for the more than eighteen thousand people who lost their lives, for their families and for those who are still missing”,

the Pope said in the opening lines of his speech at Bellesalle Hanzomon in Tokyo, where he met the victims of the “triple disaster”, the magnitude 9.0 earthquake that caused the tsunami and the accident at the Fukushima nuclear power plant in March 2011. “Wars, refugees, food, economic disparities and environmental challenges” are major issues that “cannot be understood or treated separately”, the Pope said echoing Laudato sì. “One of our greatest ills has to do with a culture of indifference”, Francis reiterated. In his farewell address at Sophia University, the Catholic university founded by the Jesuits in 1013, the Pope called for an “ever more inclusive” educational institution “capable of walking with the poor and the outcasts of our world.”

“We must all unite against this culture of bullying and learn to say “Enough!”

Francis told young people   whom he met in Tokyo’s Cathedral. “It is an epidemic, and together you can find the best medicine to treat it.’” Many people today are like “zombies” whose hearts “have stopped beating because of their inability to celebrate life with others”, is the image chosen by the Pope. “Many people throughout our world are materially rich, but live as slaves to unparalleled loneliness! “Loneliness and the feeling of being unloved is the most terrible form of poverty”, Francis said quoting the words of Mother Theresa. 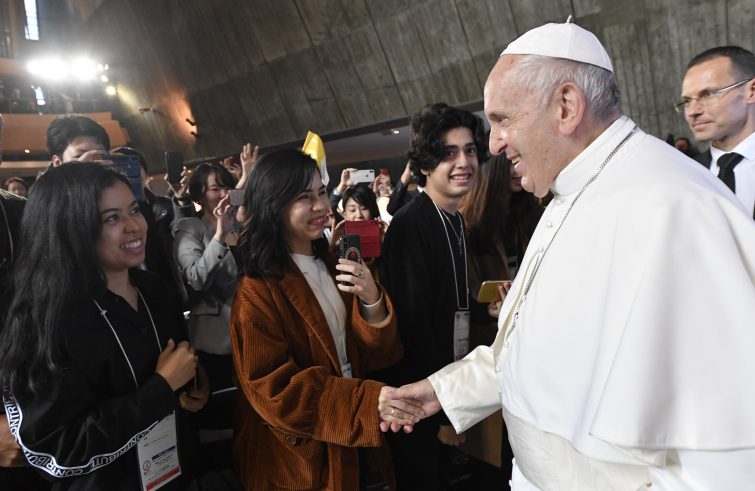 “It is not so important to focus on what I live for”, his proposal to young people: “Things are important, but people are essential; Without them we grow dehumanized, we lose our faces, we lose our names, and we become just another object.” “In order to grow, to discover our own identity, our own goodness and our own inner beauty, we cannot look at ourselves in a mirror”, Francis’ guidance:

“We have invented all sorts of gadgets, but we still can’t take selfies of the soul. To be happy, we need to ask others to help us, to have the photo taken by someone else. We need to go out of ourselves towards others, especially those most in need.”

As the migrants and refugees .