The second day of the Papal visitation to Japan was a major, heartfelt appeal to peace and disarmament, which entails a ban on nuclear weapons. “Never again war, peace is unarmed”, is the common thread of the visits to Hiroshima e Nagasaki

“The use of atomic energy for purposes of war is today, more than ever, a crime not only against the dignity of human beings but against any possible future for our common home.” In his address in Hiroshima, the place where the atomic bomb was dropped 74 years ago, the Pope spoke clear an unequivocal words in favour of peace and disarmament, that echoed his message at the beginning of the second day in Nagasaki, Japan.

“The use of atomic energy for purposes of war is immoral, just as the possessing of nuclear weapons is immoral”,

Francis exclaimed in the Meeting for Peace at the Peace Memorial in Hiroshima. “We will be judged on this”, the Pope warned. “Future generations will rise to condemn our failure if we spoke of peace but did not act to bring it about among the peoples of the earth.” 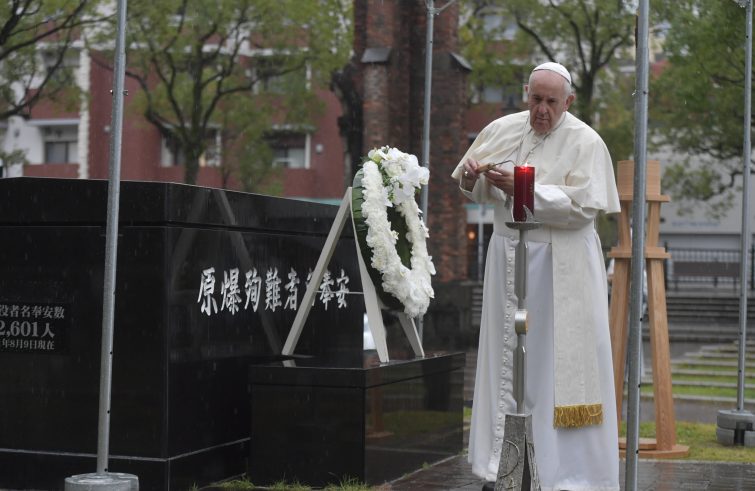 “A true peace can only be an unarmed peace”,

said the Pope, quoting Gaudium et spes to reiterate that “peace is not merely the absence of war… but must be built up ceaselessly”: “It is the fruit of justice, development, solidarity, care for our common home and the promotion of the common good, as we have learned from the lessons of history.”

his final appeal. “Here in this city which witnessed the catastrophic humanitarian and environmental consequences of a nuclear attack, our attempts to speak out against the arms race will never be enough”, Francis exclaimed in the message read at the Atomic Bomb Hypocenter in Nagasaki: “In a world where millions of children and families live in inhumane conditions, the money that is squandered and the fortunes made through the manufacture, upgrading, maintenance and sale of ever more destructive weapons, are an affront crying out to heaven.”

“No one can be indifferent to the pain of millions of men and women whose sufferings trouble our consciences today. No one can turn a deaf ear to the plea of our brothers and sisters in need. No one can turn a blind eye to the ruin caused by a culture incapable of dialogue”,

Francis cautioned. “We must never grow weary of working to support the principal international legal instruments of nuclear disarmament and non-proliferation, including the Treaty on the prohibition of nuclear weapons”, is the Pope’s appeal from Nagasaki, where Francis reiterated past July’s plea of Japanese Bishops urging the abolition of nuclear weapons. 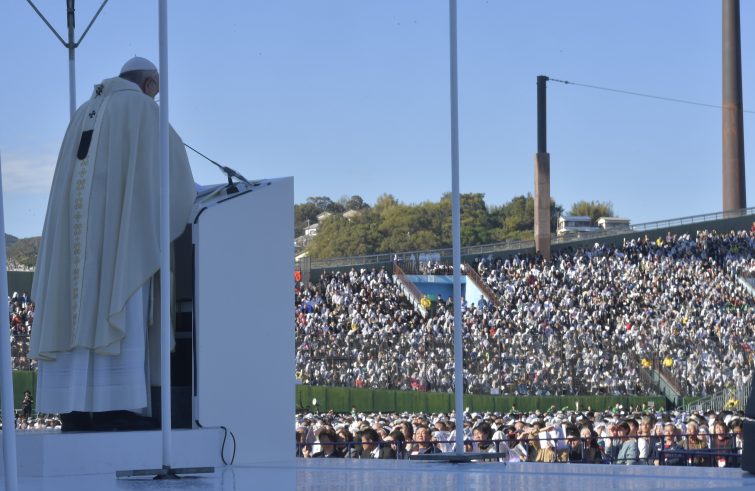 “Convinced as I am that a world without nuclear weapons is possible and necessary, I ask political leaders not to forget that these weapons cannot protect us from current threats to national and international security”, the Pope said. “We need to ponder the catastrophic impact of their deployment, especially from a humanitarian and environmental standpoint, and reject heightening a climate of fear, mistrust, and hostility fomented by nuclear doctrines”, is the path indicated by Francis, based on the awareness that “The current state of our planet requires a serious reflection on how its resources can be employed in light of the complex and difficult implementation of the 2030 Agenda for Sustainable Development, in order to achieve the goal of an integrated human development.”