"Christians are persecuted for the name of Christ. In the letter to Diognetus we read that they are bearers of principles and of a spirituality that clashes with worldly mentality. This is true for all Christian confessions. Executioners never ask if you are Catholic or Orthodox. Even the Christians killed in Sri Lanka on Easter Day can be said to be true martyrs.” Interview with Card. Gualtiero Bassetti, President of the Italian Bishops' Conference (CEI)

“Political solutions must be found and justice implemented in those States of the world where Christians are still exposed to persecution”, repeats Card. Gualtiero Bassetti, archbishop of Perugia-Città della Pieve, President of the Italian Bishops’ Conference, upon his return to Italy from a visit to Sri Lanka during which he visited the churches struck by deadly terrorist attacks on Easter Day.

What brought you to visit Sri Lanka?
I left at the invitation of Card. Albert Malcolm Ranjith Patabendige Don, Archbishop of Colombo. I participated in the inauguration of two facilities built also with the Eight-Per-Thousand tax devolution to the Church, consisting in a farm with dozens of young people working in cattle breeding and dairy production, along with a large education centre dedicated to Benedict XVI in a village where once stood a Marist school. I also visited the churches of St. Anthony in Colombo and of St. Sebastian in Negombo, the sites of the horrific attacks.

What Country did you find?
Sri Lanka is a country that has made considerable social progress. No slums are to be found anywhere near Colombo and other major cities. The State has built thousands of social housing units.

The Church represents approximately 10% of the population, yet it is a highly appreciated institution thanks also to the leadership of Card. Ranjith, a point of reference for all.

I personally experienced the depth of the dialogue with the Buddhists, representing the leading religion in the country. Buddhist leaders and faithful have great esteem for the cardinal. Indeed, when attempts were made to eliminate Buddhism as a state religion he stood up for them, perceiving the disastrous consequences of a secular vision for Sri Lanka.

Recent findings show that 245 million Christians worldwide face high levels of persecution (amounting to 10% of all Christians) and the situation grows worse every day. What are the causes?
Christians are persecuted for the name of Christ. In the letter to Diognetus, we read that they are bearers of principles and of a spirituality that clashes with worldly mentality: “Christians love all men, but all men persecute them. Condemned because they are not understood, they are put to death, but raised to life again.” This involves all Christian denominations. The Pope tells us in clear terms that

Even the Christians killed in Sri Lanka on Easter Day can be said to be true martyrs.

If there are victims of persecution, there are also those who persecute. Are some religions more violent than others?

“If the world hates you, remember that it hated me first.” Every religion, which is inherently good and with which we can dialogue, has its own fanatical elements. “Gott mit uns” was carved on the belt buckles of the Reich soldiers: “God is with us”. He was certainly not our God. The instrumental use of religions can inflict incalculable damage. It is almost certain that the massacres in Sri Lanka were meant to incite Christians against Islam. Some groups of Christians were already arming themselves for revenge, the Cardinal succeeded in calming the spirits by making them understand that they were all being manipulated. 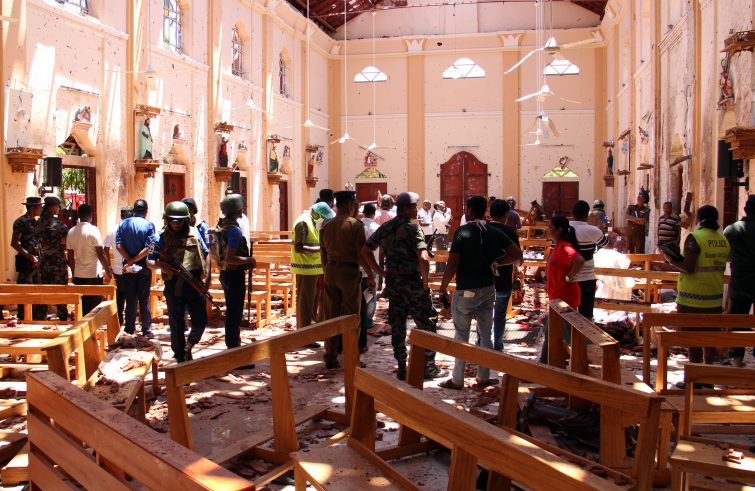 The worst forms of persecution occur not only in countries under military dictatorship or in conditions of severe instability, but also in countries considered democratic, such as India. Is there a political responsibility?
Political solutions must be found and justice established in countries of the world where Christians are still under persecution. There are perverse dynamics emanating from politics that require the utmost attention. Card. Ranjith has requested a fact-finding committee to shed light on the incidents in Sri Lanka.

Do you perceive danger in a Europe divided between populism and nationalist resurgence?

I have always said that we need to reconcile, to heal, to dialogue.

What can be done for these brothers and sisters in the faith?

The Italian Church at the forefront of protecting persecuted Christians in the world. It is the Church that enjoys the guidance of the Vicar of Christ and is close to the Holy Father in the mission of proclaiming the Gospel and bringing peace.