The third audience granted by Pope Francis to President Putin since the beginning of his pontificate lasted nearly one hour. “A substantial speech”, recognized the Russian President, who gave the Pope the first DVD version of Russian director Andrej Konchalowski’s film on Michelangelo. The private talks focused, inter alia, on the “environmental issue” as well as on themes relating to “current international affairs, with particular reference to Syria, Ukraine and Venezuela". A Memorandum of Understanding was signed envisaging cooperation between the "Bambino Gesù" Hospital and the Paediatric Hospitals of the Russian Federation.

The audience granted by the Pope to the President of the Russian Federation, Vladimir Putin, lasted almost an hour. Issues broached during the meeting, reported the “ad interim” director of the Press Office of the Holy See Alessandro Gisotti, include, inter alia, the “environmental issue” as well as themes relating to “current international affairs, with particular reference to Syria, Ukraine and Venezuela.” A Memorandum of Understanding was signed envisaging cooperation between the “Bambino Gesù” Hospital and the Paediatric Hospitals of the Russian Federation. This is the third time that the Pope and Putin have met in the Vatican, and all three times the meeting was marked by a considerable delay on the part of the guest. In the first audience, on November 25, 2013, Putin arrived at the Vatican about 50 minutes late: the same happened today: the audience began about fifteen minutes later, delayed by an hour counting Putin’s late arrival at the Cortile del Belvedere until the beginning of the talks in the private library of the Pontiff. On the occasion of the second audience granted by the Holy Father to Putin on 10 June 2015, the Russian Head of State registered a 70-minute delay. The Russian President arrived at the Vatican at about 14.05.  Prior to entering the private library the Holy Father went over to greet President Putin, who was waiting for him alone in the Tronetto Room. Francis shook his hand and greeted him with a “welcome.” The private conversation began about fifteen minutes after his arrival; the Pope appeared relaxed and smiling.

“Thank you for your time. It was a very substantial, interesting talk”,

Putin said to the Pope immediately after the exchange of gifts. The news was reported by the pool of journalists admitted in the private audience. They also made known that the Holy Father gave Putin an etching dating back to 1739, depicting a view of St. Peter’s: “So you will not forget Rome”, said Francis addressing the Russian President, to whom he also gave the medal of the sixth year of his pontificate, a symbol of peace. President Putin gave the Pontiff a very large icon of Saints Peter and Paul: “You celebrate them on 29 June, we celebrate them on 12 July”, the President said. Putin’s other gift to the Pope is Russian director Andrei Konchalovski’s film “Sin” on Michelangelo, not yet released in theatres, along with a related book with photos taken during filming. “He’s one of our most renowned film directors,” Putin remarked. At the end of the meeting, Pope Francis gave the Russian President a copy of this year’s Message for the World Day of Peace – “I signed it for you today”, he told him with regard to the practice adopted for all Heads of State – along with the Abu Dhabi document, a copy of Gaudete et Exsultate and the post-Synodal Apostolic Exhortation to Young People. 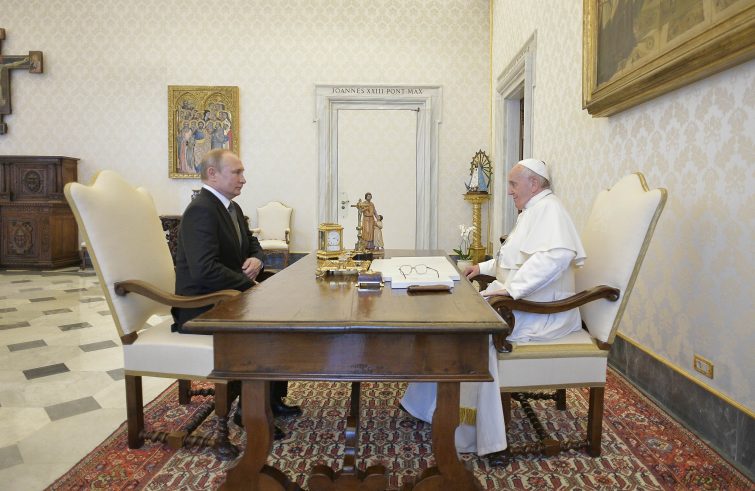 with one thousand policemen mobilized for the first official visit to Italy of the Russian President in four years, including sharpshooters stationed on roofs and terraces, bomb squads and undercover special forces units. Putin is also followed “closely” by his personal bodyguards and by a convoy of over 30 armoured vehicles. St. Peter’s Square is closed off to tourists and pilgrims, except for the passageways to the Basilica, from early morning hours, while the city centre is on security lockdown, with the traffic prohibited in a “green zone” that covers an area with 50 streets. No demonstrations allowed, telephone conversations are screened, airspace is guarded by drones and helicopters. Among the curiosities: a team of former KGB agents had already been to Rome for inspections last week, especially in the area of the Hotel St Regis, where Putin’s staff is stationed and where the president himself could rest, even though given the tight schedule no one knows when. After the papal audience the President’s agenda envisages a meeting with the President of the Italian Republic Sergio Mattarella, for a power lunch at the Quirinale and with Prime Minister Giuseppe Conte in the afternoon, and then for the evening dinner prior to departure from Fiumicino airport scheduled at 10 pm. According to the official program, the Russian leader will hold a joint press conference with PM Giuseppe Conte at Palazzo Chigi at the end of the talks. Subsequently, Putin is expected to participate in the Italian-Russian Civil Society Dialogue Forum at the Foreign Ministry, attended by Italian and Russian business and cultural representatives. The Russian delegation’s visit – which includes the Minister of Foreign Affairs, Sergey Lavrov, and the Minister of Industry, Denis Manturov – wraps up tonight with a working dinner at Villa Madama offered by Prime Minister Conte, together with other members of the Italian government, including the vice-premiers, Matteo Salvini and Luigi Di Maio, and Italy’s Foreign Minister Enzo Moavero Milanesi. Putin landed at Fiumicino airport aboard a 5 billion rubles (70 million euros) 96-300Pu Ilyushin. The presidential car, strictly “made in Russia”, had already arrived from Moscow: an Aurus – “gold of Russia” – Senat: almost six and a half meters long.