The members of the Permanent Synod and the Metropolitans of the Greek-Catholic Ukrainian Church will meet with Pope Francis in the Vatican next July 5-6. The Superiors of some Vatican Dycasteries will also be present. The purpose of the meeting is to prepare a “roadmap for the future” of the Country. After the Maidan Revolution of 2014 Ukraine is now struggling with a conflict in the Donbas Region, massive migration, both within and outside the country, and the "occupation" in Crimea. The state of the relations between Churches remains difficult since past January, when Ecumenical Patriarch Bartholomew signed the Tomos in Istanbul which grants autocephaly to the Ukrainian Orthodox Church, thus detaching it from Moscow’s Patriarchate.

To jointly develop a strategy for the future of Ukraine at a crucial time in the life of the country. On these grounds, Pope Francis summoned the members of the Permanent Synod and the Metropolitans of the Ukrainian Greek Catholic Church to Rome. The meeting will be held in the Vatican on 5 and 6 July, strictly behind closed doors. The Superiors of some Dycasteries will also attend the meeting. These include Cardinal Kurt Koch, President of the Pontifical Council for Christian Unity, and Cardinal Peter Kodwo Turckson, Prefect of the Dycastery for Promoting Integral Human Development. During the two day-gathering, Pope Francis will hear what the Metropolitans and the members of the Permanent Synod will say on matters pertaining to the life of the country and the Church in Ukraine and abroad. In announcing the news in a press release at the beginning of May, Major Archbishop His Beatitude Sviatoslav Shevchuk presented the meeting as “good news for the Ukrainian Greek Catholic Church and for the whole of Ukraine.” It is “the highest level of attention shown by the Holy See, with an unprecedented meeting that forms part of the Vatican Curia’s internal procedures when it comes to identifying the best mode of action in particular circumstances, events or situations.” What is the face of Ukraine today? Which challenges is it confronted with? What is the state of the relations between the Churches present on its territory? At first glance, Ukraine appears to be a rapidly-changing country. In the last few years it underwent transformations that affected almost all areas of society, both civil and religious. But the image of Ukraine is also one of occupation and war, the first in Crimea and Donbass.

The “Euromaidan” revolution and Crimea. In the past 28 years Ukraine experienced three upheavals: the Student Revolution of 1990, the Orange Revolution of 2004 and the “EuroMaidan” Revolution which broke out in 2013.

It was the name of Kiev’s main square, where the population took to the streets for months in a peaceful protest against the regime of the then President Yanukovich and the European dream. The annexation of Crimea to Russia began in those same days, just as the country was wiping away tears for the victims killed during the Maidan protest. It happened paradoxically in 2014, during the commemorations marking the 70th anniversary of the genocidal deportation by Stalin’s regime of Crimean Tatars – the indigenous population of the peninsula. Severe human rights violations are being reported in the region today, including restrictions on Ukrainian Orthodox, Greek-Catholics and Catholics in carrying out their pastoral service, along with the persecution of pro-Ukrainian activists. Figures released by the Social Affairs Ministry show that 39,053 citizens of the Autonomous Republic of Crimea and Sevastopol were registered as internally displaced persons in Ukraine as of 31 May 2019 is, 41.5% (16,238) of whom live in the Kiev region. 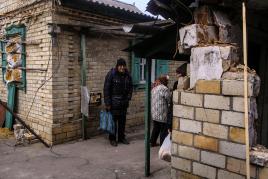 The situation in the occupied territories of the Donetsk and Luhansk Regions is even more dramatic. According to the latest Report of the UN Human Rights Monitoring Mission in Ukraine, since 2014 some 13,000 people were killed in Donbas hostilities, about 30 thousand people were injured and wounded. It left 400 thousand war “veterans” with over a thousand young people who committed suicide as a result of the trauma caused by the conflict.

This war has been “forgotten” by Europe, it’s a hybrid war marked by false news and lack of clarity, with tragic consequences. It is estimated that 5.2 million people were adversely affected by the hostilities of the armed conflict, 3.5 million of whom necessitate humanitarian assistance and protection.

The most needy and vulnerable persons (a population of some 2.7 million people) live in the 427-km “contact line” – or “grey zone” – which runs through Donetsk and Luhansk. Despite the ceasefire and the Minsk agreements, this area remains a battleground. Food and water safety, landmine contamination and explosive remnants of war; mental health and continuing severe stress; ruined and damaged infrastructures: these are the most serious problems faced by the population. It is estimated that at least 50,000 residential buildings along the contact line have been damaged as a result of the conflict. The offensive caused a massive displacement of people, a veritable exodus. Ukraine alone has taken in approximately two million refugees from the occupied territories in the last five years.

The support of Caritas and of Pope Francis. Caritas Ukraine (in conjunction with other European Caritas centres) has been providing humanitarian assistance to people most hit by the conflict, when the mass displacement of persons broke out in Ukraine. Since then Caritas has offered assistance to 560 thousand people. Also Pope Francis wanted to give a concrete token of solidarity and closeness to the Ukrainian population afflicted by the conflict.

The “Pope for Ukraine” project, launched in 2016, collected over 16 million euros in over two years – the result of a collection carried out in all the dioceses of Europe and of a personal donation by the Holy Father.

It reached about 900,000 beneficiaries, throughout the area of military operations and neighbouring territories, as well as in areas with the most migrants (Kharkiv, Dnipropetrovsk, Zaporizhia, the region and the city of Kiev).

The Churches. In the past years Ukraine also witnessed a very bitter clash involving the Orthodox Churches, sign of a land with a constantly changing history. On 5 January of this year in the Patriarchal Church of St George in Istanbul, the Ecumenical Patriarch Bartholomew signed the Tomos that granted autocephaly to the Ukrainian Orthodox Church. It represented the final stage of a long and painful process of “autonomy” that resulted in the constitution of a new Church with a new metropolitan and the consequent detachment from the Patriarchate of Moscow. The Russian Church reacted very harshly and decided to sever the “Eucharistic communion” with the Ecumenical Patriarchate of Constantinople. This is probably the most disruptive event in the life of the Churches in Ukraine. The Catholic Church – both in Rome and in Ukraine – followed the entire process with pain and with full respect for both parties and non-interference. In an interview with Tv2000, His Beatitude Shevchuk said:

“When we see two local churches clash, this is cause for sorrow… Obviously we love our Orthodox brothers, both in Moscow and in Constantinople and we will always try to be good brothers with everyone.”