The embrace with the Great Imam of al-Azhar, the signing of a common statement and a watchword: "Fraternity" sum-up the 27th apostolic journey of Pope Francis, the first Pontiff to visit the Arabian peninsula and the first to celebrate an outdoor mass for a small, but polyphonic, flock: one million Catholics, amounting to 10% of the inhabitants. In Zayed Sports City, in front of an audience of 135,000 Catholics and 4,000 Muslims, the Pope asked this population of migrants to live the spirit of the Beatitudes

The Pope and the Great Imam entering together hand in hand, reciting their respective speeches, and signing a common declaration on human fraternity for world peace and common coexistence, and blessing – always remaining together, as in all the stages of the journey – the first stone of a church and a mosque that will be erected side-by side on the same site: this is the snapshot, already consigned to history, of the first-ever visit of a Pontiff in the Arabian peninsula. Eight hundred years after the meeting with the Sultan, the first Pope in history to choose to bear the name of Francis rekindles what John Paul II, whom Bergoglio himself proclaimed saint, had defined in 1986 the “spirit of Assisi”. From the United Arab Emirates, the destination of his 27th apostolic journey, Pope Francis sends a message of dialogue, peace and reconciliation “as a believer thirsting for peace, as a brother seeking peace with the brethren” with a clear watchword: “fraternity”, like that testified by the population of migrants whom the Pope honored in the first outdoor Mass ever celebrated in the Arabic peninsula, giving them the beatitudes, which are not for supermen but help keep the heart, and the world, clean.
“Today, we too in the name of God, in order to safeguard peace, need to enter together as one family into an ark which can sail the stormy seas of the world: the ark of fraternity”.These are the opening words of the Pope’s speech at the Founder’s Memorial, in front of an audience of 700 leaders of different religious faiths.

“No violence can be justified in the name of religion”,

Francis stated, warning against taking the name of God to justify hate and violence.
“To commit ourselves to the equal dignity of all, so that religious freedom may not be threatened”,is the appeal to combat extremism and hate, highlighting one of the words that characterize the United Arab Emirates: tolerance, the chosen theme for 2019. Above all, an appeal to coherence:
“We cannot truly call on God, the Father of all if we refuse to treat in a brotherly way any man, created as he is in the image of God. We cannot proclaim fraternity and then act in the opposite way”.The “courage of otherness” is the soul of dialogue:

“There is no alternative: we will either build the future together or there will not be a future”. 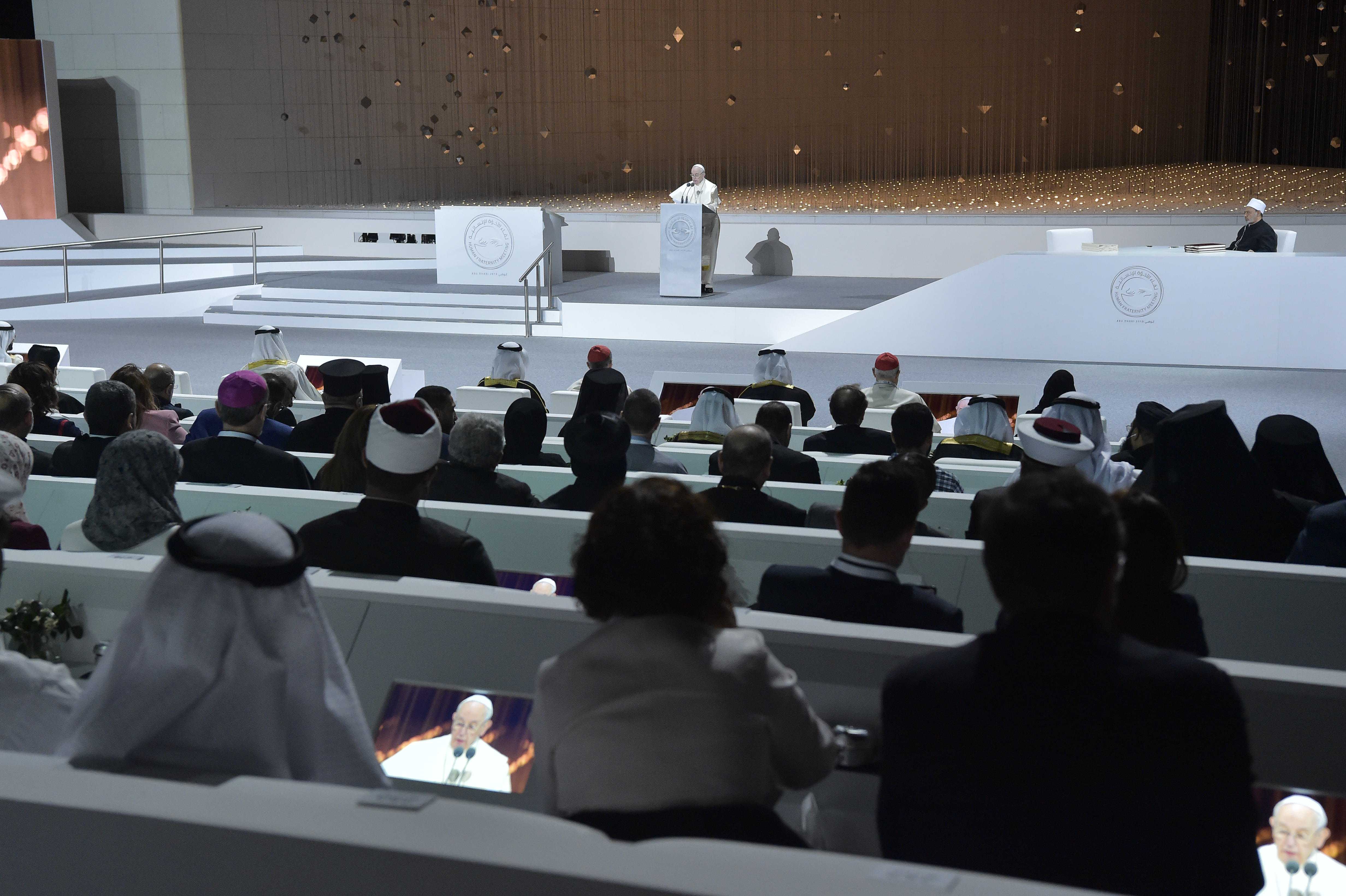 Religions do not incite violence or terrorism; instead, they are committed to the dignity of all, to reconciliation and to “demilitarizing the human heart”, summarizes Francis. “Respect, tolerance, fraternal coexistence, human development”, are the ingredients that promote a culture of peace, which requires investing on the young, to form “open identities” which do not fall for negative messages and fake news”.
“A fraternal living together, founded on education and justice; a human development built upon a welcoming inclusion and on the rights of all”:for the Pope, “these are the seeds of peace which the world’s religions are called to help flourish. For them, perhaps as never before, in this delicate historical situation, it is a task that can no longer be postponed: to contribute actively to demilitarizing the human heart”.

“Human fraternity requires of us, as representatives of the world’s religions, the duty to reject every nuance of approval from the word “war””,

is the appeal to the religious leaders in attendance, to whom Francis submitted the dramatic situation in Yemen, Syria, Iraq and Libya: “Together, as brothers and sisters in the one human family willed by God, let us commit ourselves against the logic of armed power, against the monetization of relations, the arming of borders, the raising of walls, the gagging of the poor”. 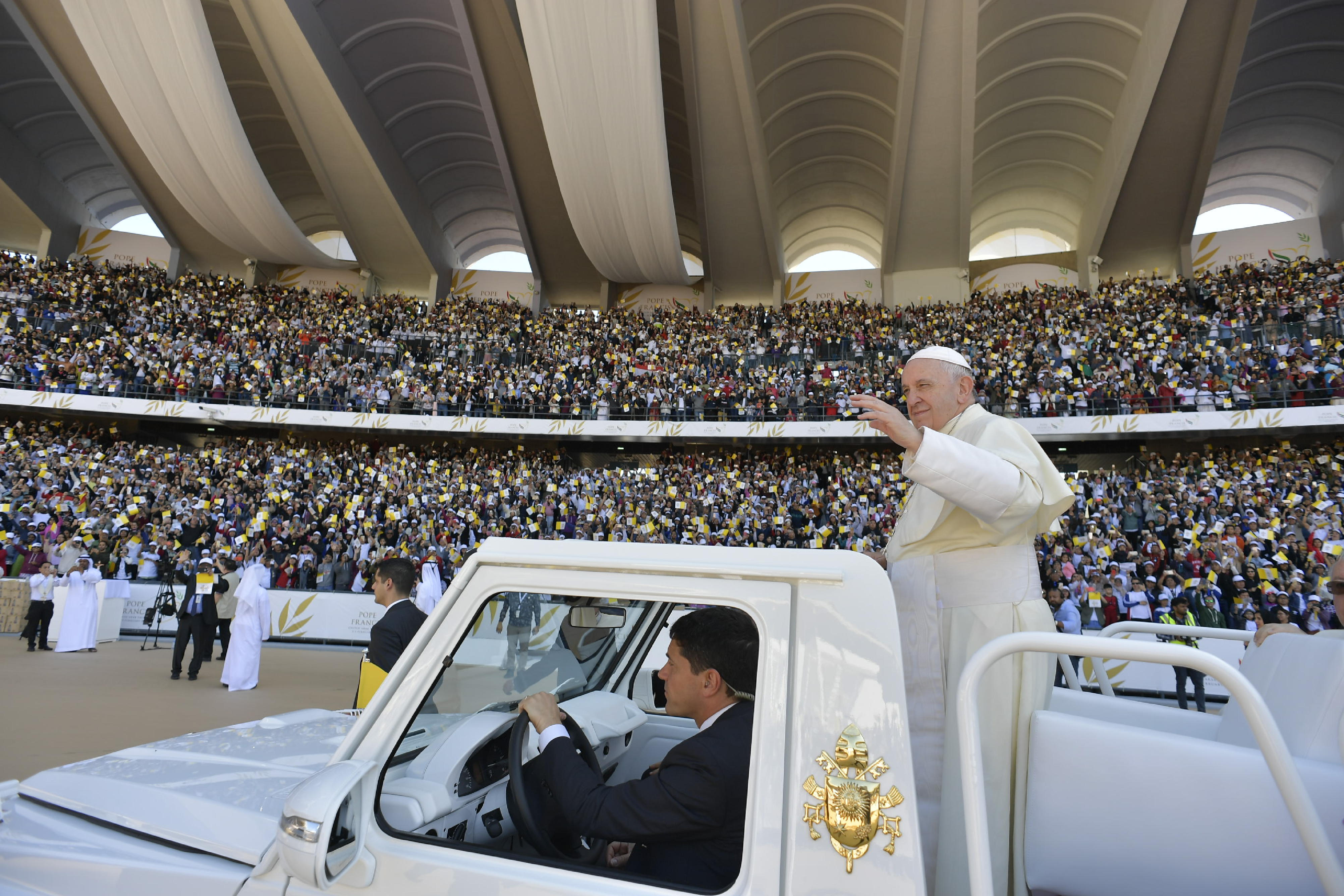 “Here, in the desert, a way of fruitful development has been opened which, beginning from the creation of jobs, offers hope to many persons from a variety of nations, cultures, and beliefs”,affirmed Francis in his portrayal of the United Arab Emirates as a people of migrants, especially from Asia and the Philippines, who have come to this land to find a means of subsistence. It is this people, represented in the Mass in Zayed Sports City by 135,000 catholics from over 200 different countries, as well as 4,000 Muslims, whom the Pope thus honored:
“You are a choir composed of numerous nations, languages and rites. This joyful polyphony of faith is a witness that you give everyone and that builds up the Church”.Addressing the Catholics in attendance, mostly from Asia and the Philippines and who make up 10% of the population, the Pope continued: “It is most certainly not easy for you to live far from home, missing the affection of your loved ones, and perhaps also feeling uncertainty about the future”. The precept is to live out the beatitudes, which “are not for supermen, but for those who face up to the challenges and trials of each day”. “They do no require dramatic gestures” but help to “keep our hearts pure”: “Those who live them out according to Jesus are able to cleanse the world”.
“May your communities be oases of peace”, is Francis’ parting message: “The Christian promotes peace, starting with the community where he or she lives”.Among the communities which Jesus addresses in the Book of Apocalypse there is that of Filadelfia, which for the Pope resembles the small, but polyphonic flock of the United Arab Emirates, which is able to forge ahead an persevere in the face of difficulties. The secret? “Fraternal love”, the very name of the city. For that kind of fraternity, “there are no first and second class Christians”.