From Panama, isthmus-city between two Oceans, a “hub” of hope, Pope Francis encourages young people to be the initiators of “a new Pentecost” for the Church and for the world, absorbing the vivifying the experience of the Synod and embarking on the journey towards Lisbon, where the 37th WYD will be held in 2022

Four embraces extended to young people; three recurring words: love, passion, concreteness, to fulfil together the shared dream called Jesus. This, in a nutshell was the WYD in Panama, where Francis called upon the young to acknowledge his call: “You are not the tomorrow, you are the now of God.” Mary is the role model. She is the greatest “influencer” in history whose concrete reality prevails over the often delusional and misleading digital realm. The Pope also takes the example of model Saint Oscar Arnulfo Romero, his “thinking with the Church” is a compass to bear Christian witness before worldly challenges. From the isthmus-city located between two Oceans, described as a “hub” of hope, Pope Francis encourages young people to be the initiators of “a new Pentecost” for the Church and for the world, absorbing the vivifying the experience of the Synod and embarking on the journey towards Lisbon, where the 37th WYD will be held in 2022.

The Mass at the Metro Park was an opportunity for the fourth, last embrace with the young for the WYD in Panama (they numbered approximately 700 thousand) – as in the first embrace on the occasion of the opening ceremony – the Pope traced the ‘fil rouge’ linking the Synod on Young People and the WYD that he strongly wanted to be held in this small, strategic periphery that acts as a linkage between the two Americas. “The enrichment of intergenerational dialogue, the enrichment of exchange and the value of realizing that we need one another, that we have to work to create channels and spaces that encourage dreaming of and working for tomorrow, starting today”, this is Francis’ message that young people and the Church, side by side, are called to cherish “not in isolation, but rather side by side, creating a common space.  A space that is not simply taken for granted, or won in a lottery, but a space for which you too must fight.” 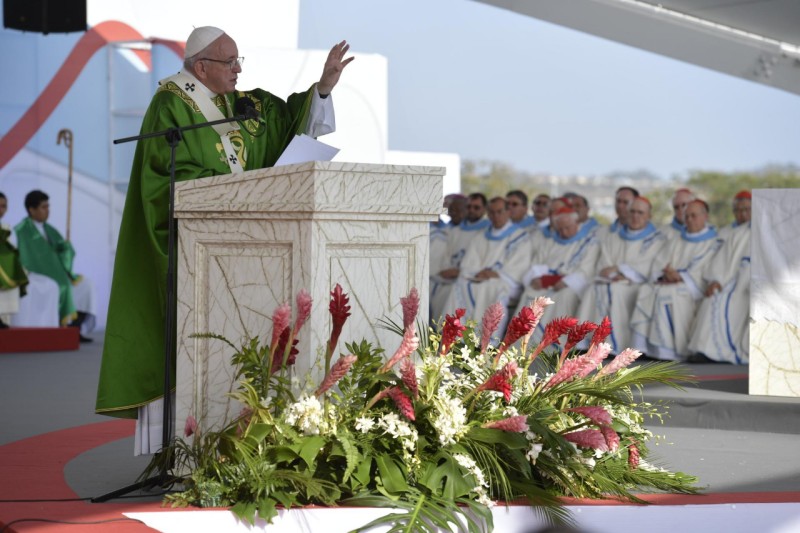 “You, dear young people, are not the future but the now of God”,

the appeal of the Pope: “He invites you and calls you in your communities and cities to go out and find your grandparents, your elders; to stand up and with them to speak out and realize the dream that the Lord has dreamed for you. Not tomorrow but now.” “Realize that you have a mission and fall in love, that will decide everything”, is the exhortation to the young. “We may possess everything, but if we lack the passion of love, we will have nothing. Let us allow the Lord to make us fall in love!”. 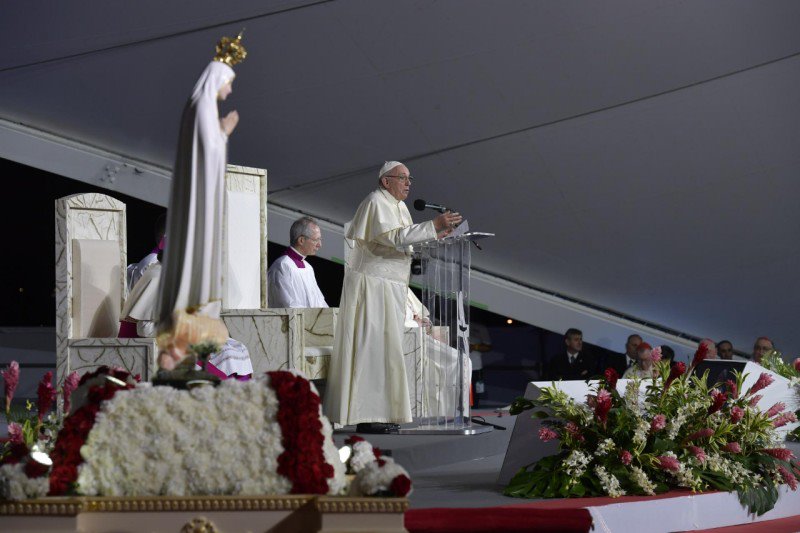 “God is real because love is real; God is concrete because love is concrete”, Francis said, calling upon young people to say “yes” to a new Pentecost for the world and for the Church.” Not tomorrow but now. “For Jesus there is no ‘meantime’: in that “meantime” in that dreams lose their buoyancy and become “flat and dreary”, petty and plaintive.

“Without work, without education, without community, without family”: these “four withouts” leave our life “rootless.”

The Pope lists them answering the questions of young people during the Vigil at Metro Park: “Without education, it is difficult to dream of a future; without work, it is very difficult to dream of a future; without a family and community, it is almost impossible to dream of a future.  Because dreaming of a future means learning how to answer not only the question what I am living for, but also who I am living for, who makes it worthwhile for me to live my life.” Reiterating the words of his first day in Panama, the Pope underlined the primacy of reality – of which Mary is the most influential witness – over the virtual world.

“It is not enough to be connected all day long.  To feel respected and asked to get involved is greater than simply being on-line.” 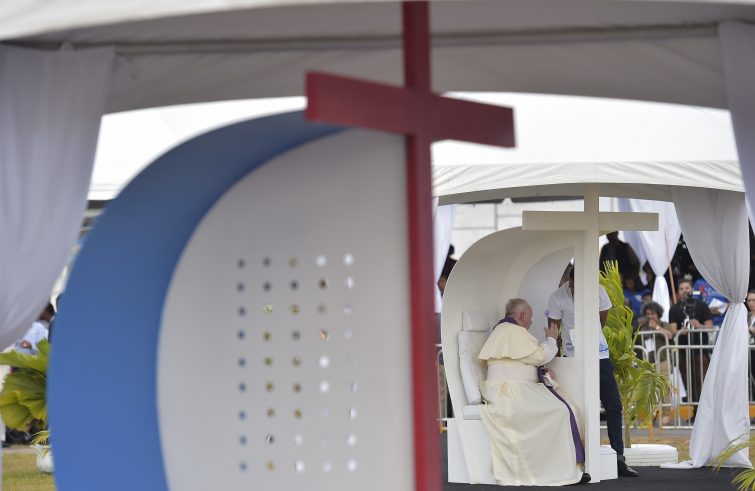 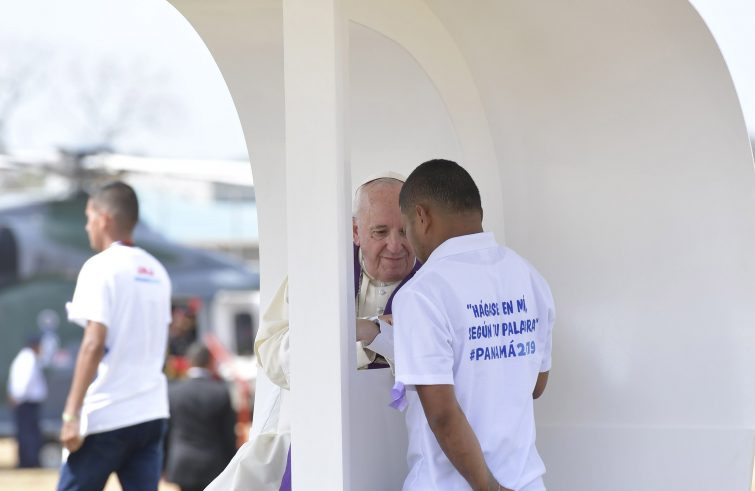 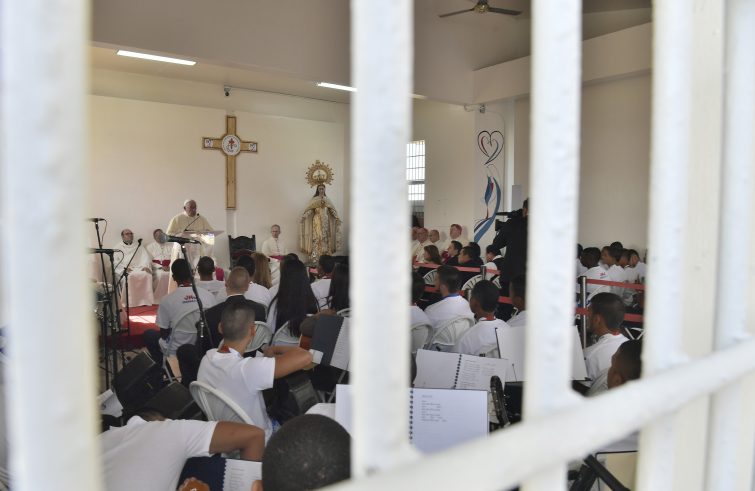 “Embrace life as it comes”, the Pope told youths, invitation: including the disabled and those in prison. The Pope set the example in his “first two times” of the WYD with the visit to juvenile detention centre of Pecora where he celebrated with the penitential liturgy with young detainees along with the visit at the Casa Hogar del Buen Samaritano after the Mass of the last day, to be near 60 young people in difficulty, including a number of people with AIDS, a veritable scourge in this area in Central America. In the Via Crucis at the Campo San Juan Pablo II, Panama City’s urban park that bears the name of the creator of the WYD, Francis recited a powerful, intense prayer in which he reminded us that Jesus’s path to Calvary continues in all the suffering in the world: from abortion to femicide, from violence to abuse, from bullying to
“unscrupulous people – including people who claim to be serving you, Lord – snares of exploitation, criminal activity, and abuse which feed on their lives.” 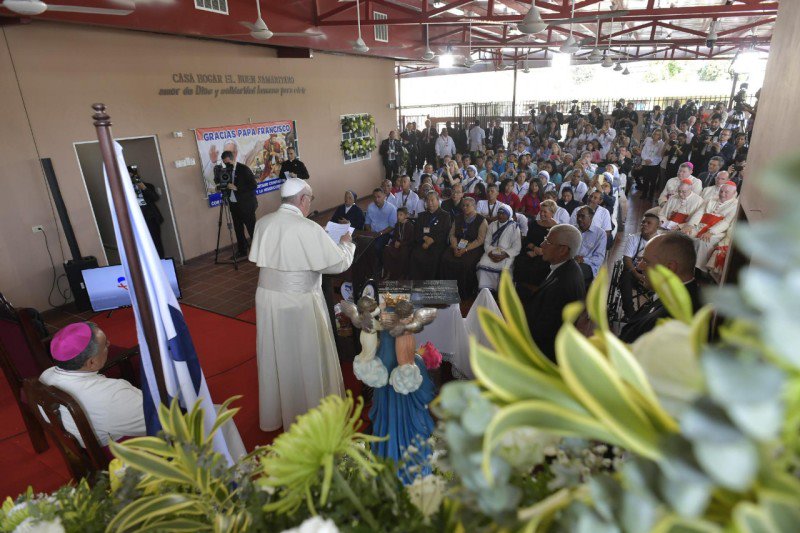 “Each of us is much more than our labels”, the Pope told young detainees at the Juvenile detention centre in Pacora, an excellent example of inclusion, rehabilitation and integration: ” A community grows sick when it is unable to rejoice for the transformation of its offspring, a community grows sick when it lives off relentless, negative and heartless complaining.” This brings back to mind the words delivered in Peter’s first embrace to the young people in Panama:<http://w2.vatican.va/content/francesco/it/events/event.dir.html/content/vaticanevents/it/2019/1/24/apertura-gmg-panama.html> “Be true teachers and builders of the culture of encounter.” Once again, as in the Synod, young people take the floor. The adult world is called to learn from them, for “truly humane politics” that rejects corruption and to welcome, promote, protect and integrate migrants, many of whom have a young face.