From the Cinta Costera, the Pope told young people: "Be true teachers and builders of the culture of encounter." In his address to authorities the Pope called for the rejection of corruption and invited politicians to “live in simplicity and transparency.” “Snatch them from the streets”, he said to Bishops with reference to the young. Domestic violence, the killing of women, armed gangs and criminals, drug trafficking, the sexual exploitation of minors and young people. “Many migrants have young faces”, the Pope underlined, along with the four imperatives linked to the migratory question: "To welcome, to promote, to protect and to integrate.” “Thinking with the Church”, along with Saint Oscar Romero, who was neither “an ideologue nor ideological”

“With you, we want to rediscover and reawaken the Church’s constant freshness and youth, opening ourselves to a new Pentecost.” The Pope thus traced the “fil rouge” linking the Synod on Young People to the WYD in Panama, exemplifying what Francis previously described as the “revolution of service” in his video message for the event that today brought together in Panama 250 thousand young people from 150 world Countries, gathered at the Campo Santa Maria Antigua della Cinta Costera. Francis describes young people as “true teachers and builders of the culture of encounter”, an appeal and a call “to dare to keep alive a shared dream named Jesus”, for “Christianity is not a collection of truths to be believed, of rules to be followed, or of prohibitions”, the Pope said echoing the words of Oscar Arnulfo Romero, canonized three months ago, the true beacon of this WYD present in the Pope’s first public speeches. Christianity, Francis said, “is pursuing the dream for which He gave his life: loving with the same love with which he loved us.” “Do you believe in this love?” the Pope said, turning directly to the youths. The final hope expressed in Cinta Costera, is for “Panama to be today not only a channel that joins oceans, but also a channel where God’s dream continues to find new streams that enable it to grow, to multiply and to spread to every corner of the earth.” 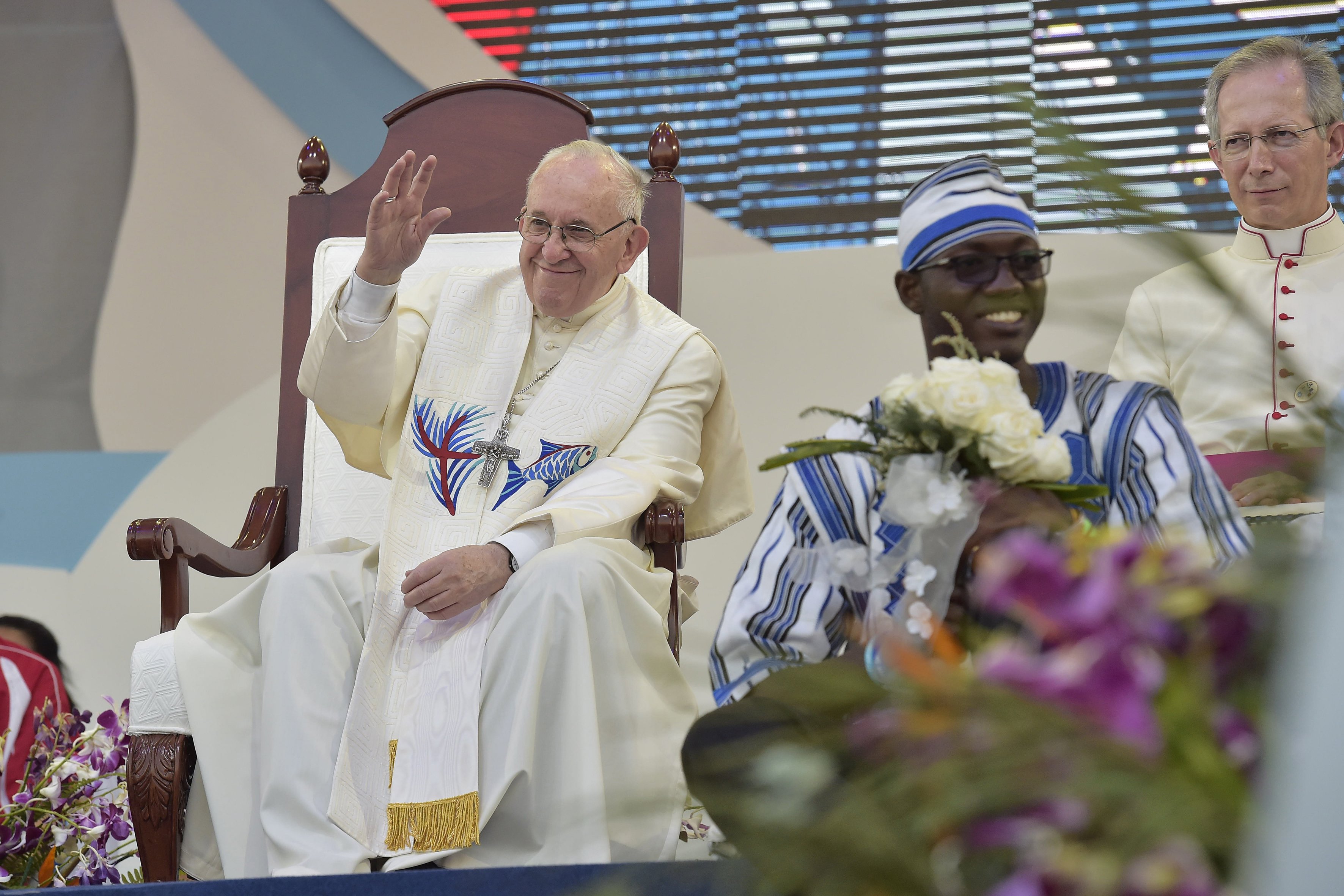 “Thank you for having opened to us the doors of your home”, with this token the Pope began his first speech of January 24 to Panama’s in Palacio de las Garzas, immediately after the welcoming ceremony in the Presidential Palace and the courtesy visit to the President of the Republic of Panama Juan Carlos Varela Rodriguez. “Thanks to its privileged location, your country is a strategic enclave not only for the region but also for the entire world”, Francis’ homage:
“A bridge between oceans and a natural land of encounter” , Panama, is a “hub of hope”, as “the right to the future is also a human right”: the young Panama defies  “short-sighted and short-term views” to open “new channels of humanity that foster commitment and break through anonymity and isolation, for the sake of a new way of building history.” 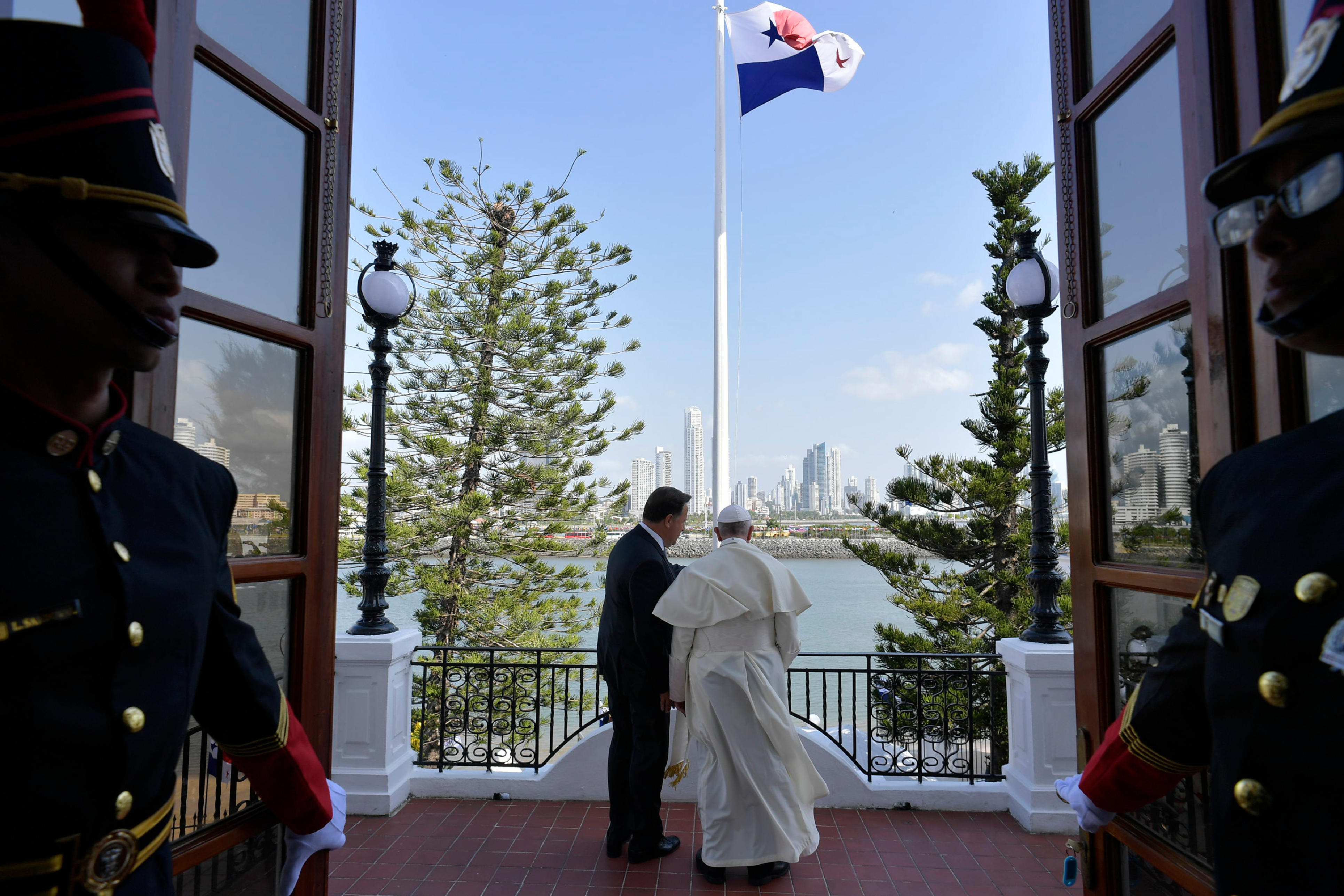 Guaranteeing “access to quality education and the promotion of dignified jobs” is the preliminary condition, the Pope said in his first appeal, to ensure that all have the opportunity to feel that they are agents of their own destiny, starting with the “richness of the indigenous peoples”, that Francis names one by one and mentions in each of his first three speeches: Bribri, Buglé, Emberá, Kuna, Nasoteribe, Ngäbe and Waunanaa.

“Live in simplicity and transparency, with a clear sense of responsibility for others and for our world”,

is the message to the Country’s political leadership: “to lead a life that demonstrates that public service is a synonym of honesty and justice, and opposed to all forms of corruption.” This requires “a commitment in which all – beginning with those of us who call ourselves Christians – have the audacity to build an authentically human politics” by means of “a culture of greater transparency between governments, the private sector and the entire population.”

“Snatch them from the streets before the culture of death can entice their young minds and sell them its smoke and mirrors”,

is the Pope’s appeal to bishops, to whom is addressed the second speech in the Church of Saint Francis of Assisi: “Do so not paternalistically, looking down from on high.” Domestic violence, the killing of women, armed gangs and criminals, drug trafficking, the sexual exploitation of minors and young people: Francis is well-aware of the threats that jeopardise the lives of the young, at the root of which “is the experience of being orphaned, the fruit of a culture and a society run amok”, leaving young people “without a home, without a family, without a community, without a sense of belonging, easy prey to the first charlatan who comes along” 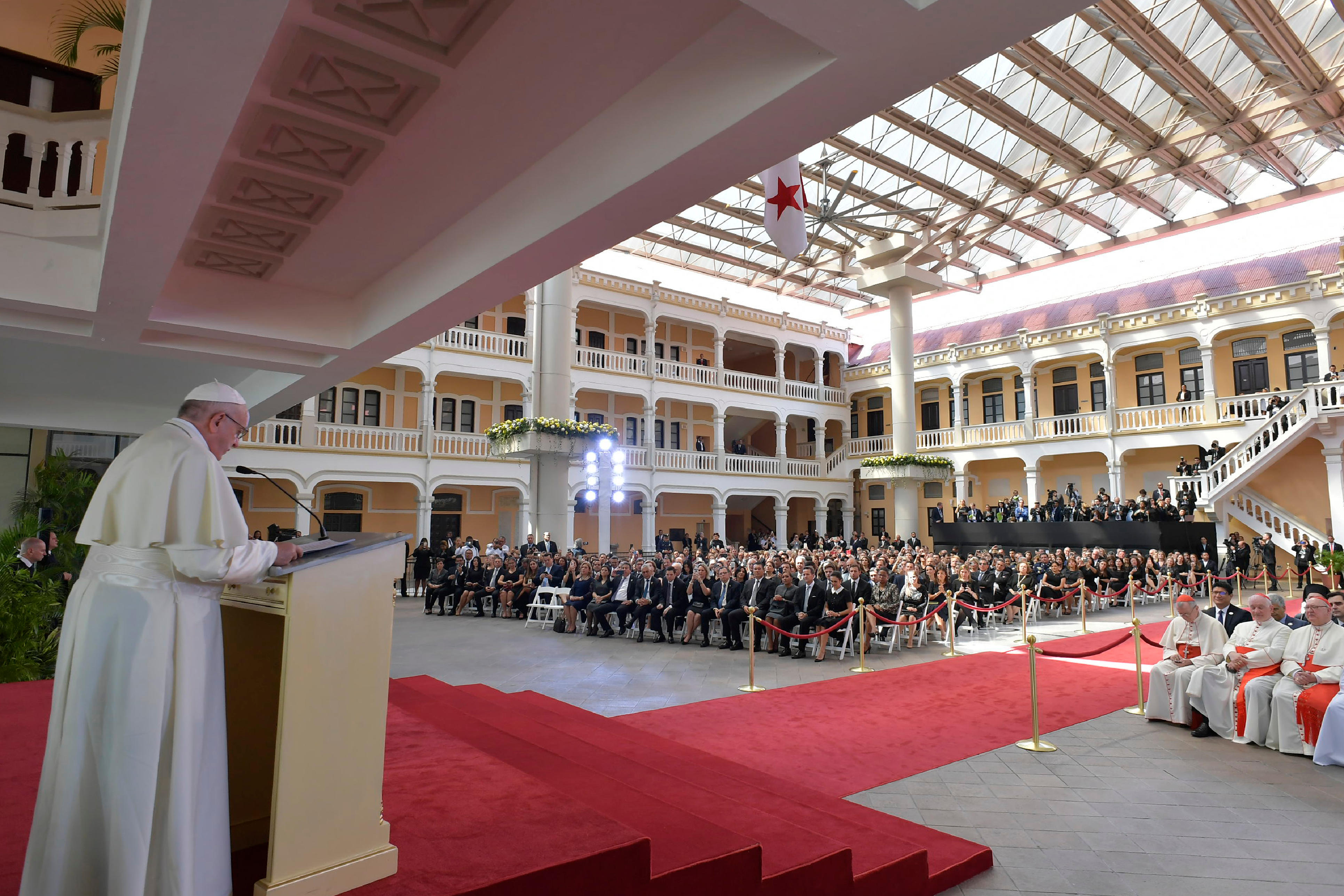 The Pope then went on to address the issue of forced migration:

” Many migrants have young faces;

they are seeking a better life for their families. Nor are they afraid to take risks and to leave everything behind in order to offer them the minimum conditions for a better future.” “Realizing this is not enough”, the Pope said; ” The Church, by virtue of her universality, can provide the fraternal hospitality and acceptance that can enable the communities of origin and of destination to dialogue and to help overcome fears and suspicions, and thus to consolidate the very bonds that migrations – in the collective imagination – threaten to break”, the four imperatives, reiterated on many occasions in the past years. “We cannot remain indifferent”, the appeal: “we must constantly ask ourselves, Where do we wish to stand?” 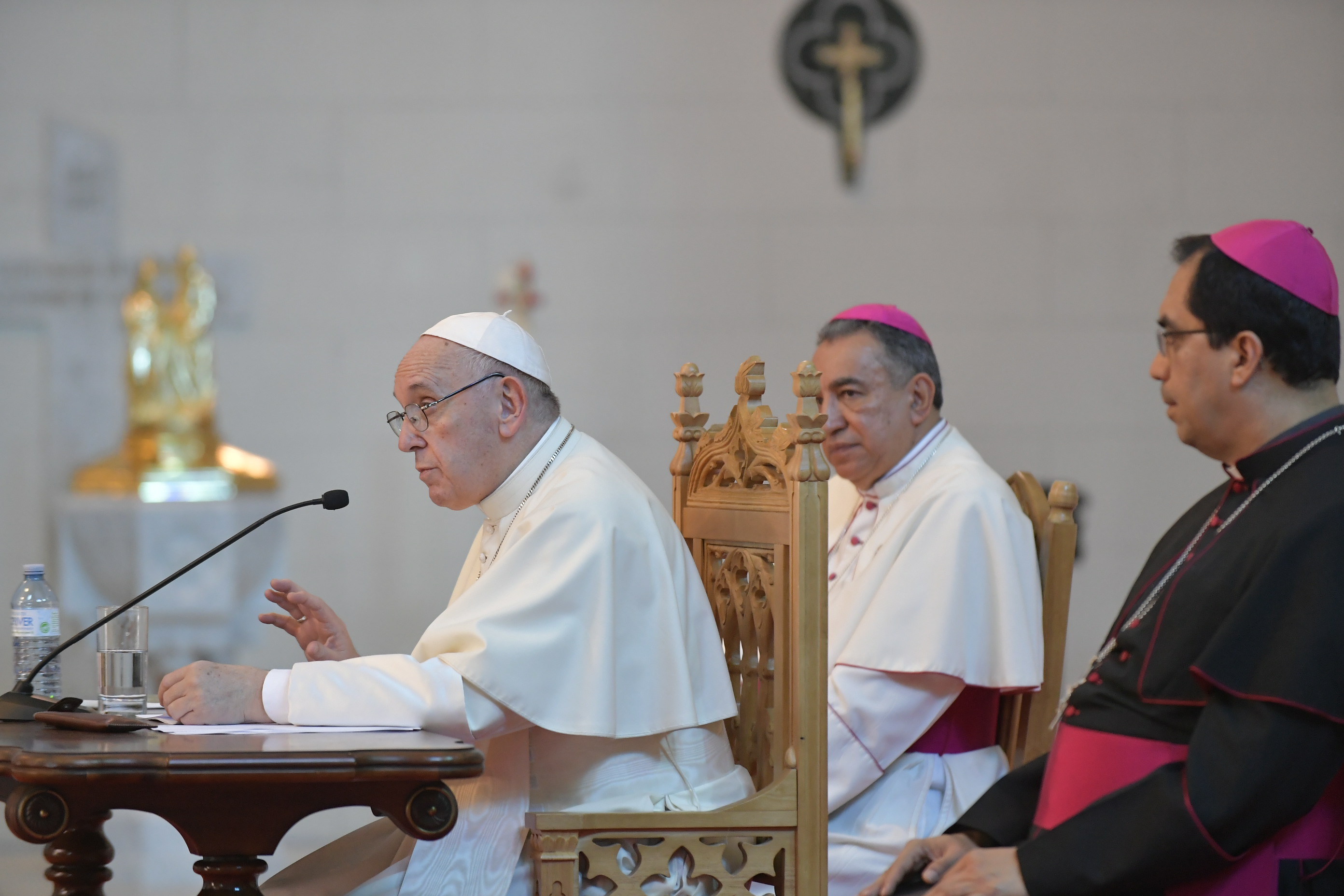 “Thinking with the Church”, along with Saint Oscar Arnulfo Romero.

It’s the central invitation addressed to SEDAC bishops. ” We did not invent the Church; she was not born with us and she will carry on without us”, the Pope said with regard to martyrdom, that has nothing to do with faintheartedness. “Romero thought with the Church, because before all else he loved the Church as a mother who had brought him to birth in the faith. He felt a member and a part of her”, “He was neither an ideologue nor ideological”, Francis said. His lesson to us is that the pastor “must learn to listen to the heartbeat of his people. He must smell the odour of the sheep, the men and women of today, until he is steeped in their joys and hopes, their sorrows and their anxieties”, overcoming any type of false dichotomy or antagonism. To touch the wounds of our people, which are our wounds too: “Networks help to build relationships, but not roots; they are incapable of giving us a sense of belonging, of making us feel part of a single people”, the exhortation that prioritizes concrete reality over virtual reality, compassion over sensationalism. 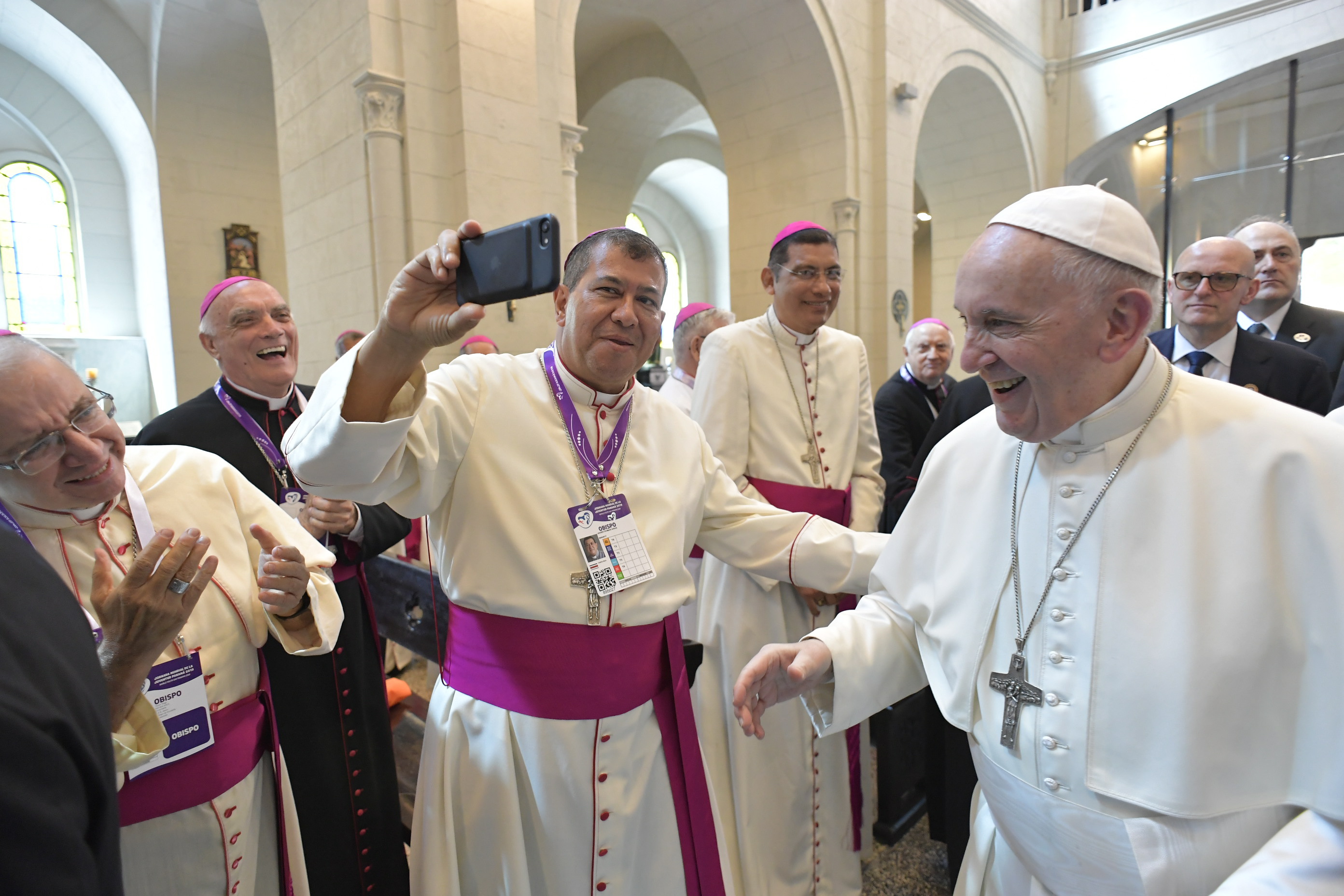