Pope Francis opened the Synod with a homily centered on two verbs – to hope and to dream – “to look directly into the eyes of young people", without being crushed “by the prophets of doom”, or by the “mistakes and sins” committed also by sons of the Church. Say “no” to “self-preservation and self-centredness”, allowing ourselves to be inspired by the prophetic gaze of Paul VI and his faith in young people, which the Church cannot leave “in the hands of so many pedlars of death.” In his opening address, that lasted over half-an-hour, met with a heartfelt applause, the Pope thanked youths and encouraged cross-generational dialogue, leaving behind stereotypes and prejudice. The outcome of the Synod “is not merely a document.”

Two verbs: to hope and to dream, and the related nouns. A preliminary recommendation: not to be crushed “by the prophets of doom and misfortune, by our own shortcomings, mistakes and sins.” The goal is “to broaden our horizons, expand our hearts and transform those frames of mind that today paralyze, separate and alienate young people.” Pope Francis opened the XV Ordinary General Assembly of the Synod of Bishops, ongoing until October 28, on the theme: “Young People, the Faith and Vocational Discernment”, calling upon 267 synod Fathers who purposely convened from world countries – including continental China, Francis noted as he welcomed the newcomers – to support young people so as “not to leave them alone in the hands of so many pedlars of death.” For the Pope, the words of Paul VI –  who will be proclaimed Saint in Saint Peter’s Square next October 14 – delivered in the closing message of the Second Vatican Council, which was in fact addressed to the young, are the “Magna Charta” of the Synod. In his wide-ranging speech that lasted over thirty minutes,  that opened the first General Congregation, and that was welcomed with a heartfelt applause, the Holy Father expressed his “thanks” to the young and encouraged cross-generational dialogue, leaving behind prejudice and stereotyping. Young people “wish to be the protagonists of the present phase of renewal”, said Cardinal Lorenzo Baldisseri, Secretary General of the Synod, in his speech. The art of accompaniment “is the young people’s most requested skill”: they long for a “more authentic” Church. His words were echoed by the General Rapporteur Cardinal Sergio da Rocha. 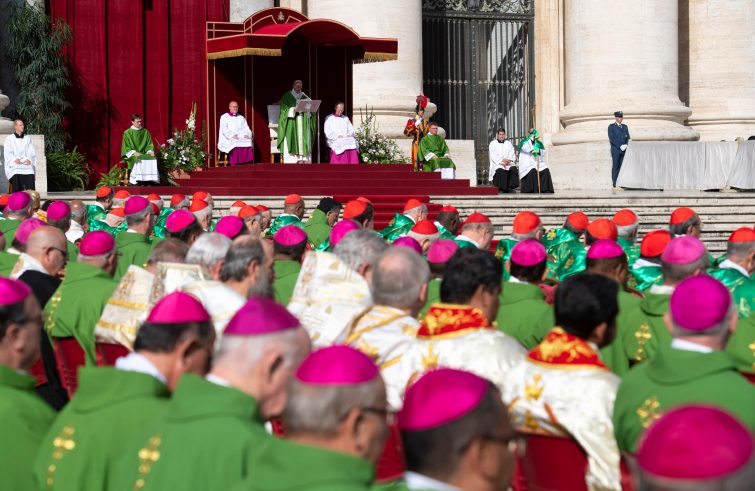 “May the Spirit grant us the grace to be synodal Fathers anointed with the gift of dreaming and of hoping. We will then, in turn, be able to anoint our young people with the gift of prophecy and vision; may the Spirit give us the grace to be a memory that is diligent, living and effective, that does not allow itself from one generation to the next to be extinguished or crushed by the prophets of doom and misfortune, by our own shortcomings, mistakes and sins. Rather may it be a memory capable of enkindling our hearts and of discerning the ways of the Spirit.” This hope, expressed in the form of prayer, opened Francis’ homily in Saint Peter’s Square. The Pope went on to clarify the program of his third Synod, after the previous two dedicated to the family:

“Hope challenges us, moves us and shatters that conformism which says, ‘it’s always been done like this’. Hope asks us to get up and look directly into the eyes of young people and see their situations. This same hope asks us to make efforts to reverse situations of uncertainty, exclusion and violence, to which our young people are exposed. Having been formed by so many choices taken in the past, young people now call us to join them in facing the present with greater commitment and to work against whatever prevents their lives from growing in a dignified way. They ask us not to leave them alone in the hands of so many pedlars of death who oppress their lives and darken their vision.” 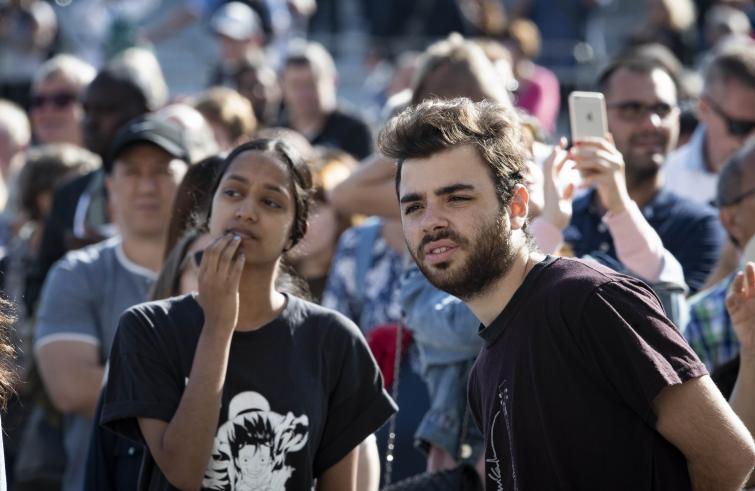 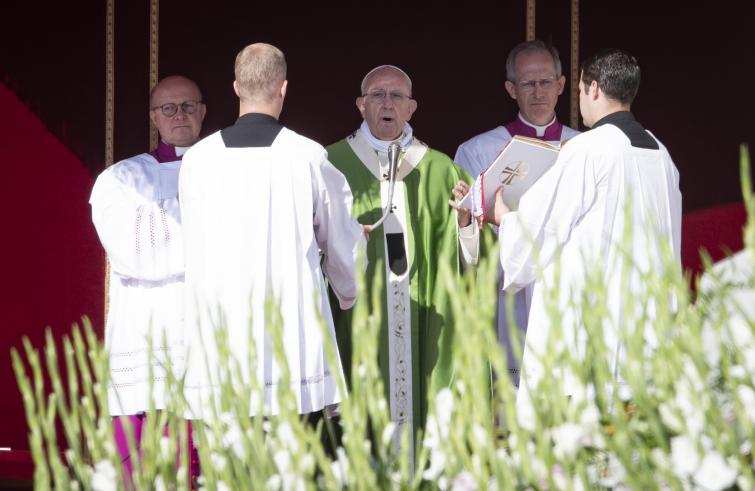 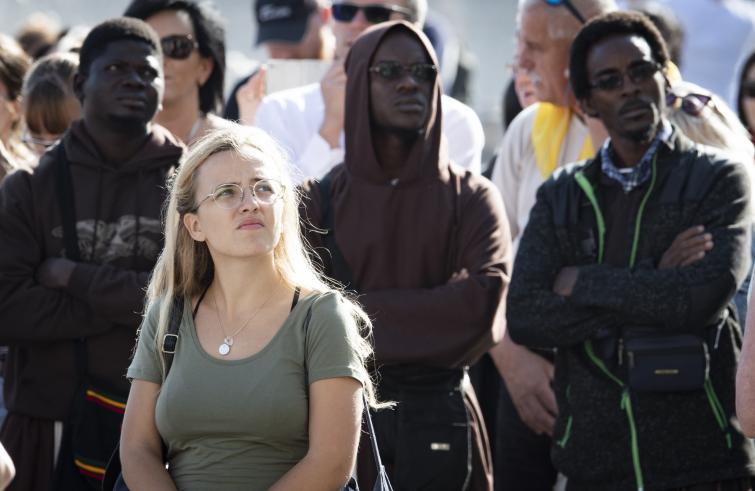 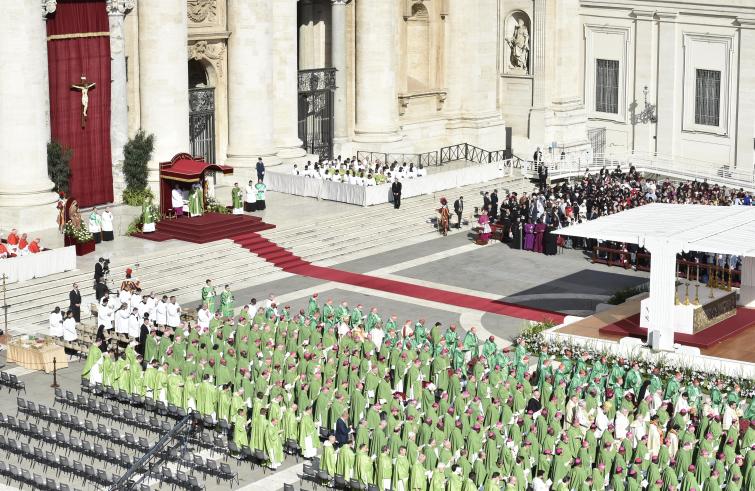 For Francis the Church is characterised by the “capacity to dream together”, without seeking self-interest. “To listen to one another”, the Pope said, requires us

not to give way to “a self-preservation and self-centredness

The first imperative verb, to listen: “Listening to God, so that with him we can listen to the cry of the people; listening to our people, so that we can breathe in with them the desire to which God calls us” Francis echoing his Address during the Prayer Vigil in preparation for the Synod on the Family. This disposition

“protects us from the temptation of falling into moralistic or elitist postures,

and it protects us from the lure of abstract ideologies that never touch the realities of our people.”

“May the man hold fast to what the child has promised.” The Pope quotes from German poet Hölderlin to revisit in our memories what the Council Fathers heard in their youth, as he did, during the Council. The last message, which Paul VI addressed to young people on December 8 1965, is the Pope’s final recommendation, almost an initiation into the works of the Synod, thereupon begun.

The first General Congregation opened “by saying thank you” to some thirty young people attending in person with the Synod Fathers and those across the globe, connected via the Internet, who decided “that is worth the effort to feel part of the Church or to enter into dialogue with her.”

Discernment “is not an advertising slogan”, or “a fad of this pontificate”, the Pope said referring to the theme of Synod. Then a proposal for the long working period: to observe “a moment of silence” of approximately three minutes, after five interventions are made.

A Church “that needs to listen” , including young people, must leave behind “prejudice and stereotypes” in the dialogue between generations. For the outcome of the Synod “is not merely a document”, the Pope said. The homily in Saint Peter’s square began with a quote from Paul VI’ last Council message. The first address in the Synod Hall ends with a quote from the first speech of John XXIII that opened Vatican II. Just like Francis, the late Pope had warned against the “prophets of doom”,  and to “spend time with the future”, keeping our gaze fixed on the good that “is neither a topic for blogs, nor front page news.”

And do not be afraid “before the wounds of Christ’s flesh, always inflicted by sin and often by the children of the Church.”