“We don’t seek unity as an end in itself. We want unity because we firmly believe that the Churches can give a credible contribution of unity at a time of fears, populism, xenophobia, conflicts and divisions, individualism. We want to show that our belonging to one another is good news for the world today.” Interview with Dr. Rev. Olav Fykse Tveit, Secretary General of the World Council of Churches, a few days after Pope Francis’ historical visit to the WCC seat in Geneva

“It was a beautiful day. It has been beautiful for me and for all the Churches. It showed that there is one ecumenical movement and it highlighted the firm commitment of the Catholic Church and of Pope Francis in the joint quest for unity”, said Rev. Olav Fykse Tveit, Secretary General of the World Council of Churches (WCC). A few days after Francis’ departure from Geneva, the presence of Pope Francis lingers on in the headquarters of the Ecumenical Council … a presence that left a mark. “Celebrating our 70th anniversary with Pope Francis has been a very powerful experience for the WCC, for the members of our Ecumenical Centre, for all the staff. It signalled a significant reaffirmation of the work carried out in the past years.” 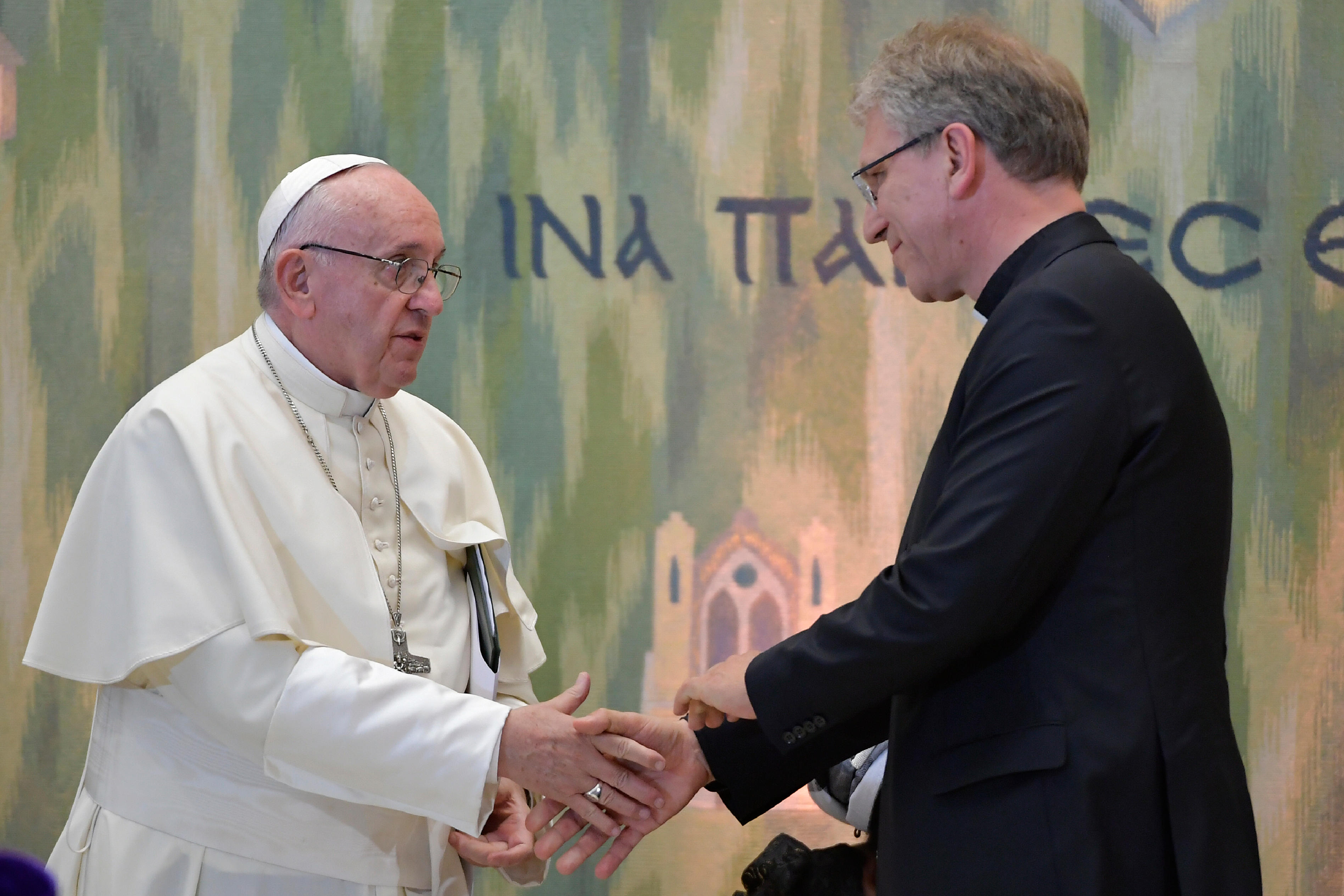 Rev. Tveit, what impressed you the most about Francis?

His strong personal commitment and his love for ecumenical relations. His strong appeal to honesty, and to a deep-rooted commitment in the quest for unity, was equally impressive. He also strongly encouraged us to view the call for unity as a calling and a common mission, that is, to jointly bear witness to the Gospel in the world. It’s a concept that is very dear to us and that has been at the centre of a conference recently held in Tanzania together with a delegation of the Catholic Church. We spoke at length about ways to transmit the Gospel in a secularised world. We have a common task. Pope Francis is aware of this and he follows this same direction.

He also told us that we will find unity as long as we proceed together, which reflects the belief our Churches.

Were you impressed by something in particular – a word, a gesture…-?

I think we were all impressed by the extent to which Pope Francis wanted this visit, and he expressed it in many ways. It was something he had at heart, namely, to express his commitment for Church unity. It was evident in his replies during our meetings, in his public speeches, as well as in personal conversations. I was also impressed by his strong yearning to support and encourage every initiative directed at spreading world peace, at the promotion of human rights, at defending the dignity of every human being. It was an historic event here, in Geneva, which attracted local and international press. The extent of media coverage is a sign of global interest towards everything Francis says and does, which also gave resonance to WCC activity worldwide. It was an opportunity to encourage our local Churches to step up their commitment for unity, justice, and peace, in their respective realms and it boosted our commitment to work together. 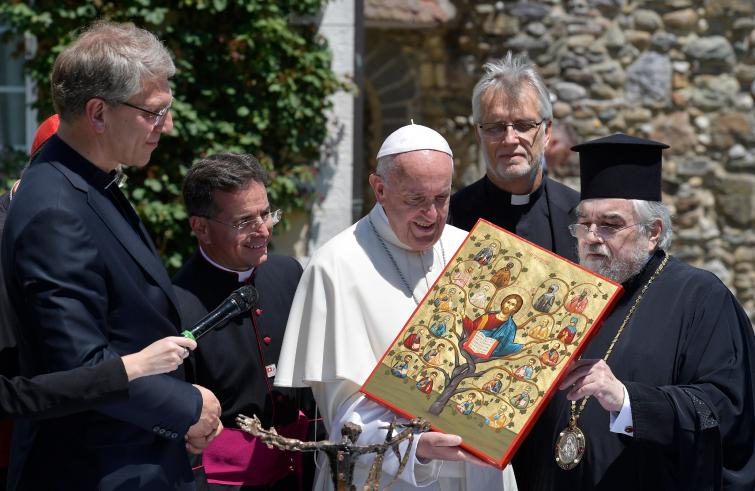 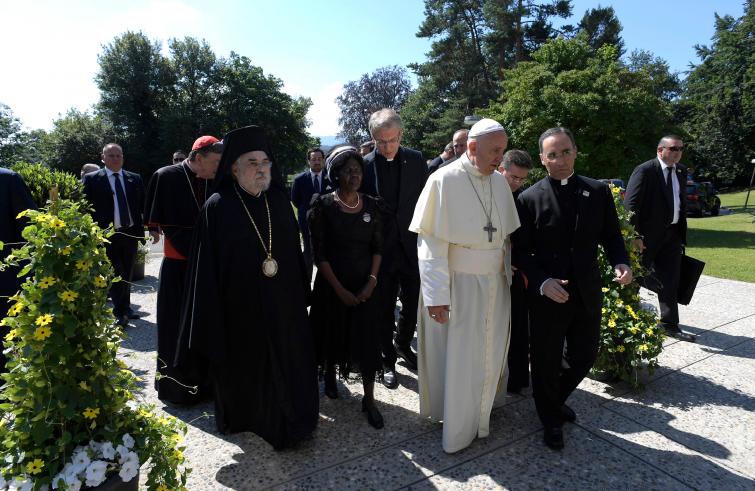 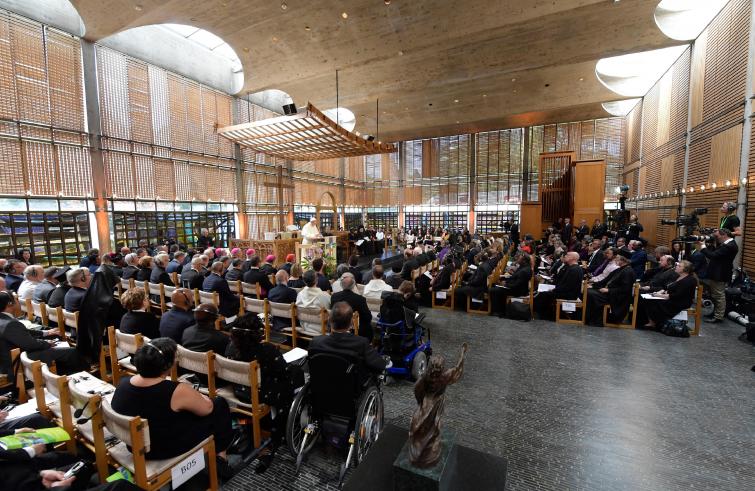 You described the visit as a milestone in the history of the ecumenical movement. You also said we will not stop here, we will continue. In which ways do you plan to continue this cooperation?

Indeed, it was a milestone we placed along our journey. This stone symbolizes the work done so far. We gave thanks to God and to those who preceded us, who made all of this possible today. The milestone also indicates the road that lies ahead, we have seen how important it is for the Churches to bring the Gospel to the world together, for only in unity can their message be credible. It’s important to understand that we have a lot to learn from each other, and that we need to go forth and embrace those who most need the support of our Churches. What we seek is not unity as an end in itself.

We want to be united because we firmly believe that the Churches can give a credible contribution of unity at a time of fears, populism, xenophobia, conflicts and division, individualism.

We want to show that our sense of belonging to one another is good news for the world today. 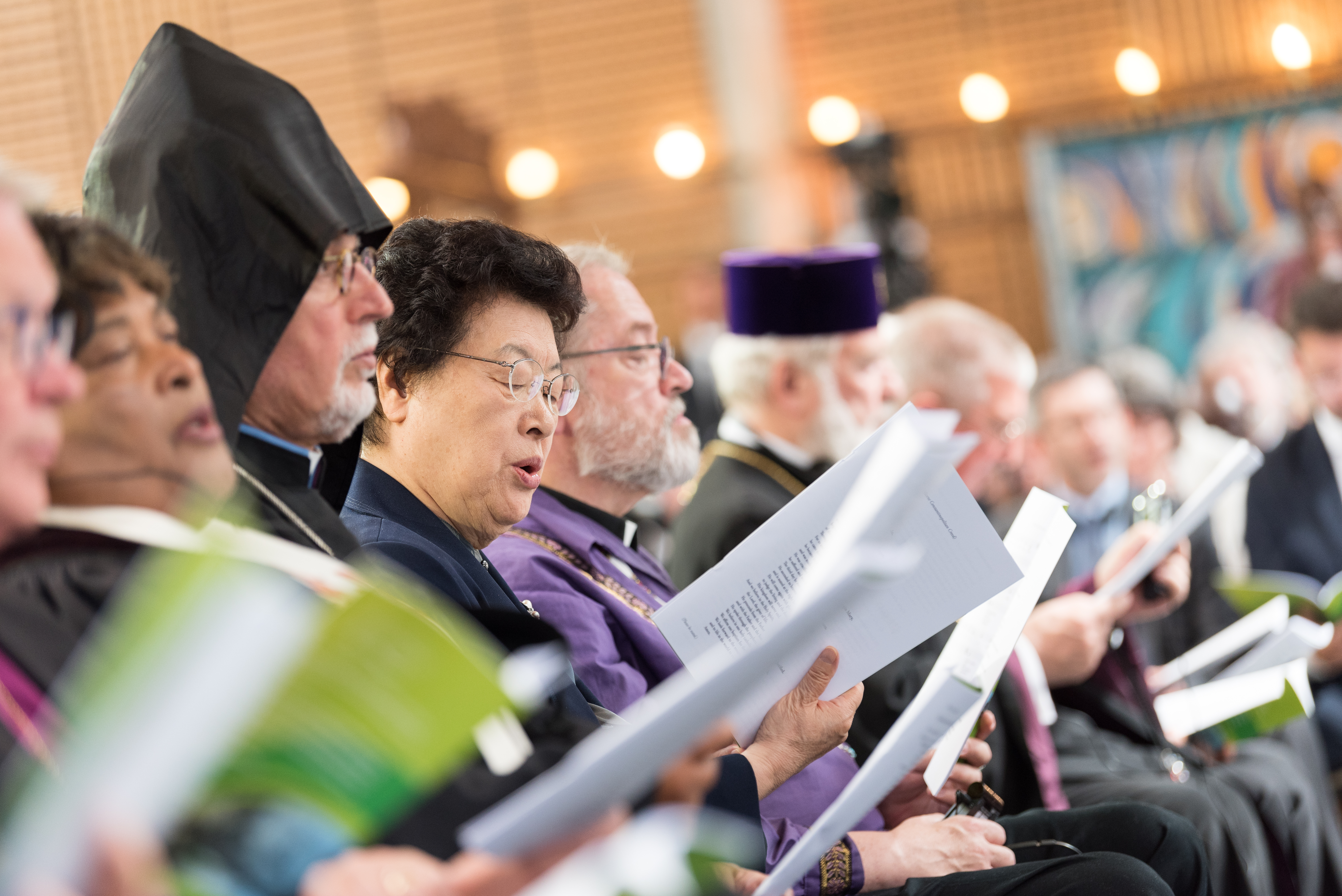 What are your next steps after Geneva?

Our work will continue in various areas. The Joint Committee will proceed with its commitment with a set of planned meetings. We also organized an important conference in Rome for next September on xenophobia, racism and populism, along with several initiatives and debates on mission and theology. We carried out a joint reflection on a significant document on the understanding of the Church, which is the fruit of in-depth studies, on which we are presently collecting the response of our Churches and of the Catholic Church. And then

We will continue carrying forth our joint efforts for migrants and refugees, for justice, for peace, in our different areas of activity in the Middle East, in South Sudan, in Congo, in Colombia and Korea. There is a lot to be done together.

What’s the last thing you said to Pope Francis before his departure?

I told him I would ask God to bless him for his commitment and assured him that he is always in our prayers .