More than 100 thousand pilgrims have already paid homage to the mortal remains of the “Good Pope”, who on the decision of Francis has “returned” to his places of origin thanks to the "peregrination" that left from the Vatican on May 24 and arrived in the town of Sotto il Monte, after a stopover in Bergamo. The birthplace of Angelo Roncalli, where he returned to once a year, in the words of Mons. Claudio Dolcini, parish priest of the shrine that contains the urn of John XXIII 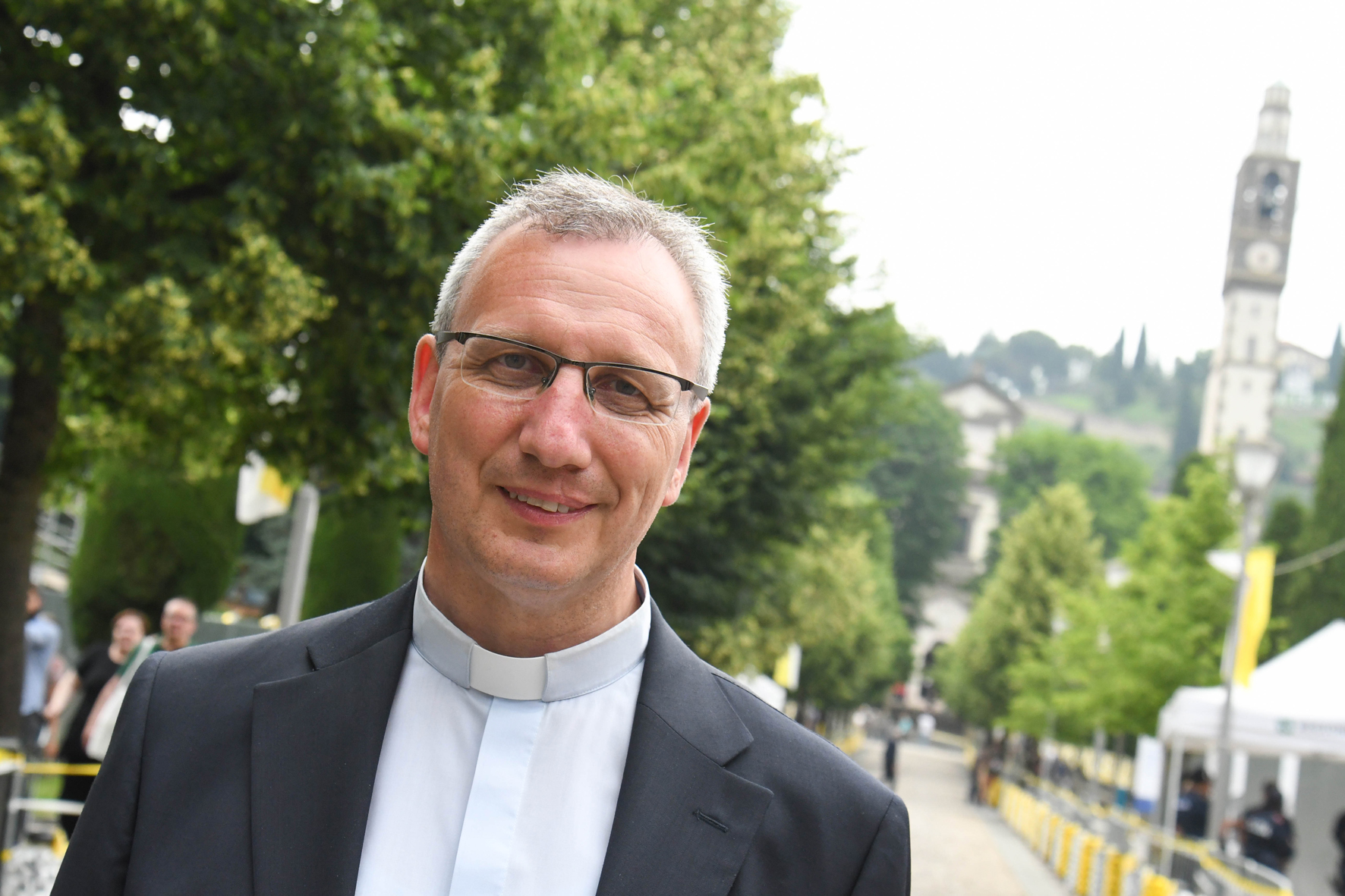 (from Sotto il Monte) “It is another great miracle of Pope John.” Msgr Claudio Dolcini, parish priest of Sotto il Monte, has no doubts. He described the “magical atmosphere” of the past few days, thanks to the “peregrination” of the urn containing the mortal remains of John XXIII – “Pope Giovanni” for his people – granted by Pope Francis from the Vatican to the birthplace of the saint, with the first stopover in Bergamo. When we interviewed him, the eyes and the heart of Msgr. Dolcini expressed the joyful surprise of one who was given the privilege to witness a vast crowd of faithful gathered to venerate the relics of “Good Pope John”, with discretion and composure. “It seems to be in heaven”, he exclaimed commenting on the spectacle of “peace, beauty, deep joy” that visitors arriving to venerate the body of the Saint offer to his gaze. The inflow of pilgrims exceeded all expectations, registering 100,000 visitors already after the first week. But there is still time to beat this record until 10 June, the date when the relics will return to the Vatican. 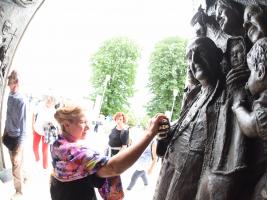 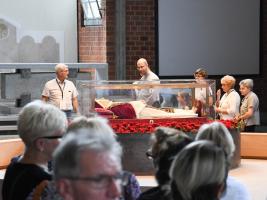 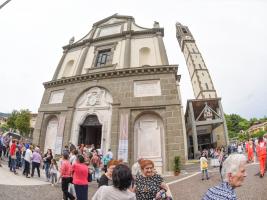 Vocation in a window. For Angelo Maria Roncalli it all began here, from a window. It was the window of his family home, not far from the church. As a child, every day Angelo “would observe the parish priest as he started to celebrate Holy Mass or when he imparted the holy Communion to one of his parishioners who had fallen ill. This is probably the place where he heard the calling of the Lord, the echo of the first appeal of what was to become his vocation.” A presage rooted in the concreteness of a large, poor family, raised with the fatherly and motherly milk of the faith. That window recalls another window, that on the third floor of the Apostolic Palace from where he addressed the faithful after his Papal election. He was the first Pope in the history of the Church to initiate the tradition of the Angelus prayer. As we enter the wood-and-stone house we perceive the atmosphere in which the man who was to become John XXIII spent the first 10 years of his life, with his feet firmly on the ground and his gaze directed to the skies, as encompassed in the theme of the peregrination, rephrased from a quotation of the late Pope: ““We start from the land where I was born and then continue up to heaven.” A few meters separate the house from the Saint Mary in Brusicco church, where Angelo was baptized on November 25 1881 and where today lies the tombstone which covered the Pope’s grave in the Vatican Grottos, along with the altar where Angelo Giuseppe Roncalli celebrated his first Mass in Sotto il Monte. 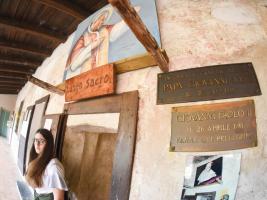 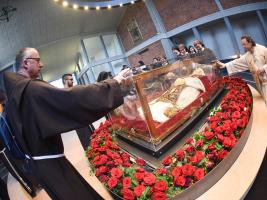 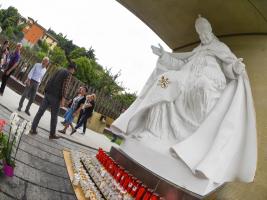 Parish and shrine. The itinerary to the places of Roncalli culminates at St. John the Baptist church, now a parish church and Sanctuary of John XXIII, where the body of the Pope lies in a transparent case surrounded by red carnations. What does it mean today to be the parish priest of Under the Mount? Mons. Dolcini replied highlighting this precious heritage:

”Here the daily life of the parish is intertwined with the life of a shrine that welcomes thousands of visitors every year.”

“The pastoral proposal is evangelization, marked by simple yet solid devotion, reflecting that of John XXIII, made of prayer, of the Word of God, of catechism, of Eucharistic celebration, of confessions. We dedicate great care to the celebrations, where the Word is the heart, and we leave great room to listening to the faithful who ask to be embraced, and to their need for sharing. Many people come to our parish, including non-believers. Pope Giovanni was an icon of dialogue and peace who knew how to garner attention as a ‘pontiff’, namely, as a builder of bridges inspired by Christ.” 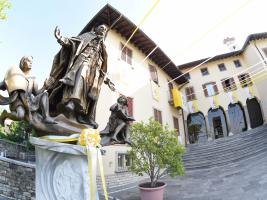 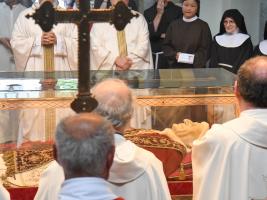 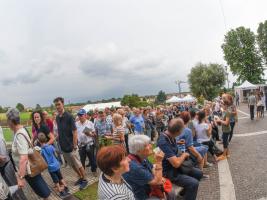 The Crucifix and the world map. It is no coincidence that Angelo Roncalli has chosen the Crucifix as the emblem of the faith, as the one kept in Ca’ Maitino, the residence where he used to stay every summer during his service as bishop. Inside, in his bedroom with the mattress and pillow on which he died on June 3 1963 in the Vatican, he asked that the Crucifix be placed on the opposite wall, beneath the prie-dieu, so he could look and it and pray to it even those evening when difficulties, worries or sufferings made it more difficult to fall sleep. After the Pope’s death his private Secretary Msgr. Loris Capovilla transferred the private chapel from the Apostolic Palace to a hall adjacent to the bedroom. On the kneeling-stool lined with damask red velvet, the Pope would gather in prayer for four hours, even in 1962 when the war – then averted – seemed imminent as a result of the Cuban crisis. In this house-museum, full of memories, portraits and photographs of the time, but also of many votive offerings from all over the world, stands the globe made for him by the German Fathers of the Divine Word, as the Pontiff could not leave the Vatican but wanted to observe the earth and bless the missionaries scattered throughout the world, geolocating them, we would say today, with accurate precision. Beside the names of the Continents and nations, above the city of Venice, Saint John XXIII asked to insert the name of Sotto il Monte. 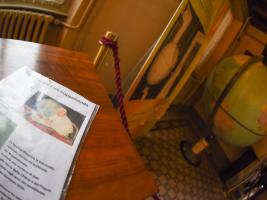 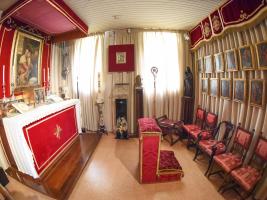 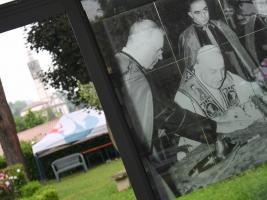 Why was he so closely tied to his hometown that he has been absent from for most of his life? “He had a prestigious role inside the Church”, Msgr. Dolcini replied. “Sotto il Monte, where he returned once a year, helped him remain humble. Coming here, retracing his peasant origins, a simple life made of authentic values and of devotion to work, helped him preserve the meekness of the Gospel inside him: that of a Pope-priest who was also a rural priest, with a gaze extended to the whole world and a focus on the man on the street.”