Interview with Metropolitan Hilarion of Volokolamsk of Moscow’s Patriarchate. “We are deeply concerned about the situation in the Middle East and the massive exodus of Christians from that region. A genocide is being perpetrated by Islamic extremists. We have been denouncing this situation on every occasion, whenever we can. We feel a sense of urgency, because if Christians are fleeing and the conditions for their return one day are not created, they will never return to their homeland”

The veneration of the relics of St. Nicholas in Moscow and St. Petersburg was the most significant event in the relations between the Russian Orthodox Church and the Roman Catholic Church. Catholics and Orthodox are united by the joint concern for Christians persecuted in the Middle East. Full support to the Day of Prayer for Peace, called by Pope Francis on July 7 in Bari. Finally, the major question of a further meeting after the one in Cuba between Pope Francis and Patriarch Kirill: “We are still working on the upshot of that meeting and on the implementation of the decisions taken on that occasion.” Interview with Metropolitan Hilarion of Volokolamsk, Head of the Department for External Church Relations of Moscow’s Patriarchate, presently in Rome on the invitation of the Italian Bishops Conference with a delegation of Moscow’s Patriarchate for a “three-day” pilgrimage in the city of the Apostles Peter and Paul and the early Christian martyrs. 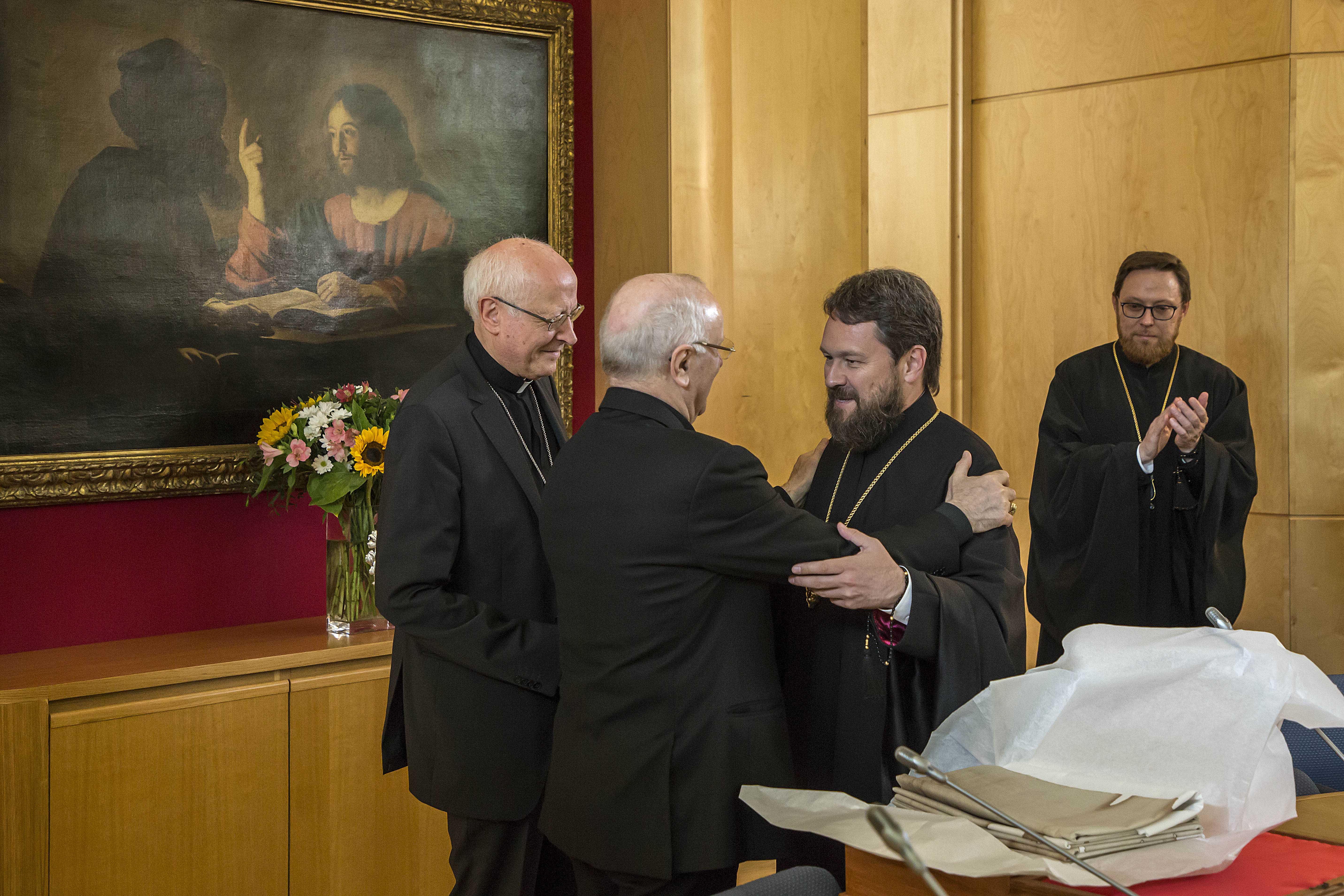 Your Eminence, you are here in Rome for a “work and fraternity meeting” with the Italian Catholic Church on the theme of the pilgrimage. What does this meeting mean to you?  First of all I wish to say that this is not an ecclesial conference. It’s an initiative that is part of a broader Forum promoted and addressed to the civil societies of Russia and Italy. The Churches play an important role in society, thus the involved parties have jointly decided that the Forum should include the contribution of the Churches. It’s the second dialogue meeting between the Italian Bishops’ Conference and the Russian Orthodox Church. The first meeting took place last year in Moscow, dedicated to Christian culture, to religious icons, to Christian music and literature and to cultural exchanges. This second meeting ongoing in Rome focuses on pilgrimages, since we consider pilgrimages something that we share. An important example for the Orthodox Church is the pilgrimage to Bari for the veneration of the relics of Saint Nicholas, one of the most revered saints in Russia. Large numbers of pilgrims travel to Bari all year round to venerate the Saint. When a part of the honourable relics of the Saint were brought from Bari to Moscow and to Saint Petersburg last year, over two million believers arrived to venerate them.

It was the most significant event in the relations between the Russian Orthodox Church and the Roman Catholic Church.

What role do these initiatives of pilgrimage and common veneration of the Saints play in the dialogue between the two Churches?   These meetings allow us to give a practical dimension to the dialogue process. Far too often dialogues are conducted only on a theoretical level. I refer to the theological dialogue between the Orthodox Church and the Catholic Church: this is obviously an important dialogue, but it is a dialogue that only deals with theological and historical issues that don’t address people’s lives and their own realities. On the other hand, people know nothing or almost nothing about these dialogues. When the relics of St. Nicholas arrived in Russia, from the moment they left Bari until they reached the Cathedral of Christ the Savior, Russian national TV broadcast live, for many hours, the journey of the relics, transmitting the images throughout the country which thus had the opportunity to experience and participate in this important event.

Everyone was aware that the event was jointly organized by the Catholic and Orthodox Churches.

In your speech at the Italian Bishops’ Conference you addressed the dramatic situation of Christians persecuted in the Holy Land. You mentioned the word “genocide”, the intention to destroy the Christian presence in that region. There is also a “draft list” of places of worship and sites to be restored or rebuilt in order to allow Christians to return to a normal life. Is this another item of concern and common action that unites all Christians?  Indeed, we are extremely worried about the situation in the Middle East and the massive exodus of Christians from that Region. There is an ongoing genocide perpetrated by Islamic extremists. We have been denouncing this situation on every occasion, whenever we can, also as an encouragement to promote joint action in favour of persecuted Christians. We launched a set of initiatives to this regard, but they are only a small fraction of what is needed on the ground.

We feel a sense of urgency, because if Christians are fleeing and the conditions for their return one day are not created, they will never return to their homeland.

Even Pope Francis felt the same urgency and concern. In fact he promoted a Day of Prayer for Peace in the Middle East in Bari. What do you think about this initiative? I think it’s very important. Many initiatives have already been organized on this theme. I firmly believe that as Churches we are all called to show our solidarity with the Christian population persecuted in the Middle East.

Your Eminence, what is the current state of play of the dialogue between Moscow and Rome? After the Rome meeting, it is widely hoped that the Patriarch and the Pope will meet again soon. Do you consider it possible?

The meeting between Pope Francis and Patriarch Kirill in Havana represents the beginning of a new chapter in our mutual relations.

On that occasion, many decisions were taken that we are still trying to implement. So we are working on the corollary of that meeting and on the implementation of the decisions jointly taken by the Pope and the Patriarch.