Cardinal Bassetti’s opening address at the Italian Bishops’ Conference - CEI - Assembly focused on the political situation in the Country. "The game is not lost”, but forming a government is not enough to be able to lead the Country. The appeal to “accept the challenge of the new in Italian politics to make an examination of conscience”, starting with the laudable contribution of Catholics in the past 100 years, with don Sturzo’s appeal to the “Free and strong”, acting as an “actively committed minority.” Expressions of “esteem” to President Mattarella. “European breath” and "public ethical conduct” are Italy’s founding principles.

The “game is not lost.” Despite “concerns”, “difficulties”, the “situation of prostration”, the  “cultural and moral disorientation”, “widespread resentment” and  feelings of “indifference to other people’s fate,” the “simmering tensions and protests”, the “social unrest”, the “stalemate” and the “confusion of roles” that characterized the beginning of this term. Because “the country is healthier” than it is depicted. With an unblinking, responsible gaze Cardinal Gualtiero Bassetti, Archbishop of Perugia-Città della Pieve, delivered the keynote speech on the second day of the CEI Assembly, that was opened last evening by Pope Francis. “In this delicate stage” the Church is ready to undertake a “conscience examination”, and is equally determined in her warning: a government is not enough to guide a Country.

Young people and the media. In his opening remarks Cardinal Bassetti recalled the “long, fraternal, open dialogue meeting with the Holy Father.” He assured that concerns over the “haemorrhage” of vocations, the choice of poverty and transparency, along with the reduction of dioceses, mentioned by the Pope, constitute equally important priorities of the Italian Church. The first year of CEI presidency has been under the banner of “listening and encounter”, of sharing and service.

His Eminence said, mentioning the pastoral Guidelines of the past decade. The bishops are called to “take stock” of the time ahead of the Bishops’ Synod scheduled for October next, themed “Young people, faith, and vocational discernment.”

“Bearing aloft the habit” in political life. The history of Italian Catholic political life began one hundred years ago with the appeal to the “Free and Strong” launched by a group of “staunch democrats” led by don Luigi Sturzo. Bassetti recalled: “It heralded the onset of Italian Catholic political activity, which left an imprint in our democracy and gave us distinguished examples of dedication, humbleness and intelligence.” “We went through glorious and painful times, we experienced weakness and strength, debauchery, betrayal, diaspora”, the Cardinal went on, retracing the main stages of Italy’s political history. “Old political parties collapsed, new ones came to the fore, but it cannot be denied that in thousands of Italian Municipalities people without visibility and without gain have supported our fragile democratic system.”

“One of our favourite sons must return to govern the public realm”, proposed the CEI President.

“Italian Catholics – Cardinal Bassetti said referring to Blessed Giuseppe Toniolo – have always been driven by the need to distinguish themselves and bear aloft the evangelical habit also in political life. The history of the Italian Church is of great significance also in the light of the special consideration for the political aspect of evangelization: no other Bishops’ Conference has such a wealth of documentation and testimonies.” 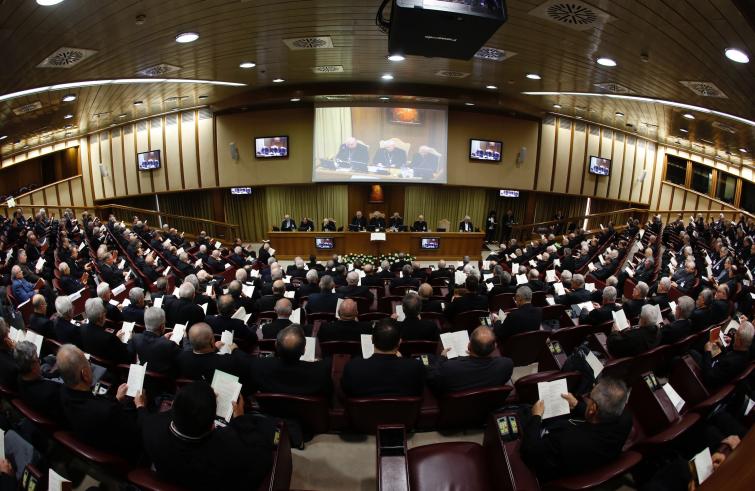 “Now is the time to accept the challenge of  the new in Italian political life to make an examination of conscience, to renew our political pedagogy and help those who feel that their religious life is not fulfilled without political commitment.”

“Papal teaching and magisterium paved the way to boundless realms – as the Holy Father mentioned last evening – but if we fail to inhabit them, these realms will remain empty.”

Catholics engaged in political life must be “actively committed minorities.”

“At a crucial time in our history, it is with conviction that we express our esteem to the President of the Republic for his wise and patient guidance, doing his utmost to give Italy a government”: the tribute to Italian President Mattarella.

“Everyone should remember that a government is not enough to be able to lead a Country”,

Cardinal Bassetti pointed out in the passage centred on the Country’s delicate political stage. “It is necessary to possess an in-depth knowledge” of this Country, “to know and respect its history and its identity”, was the warning to all political forces. “It is necessary to know the world in which we live, which is where our Republic – a co-founder of united Europe – yearns to return to carry out its responsibility as a free, democratic and mutually-supportive Country.”

“European breath” and public ethics are “integrating parts of our culture” to which the Church intends to give a “effective contribution” to “rekindle hope, to mend the rifts in the Country, to pacify society.” There ensues the need to “stand aloof from widespread disenchantment, arrogance and moral baseness”, as well as from “our own idleness.”

Mediterranean and peace. “Before the fall into fanaticism and fundamentalism, words and signs that don’t not fuel hatred and violence, but that foster reconciliation and dialogue instead, are of decisive importance”, Bassetti concluded, illustrating the privileged attention the Italian Church intends to give to the Mediterranean, relaunching the idea of a “reflection and spirituality meeting for peace” in the Mare Nostrum, that witnessed “the birth and the spread of the Christian experience, where the Church has been present since the beginning” and that today, set in the framework of “ecumenism and interreligious dialogue, “can give an important contribution, in thought and action, to a culture of peace.” In the coming days the bishops will discuss ways to promote and organize the initiative, with the preliminary creation of an operational Committee.