After the ability to listen comes the ability to share. The visit to Peru, second leg of his 22nd apostolic visit, marked the Pope’s “first time” with the Indios and the first mention of the term “femicide.” The Synod of the Amazon region ideally began in Puerto Maldonado. The visit to the district of Buenos Aires in Trujillo hit by El Nino floods, and the meeting with youths in Plaza de Armas. Two public prayers: with 500 cloister nuns and in front of the relics of the Peruvian Saints, in Lima’s cathedral. His message to the bishops: learn digital language and denounce corruption

“We must break with the historical paradigm that sees the Amazon as an inexhaustible larder for other countries without taking into account its inhabitants.” In his meeting with the indigenous peoples of the Amazon region – mentioned one by one, each in their own idiom, in the opening remarks – in Puerto Maldonado, the Pope quoted from Saint Francis’ Praise of the Creatures in the defence of the inhabitants of a territory threatened today more than ever by a new form of colonialism, and by a “single mode of thought” of a formulaic environmentalism that downplays its dignity.

Francis’ first meeting with the indigenous people, the first leg of his visit to Peru, is not marked by paternalism but by a spirit of sharing:

His approach is one open to be clothed by them with the typical ornament of an Indian chief, wearing a crown of feathers and multicoloured beaded jewelry across the shoulders. It’s the approach of one that pays homage to the resilience of the inhabitants of the Buenos Aires district of Trujillo, the “city of everlasting Spring”, brought to its knees by last year’s devastating floods, visiting its streets wearing the Chullo, the typical Peruvian headgear. 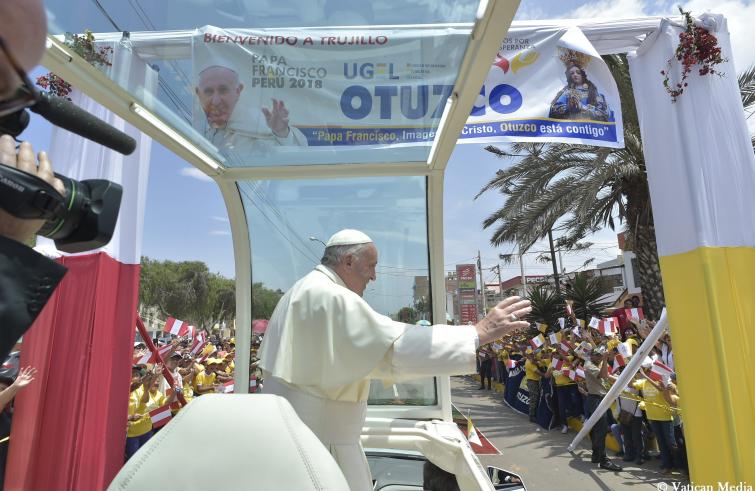 Under the gaze of the Virgen de la Puerta, in the Marian celebration with the effigies of the Peruvian Saints and of Virgin Mary, Francis described women as the true “driving force” of Peru and – for the first time in his pontificate – used the term “femicide”, with a heartfelt appeal to combat the numerous episodes perpetrated in Latin America, which far too often occur in isolated household environments.

The Amazon Synod, planned for 2019, begins in Puerto Madolnado, the Pope said. To thousands of youths gathered in Lima’s Plaza de Armas for the second-last destination of the journey, Francis asked not to “photoshop” their hearts or their lives. In the address at Lima’s Presidential palace the Holy Father called upon State authorities and bishops to fight against corruption. 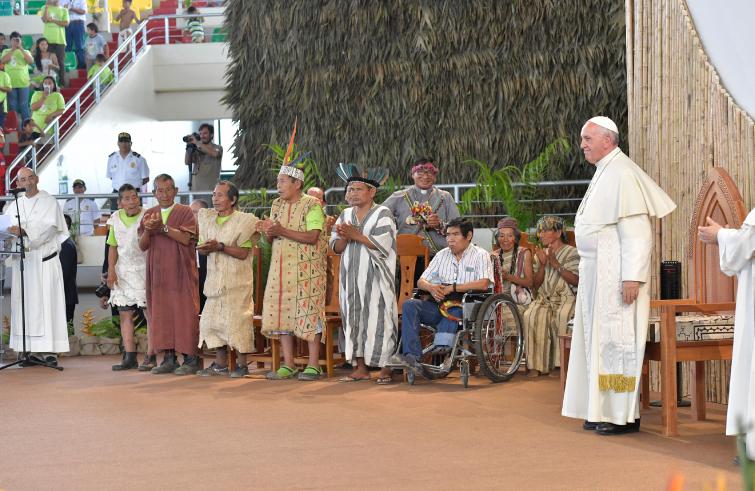 Defending life, land, and cultures. Puerto Maldonado is the gateway to the Amazon forest. On January 19, speaking to 55 indigenous peoples, a population of approximately 200 thousand living in the Forest, representing 6% of the Peruvian population, the Pope voiced

that was reaffirmed in the meeting with the population of the small town. “Shaping a Church with an indigenous face” is Francis’ appeal, calling upon the youths, former guests of the Little Prince Children’s home , not to be content to be “the last car on the train of society.” The meeting was followed by the lunch with 9 representatives of the Peoples of Amazonia in the Apaktone Pastoral Centre of Puerto Maldonado, before returning to Lima for the meeting with authorities.

No to “corruption”. “Promoting and developing an integral ecology as an alternative to “an outdated model of development [that] continues to produce human, societal and environmental decline”, is the invitation from the Presidential Palace, along with the appeal to counter

the “social virus” of corruption. 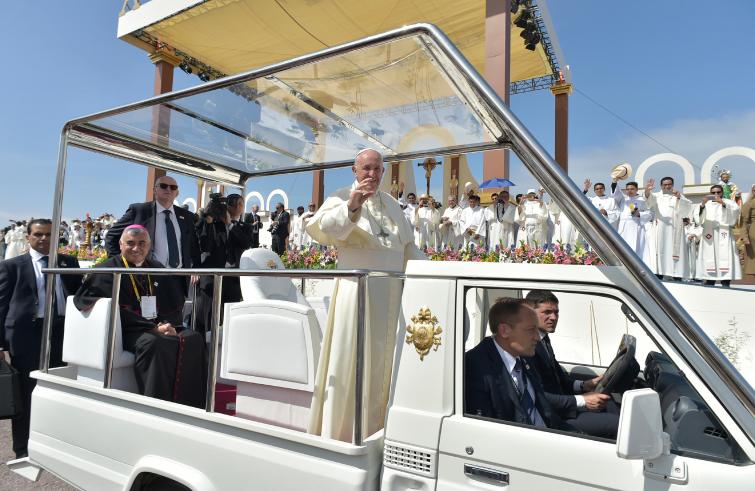 Resilience. “When you felt the brunt of the Niño, these lands kept moving forward; these lands had the oil needed to go out to help one another like true brothers and sisters.” It’s the tribute to the people of north Peru during the Holy Mass of January 20 at the Waterfront esplanade of Huanchaco, a tourist destination and seaside resort, in the presence of 200 thousand people, during which Francis voiced the plagues afflicting the north of the Country: organized crime, lack of education and employment, and of secure housing. In the meeting with the clergy in Trujillo’s Seminary, Francis called upon one thousand priests, women religious and seminarians to be able to laugh at themselves so as to not become “professionals of the sacred by forgetting your people.” No to divisions and “tricks”.

No to “femicide.” In the Marian celebration in Plaza de Armas, before the depictions of the Peruvian Saints and of Our Lady, Francis reiterated that the “language of God’s love is always spoken in dialect”:

“Mary will always be a mestiza Mother”

The final homage went to the mothers and grandmothers, “true driving force” of Peruvian society. It is necessary to fight against “the numerous cases where women are killed”; a “scourge” that affects the Latin American continent. 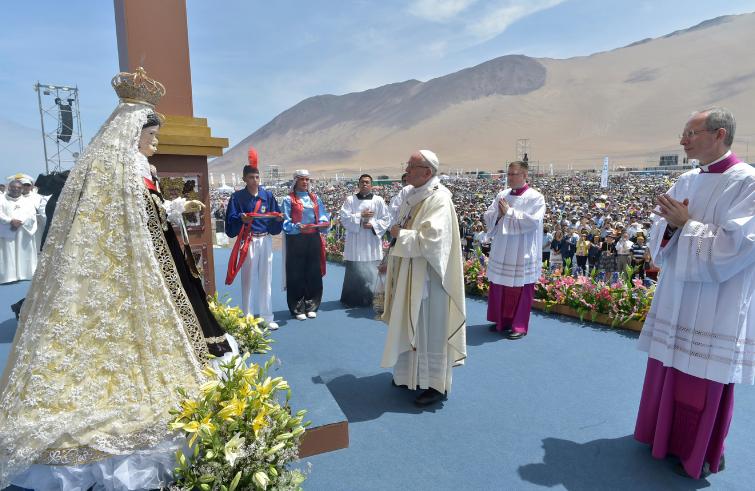 A Church that goes forth. The Pope’s last day in Peru began with the mid-day prayer along with 500 women religious of contemplative life: “The Church needs you”, Francis said, calling upon the nuns to pray for the convicts, the migrants, the refugees and the persecuted, for broken families. Stopping in front of the relics of the Peruvian saints, in Lima’s Cathedral, Francis said a prayer with the faithful in which he expressed the hope that the Church of Peru may be a “Church that goes forth.” Two messages were directed at the bishops, to whom, immediately after his address in Lima’s archbishopric, Francis dedicated comprehensive, 50-minute unprepared remarks: learn the digital language and denounce corruption. In the Angelus prayer dedicated to the young Francis mentioned the upcoming Synod and prayed with them for Congo. 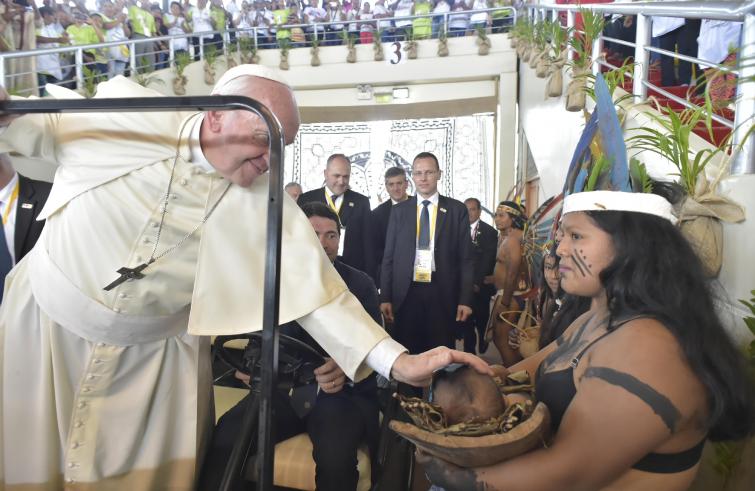 Walking through the city. To “counter the globalization of indifference” is the appeal that concluded the closing Mass in Peru, celebrated in Las Palmas Air Base with a festive crowd. From the capital of Peru Francis traced a great fresco of our cities, with the invitation to gaze at them with the eyes and the style of Jesus, overcoming the “Jonah syndrome” and defending the rights of the many “non-citizens”, “the half-citizens” or “urban remnants” populating them. Finally, without failing to notice those who “have given up in the face of indifference, laid low by the grave sin of corruption.”

“May breakdown be overcome by fraternity, injustice defeated by solidarity, violence silenced by the weapons of peace”, the final wish.