Over 300 letters – many of which published for the first time in the volume Un’“obbedienza in piedi”. L'epistolario tra don Primo Mazzolari e i vescovi di Cremona, by Bruno Bignami and Diletta Pasetti – constitute the copious correspondence between don Mazzolari and the bishops of his diocese of Cremona: Geremia Bonomelli, Giovanni Cazzani and Danio Bolognini. “The epistolary – the editors explained – enables us to deepen our knowledge of the figure of the parish priest and to intensify Christian spirituality as a place of incarnation and decisions, especially with regard to the largely-debated theme of obedience. The letters convey the fatigue of fidelity to the Gospel and they reveal candour, open-heartedness, trust, support, doubts, encouragement, sharing, reasonableness. A remarkable picture of faith and love for the Church

On March 1st 1958 the bimonthly “Adesso”, of which Don Primo Mazzolari was the inspirer, published a letter addressed to the Bishops of the Po Valley. The document bore the signature of approximately ten priests from Cremona and Brescia, but the parish priest of Bozzolo was clearly its author. The purpose of the letter was to reawaken the bishops’ consciences on the sad situation of farmers and peasants in the Lombardy Plain. The letter denounces the exodus of the rural world that deserts churches because the Church’s closeness is not being perceived. Concern is voiced over the farmers’ working conditions: “The salary of a peasant, including housing and other additions, is lower that the wage of the lowest paid industrial labourer” – the Letter denounced. Farmhands are paid starvation wages, in many cases their families live in stables or in dismal hovels, their salaries don’t correspond to actual hours of work, they have no social protection in case of sick leave … can the Church stand idly?

The bishops interpreted Don Mazzolari’s initiative as a lack of trust in their guidance. They deliberated against don Don Primo, pressuring Msgr. Giovanni Battista Montini, Archbishop of Milan, to intervene and recall the priest from Cremona (January 1959). The present letter, sent to the Bishop of Cremona Msgr. Danio Bolognini, constitutes Don Mazzolari’s defence in the light of the misunderstandings sparked off within the Catholic community. 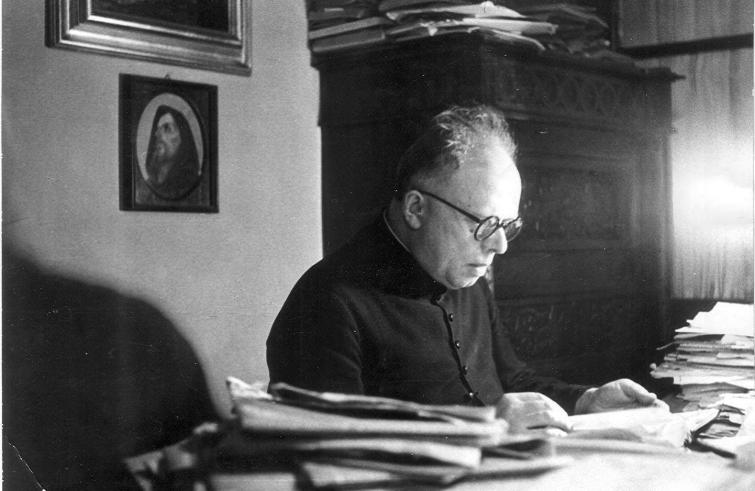 the Letter to the Bishops of the Po Valley, whose authorship I am not ashamed to recognize as my own, is the object of heavy criticism, ascribed to you, circulating among the priests of our diocese.

I will start by saying that many parish priests from several dioceses, who have had the opportunity to read the Letter, request the honour to sign a document, “as sober in its fairness as it is trustful and devoted in its urgency.” It was received with broad consensus also by trade unions, bringing about, sooner than expected, improvements in social security for salaried peasants and farmhands.

It was published by many diocesan weeklies, while la Voce Cattolica, published in Brescia, welcomed the fact that priests from this diocese were among the signatories. Hon. Giulio Pastore, national Secretary of Free Unions, Minister for Depressed Areas, mentioned it in many of his speeches and in a recent statement, summarised by ANSA news agency with the following words: “This is a problem.”

The very adversaries spoke of it in respectful terms, although they sought to gain electoral advantages from the inopportune and ill-concealed silence and discontent within our own realms, albeit unsuccessfully. Everyone is free to think what they will of the public appeal to the Bishops, especially a Bishop, who may have strictly personal reasons, and within certain limits, all of which downright reasonable and acceptable.

What surprises and saddens me the most in the expressions ascribed to Your person, is the claim that the problem does not concern the Bishops, and thus the Letter is addressed to the wrong recipients and the idea that with such initiative don Mazzolari has dishonoured the diocese.

Your Excellency, salaried farmers and peasants number half of our diocese, and I believe that You, a man of good heart who comes from that area, are not content with pastoral Visits that are confined to assessing figures, conversing with children, blessing some Catholic Action groups, exhorting poor people – who are losing or have already lost faith in religion and in priests, and who preserve but the ritual habits – to have patience.

“This problem”, which the “letter” has neither fabricated or discovered, this deep suffering of the rural world, is yours more than it is mine, for, by Divine Commission, you are a greater father and shepherd than the parish priest. To You it belongs by virtue of the lofty consecration to mercy, of which the Holy Spirit has made you the “emblem”, which confers meaning to all other small emblems: the pectoral Cross, the mitre, the ring, the pastoral ministry … The latter decorate the prelate, the former constitutes the Bishop, called to govern the Church of the Living God.

As far as I am personally concerned, I cannot believe that my Bishop has thought and said that that “letter”, written by one of his elderly priests and signed by other three of his priests, is seen as a disgrace for the diocese, for the Bishop, for the clergy of Cremona. “In hoc enim laboramus ed maledicimur…”. (“That is why we labour and strive”: a quotation from Paul 1Tm 4:10, Ed.’s note).

I am a poor priest, this is true, and my Bishop has many reasons to hold me in low esteem and not to love me, were it only for the inconveniences and apprehensions I cause him in abudance. But I don’t think that I have reached such low levels of thoughtless aberration to the extent of humiliating and bringing dishonour to the Church of Cremona with my writings. Nor is it the belief of the Holy Office, or of the Bishops of the Po Valley, although they did not deign to receive our poor, trustful voice. Your Excellency, indeed I am seldom present in the bishopric and I rarely attend ceremonies, but whenever health and reputation are involved I am present: just as I am ready, having overcome the ordeal, to return to the silence of my presbytery without asking anything in return. Nor do I have the habit of joining the voices of those who make idle talk of the Superiors and the Confreres. If I have something to say I speak out or I put it in writing with openness and sincerity, as you well know and as you may find token of in the voluminous “personal folder” filed under my name in your archives.

I am sixty-eight years-old: it is thus but a brief endurance that I am asking of my Bishop and of my confreres as an extreme act of mercy. I am “flawed”, I am aware of it, and in these days of loneliness and prayers at a spiritual son of don Calabria, this makes me feel more upset and repentant than usual. However, may I be allowed to say that despite this wretched constitution, unable to bend to present times or to mankind, I have always loved my Church, just as I have loved my diocese and my Bishops, whom I constantly sought to serve upright with free and filial and devotion, without begging excuses for my wrongs, without demanding esteem or favours for the small things that I have done with the help of God.

The One who judges me is “on the opposite shore”, where I am already present with my heart, and I hope that in forgiving me He shall not be as restrained as mankind, for this sole reason that I was never ashamed of Him although I didn’t know how to love Him in full and was unworthy to represent Him.  Kissing your right hand with veneration and respect.