The gesture of the Patriarch of Constantinople and of the Bishop of Rome exemplifies the full communion between the two religious leaders and the two Churches: joint prayer, based on the same foundations, generates an unimaginable movement of communion since by doing so, the two Churches stand side by side in front of God our Creator, voicing the same concern and the same prayer

Sometimes we are under the impression that today, speaking about ecology is somewhat fashionable. It certainly is a popular subject, which draws attention and interest, at least in certain environments and in the heart of a considerable number of people. However, there is also another acknowledgement that needs to be made, that is, the recognition of an element that appears to be equally “trendy”, clearly overly widespread, namely, the proliferation of an uncountable number of crimes: from the discharge of small waste, to pollution of huge proportions which amount to veritable acts of violence against our ecosystem. The fact that it is spoken of and spoken of often perhaps signals

the development of a new sensitivity towards environment-related issues

namely, recognising sustainable development and condemning every form of wrongdoing could be an indication that people – or at least a large number of them – feel the need for a change of course. If such major attention, which should (the use of the conditional tense is unfortunately a must…) be the daily bread of every human being, introduces a Christian perspective, then the world is not only Mother nature, but it is primarily Creation. In other words:

the Christian perspective presents the proposal of a vision of the world that contains “something more”, that very Presence that is the Presence of God,

who offers the created man the rest of the cosmos, which He created to be enjoyed and protected. Thus creation takes on the physiognomy of the figure that Christian tradition as a whole indicates with the term Sacrament: the element of communion between God our Creator and the created man. In the created world, God and man truly meet: God, who actualizes creation, and man, part of creation, called to actualize the protection of same creation. 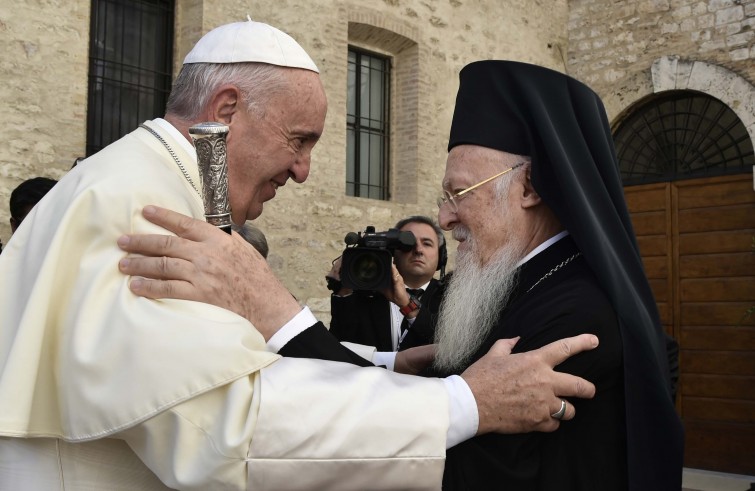 As known, when a single voice conveys these concepts, they risks resonating in a vacuum and fading away. But many voices make a choir. Patriarch Bartholomew and Pope Francis, along with the Churches and the faithful they represent, today unite their voices to raise attention on something that isn’t merely important. It is decisive. The present situation, write Francis and Bartholomew “reveals a morally decaying scenario”, that risks tragically drawing apart what God planned and continues proposing for us. On the basis of this bitter, albeit realistic statement,

The Orthodox Churches and the Catholic Church pledge to pray and call to prayer for the environment,

in particular today, September 1st, on the occasion of this Day of Prayer for Creation. I wish to seize this propitious occasion to underline that this proposal, this gesture by the Patriarch of Constantinople and the Bishop of Rome, exemplifies the full communion between the two religious leaders and between the two Churches: joint prayer, based on the same foundations, generates a movement of communion that we can’t even imagine. In fact, by doing so the two Churches stand side by side in front of God our Creator, voicing the same concern and the same prayer.

That Eucharist, which Catholics and Orthodox have not yet shared in full, is made of created elements, the bread and the wine, that become the epitome of the whole of creation.

But this leads us to conclude that the Eucharist that we still don’t share in the liturgy is nonetheless shared in the ecology; and in this way the care for the creation becomes a prophetic sign of the full communion towards which we are directed. If true communion is contagious and dynamic (and indeed it is!), the next passage could be to unite the voices of all Christians, including the believers from Protestant and Anglican, eastern and Pentecostal denominations, to perceive the strong, widespread commitment for the protection of creation. Thus the choral voice of the Orthodox Churches and of the Catholic Church would transform the care of the creation into the symphony of all Christians: in praise to God our Creator, and for the good of every human person.