His closeness to SIR and to diocesan weeklies

“As far as I understand SIR’s Editor-in-chief is a person who does not work on his own, his colleagues are as many as the editors-in-chief of diocesan Catholic weeklies. It’s a unique, extraordinary experience.” With a sentence and a smile Joaquín Navarro-Valls commented on the presentation of SIR news agency. That’s how we like to remember him, as we are informed that he passed away on July 5 at 80 years-old. It was January 1989, Fr Giuseppe Cacciami, Giovanni Fallani and the undersigned presented the launch of the news agency SIR to the Director of the Press Office of the Holy See.  Navarro-Valls immediately understood that it was an  original “professional workshop”, fruit of the thought and history of the Italian Federation of Catholic Weeklies (FISC). In particular, he was interested in a passage of the op-ed of the agency’s first news report:

“SIR wishes to give a concrete contribution, to strip religious information of those reductive models that select it, disseminate it and interpret it through ideological, political and partisan lens”. 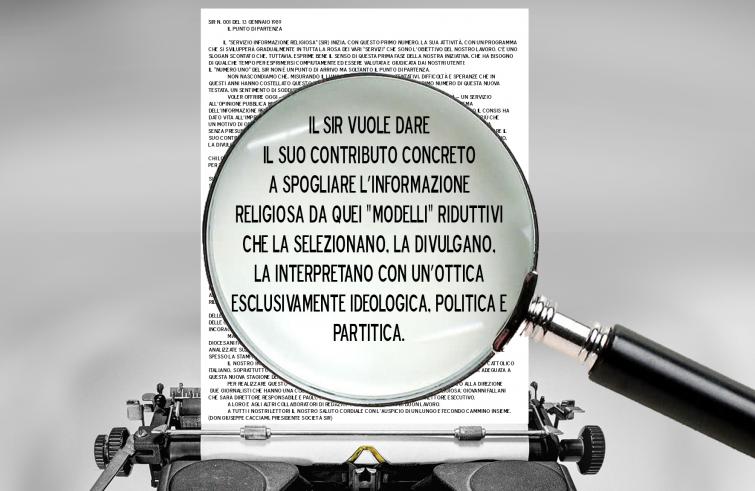 In those words he saw the confirmation of his service to the Church and a support to his professional commitment.

“I will follow you with great attention – he added – because I identify with your choices. I am also deeply interested in learning what local media outlets write about the Pope, for these are publications that are closer to the opinion of the man on the street more than any other media. Not only Vatican correspondents write about the Pope.”

We were touched by such sensitivity, we didn’t expect that the Director of the Vatican Press Office, used to interacting with powerful media outlets worldwide, had at heart this dimension of religious news.

He perceived the challenge that SIR and FISC had decided to address, to which they intended to respond with the languages and rules of journalist professionalism.

He found we were on his same wavelength.

He also grasped some “signs of creativity” of FISC editors in chief.

“I would never have thought that a few words with the Pope in the final greetings at the end of an audience could become an interview. A FISC editor-in-chief succeeded in this endeavour without even having to ask my authorization.”

The author was Fr Alfio Inserra in an op-ed published on the weekly of the city of Siracusa featuring an interview with Pope John Paul II. A few lines faithfully reported had been transformed into a journalistic masterpiece that brought a smile to Navarro-Valls.

During his service in the Vatican he preserved his relationship with SIR. He understood that the News Agency reported on the Pope and on the Church without depicting the Pope as a figure that was distant from reality or from the truth.

For Joaquín Navarro-Valls such professional dedication and ecclesial sensitivity, the fact of being a “spokesperson of the Pope and of the Church”, were essential features to offer religious news capable of prompting reflection to believers and non-believers alike.