Pope Francis in Bozzolo and Barbiana to pray on the tomb and pay homage to Don Primo Mazzolari and Don Lorenzo Milani. The tribute paid to “Italy’s parish priest” and the recognition of the Bishop of Rome to the Prior of Barbiana’s fidelity to the Gospel and the rectitude of his pastoral action

“Parish priests are the strength of the Church in Italy”

were the Pope’s first words in Barbiana, reaffirming that the magisterium of all parish priests – not only that of Don Mazzolari, Italy’s parish priest – does great good to everyone. The river, the farmhouse and the lowland are the three images chosen by Francis to retrace the topical relevance of the message, in a comprehensive speech rich with quotations from the priest: the river, the farmhouse and the plain. Don Primo did not seek shelter from the river of life. Loving his own times was his prophecy:

“Don Mazzolari was not one who hung on to the Church of the past, but tried to change the Church through love and unconditional dedication.” He did not give in to the temptation of “terracing his life”, Francis said speaking extempore.

“Let us have good sense! We must not overburden the shoulders of the poor” the Pope said  quoting Don Mazzolari’s own words, and repeated his impromptu invitation “to all the priests in Italy and in the rest of the world” to make known that Don Primo was the priest of those who are far, not a priest of a ready-made apostolate. The farmhouse, the home, tell us that in order to walk we need to go forth and care for the needs of mankind. Then there are the great plains of the Church that does not do proselytise but listens to the world, “to become a poor Church for and with the poor.” Just as Don Primo “who lived in poverty was was not a poor priest.”  There is a great difference. Don Mazzolari was a priest who knew how to stand in front, in the middle and behind the flock, and many priests like him “could see very far; following them would have spared us suffering and humiliation.” 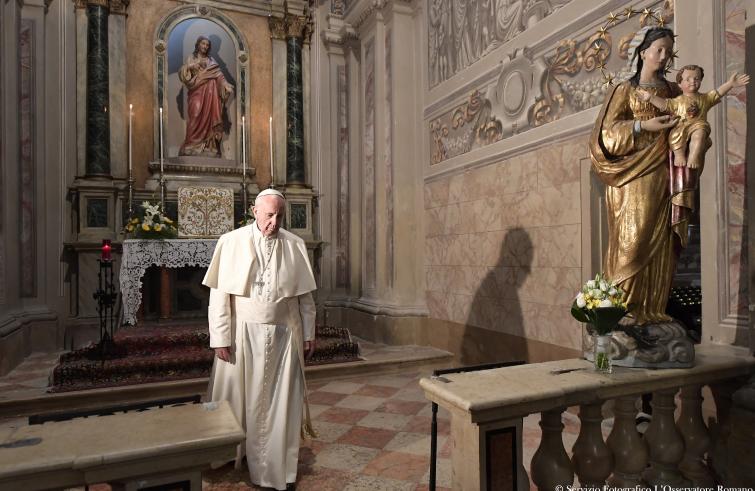 Upon his arrival in Barbiana, Francis immediately used the word “dignity” to convey the meaning and the scope of the good battle conducted by Don Lorenzo. While speaking, his former students, thirty priests – the older ones, who were in the seminary with him, as well as the younger ones ordained last year – along with representatives of the 200 shelter homes of the dioceses of Florence.

“To give back the word to poor people, because without language there is neither dignity nor freedom or justice. This is what Don Milani used to teach. Words will pave the way to full citizenship in society, through work, and to full adhesion to the Church with conscious faith.”

While delivering these words, indicated as encompassing the educational zeal of the Prior of Barbiana, a natural result of his priestly mission, Francis expressed the hope that also in our times – starting from the word – we may experience “the full humanization we demand for all people in the world, along with bread, a home and a family.” The Pope went on to thank all “educators who teach that what is most important is the development of a free conscience. As Don Milani wrote in his “Letter to a Teacher”:

“I have learned that other people’s problems are like mine. Overcoming them together is good politics. Overcoming them alone is stinginess.” It’s an appeal to the responsibility to live freedom as the quest for what is true, for what is beautiful and for what is good, the Pope said. “Without compromise”, he said in  unprepared remarks. 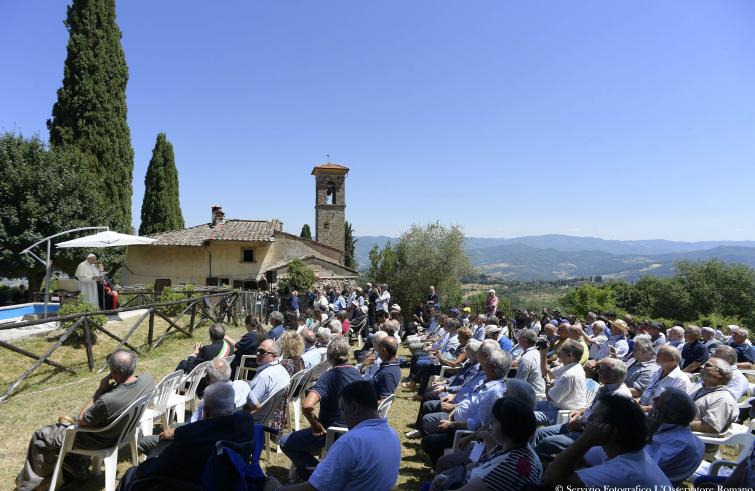 In Don Lorenzo, it all began when he entered the priesthood, and before then it was born with his deep, totalizing faith, “as transparent and hard as a diamond”, as defined by his spiritual father, Don Raffaele Bensi. In the words of his mother, Don Lorenzo was governed by his thirst for the absolute, without which “one can be a good administrator of what is sacred but not a priest”, Francis said. The Pope fulfilled Alice’s wish when as bishop of Rome he recognized the fidelity to the Church and the pastoral rectitude of this son of the Church: “In particular, I wish that you may know the priest, the truth, so as to pay tribute to the Church for what he was in the Church, and that the Church may pay tribute to him.” Today, this wish has been fulfilled.

“The priest who was as transparent and hard as a diamond continues transmitting the light of God along the path of the Church.” “Take the torch and pass it on”, is the Pope’s impromptu invitation from Barbiana.